Which reminds me.  A few months back, almost longer ago than I care to remember, I  determined that a Maple Bar was a most fitting morsel to herald the arrival of Fall.  I had heard it said that Top Pot make Maple Bars that would stop you caring about any kind of weather.  I felt compelled to discover if this was, in fact, true.  So one Saturday, after driving round & round trying to find the Top Pot in Bellevue, I happened upon a parking spot that required less walking than if I had simply left the car at home.  I was somewhat confused upon walking in the door.  Wait.  I wanted Top Pot.  This is Starbucks.  No. The sign says Top Pot.  Hang on.  It feels like Starbucks.  It looks like Starbucks.  Is it me?  Is this really a Starbucks?  Was I confused in that Top Pot just sell their donuts in Starbucks?  No?  Oh.  By this time I had made my way warily to the counter.  After all…I didn’t want Starbucks.  Peering into the display case, this was definitely Top Pot – rows upon rows of donuts, and none of those other goings-on that you’d find in a Starbucks.  Phew.  Secretly, I was still having a touch of coffee shop déjà vu.  Then they gave me china, and all was well in my world. 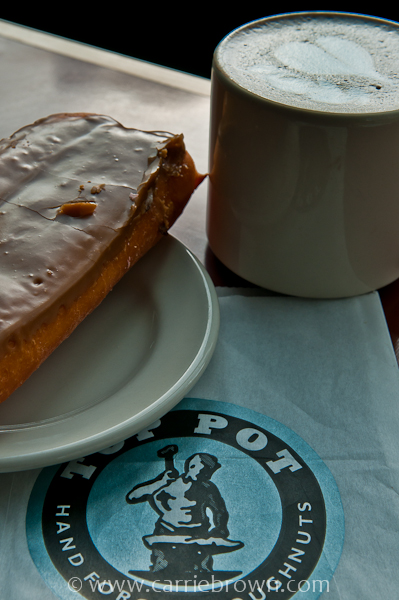 The joint was filled to bursting – mommies & daddies with tots & strollers.  Brightly colored scarves & boots adorned many a tousle-headed, bleary-eyed bambino.  Thick-paged, cartoon-animal-strewn books were scattered across laps & tables from one end of the store to the other.  Only a few bar stools remained, overlooking the drizzly, grey pavement beyond the large picture windows. 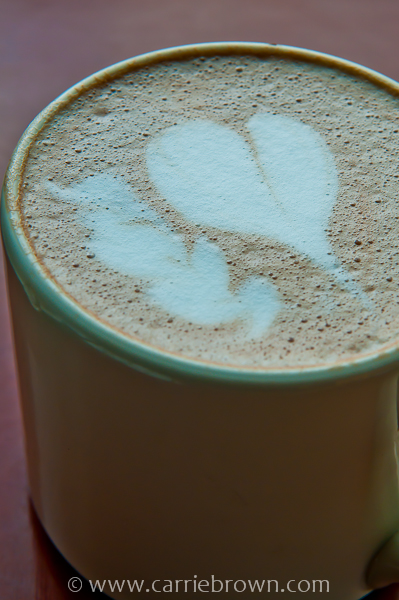 The Hot Chocolate, I’ll have you know, was cute-looking & very drinkable – warm, frothy, not-too-sweet, & chocolaty enough to know it was chocolate.  Plus, served in a china mug.  I slurped contentedly as I swung my legs under the stool at the bar, looking out at the water droplets dripping slowly from the bushes outside. 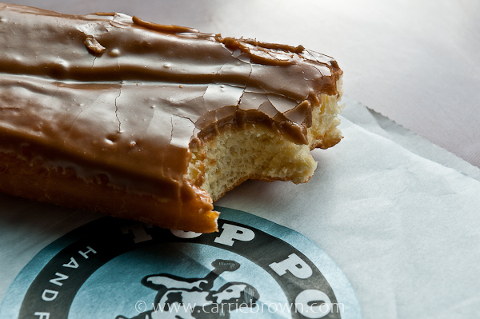 The Maple Bar was delicious.  I was frightened it was going to be one of those “cake” doughnuts.  I still have near nightmares about those things.  Doughnuts should be yeast-risen.  Like this one.  Soft, yielding dough, slightly crusty on the outside & a white line around the middle.  The maple frosting was very sweet but very maple-y.  The entire thing was huge.  580 calories huge.  Now, if calories mattered, I might care about that number, but since they don’t, neither do I.  In other news, I could down 4 Krispy Kremes to one of these.  It’s a BIG doughnut.

It was a short yet splendid stop; and that Maple Bar really did make me stop caring about what the weather was doing.  At least for a little while.  Maybe I’ll go have another one to herald the near arrival of Spring.