Right There On The Doorstep

This was an interesting week.  Like riding on one of those things on top of the Stratosphere Tower:  soaring through the clouds one moment & hurtling towards the ground the next.  Shrieking with joy & screaming in terror.  All in the same minute.  Whoooosh!

Tuesday morning brought the news that I had burst onto the Urbanspoon Worldwide Food Blog Leaderboard at #16.  Hello, W O R L D !  I don’t know how that happened.  #16 read food blog in the world??  Wild.  I can’t even quite believe it.  It wasn’t something that I planned & it certainly wasn’t a goal.  That, however, didn’t prevent it from being wildly exciting when it happened.

Then, a few hours later came more surprise news, only this time it didn’t make me delirious with joy.  Rather I felt like a part of me had been surgically removed.  Consequently, since Tuesday mid-morning arrived I have had the concentration span of a flea.  Since Tuesday I’ve spent a not insignificant amount of time lying in the grass on a pretty blue and white blanket with my cats.  In the sunshine.  Since Tuesday I’ve cried a lot.  Not big heaving sobs kinda crying, more like silent tears slowly rolling down my face and gently dripping off my chin kinda crying.  Crying nonetheless.  And there’s been ice cream.  Chocolate Ice Cream.  Lots of Chocolate Ice Cream.  All of which is rather unusual.  OK, except the lots of Chocolate Ice Cream part.  But I am not a cry-er.  And I don’t lie in the grass or in the sun.  Not often, anyway.  And normally I am a pretty darn good concentrator.  Sometimes things happen that you just weren’t expecting.  Right there on the doorstep.

By Friday I was feeling less devastated emotionally, but nonetheless, was definitely in the mood for a big old pile of comfort food.  I was thinking steak and eggs for breakfast.  Susan, one of Foodie Footnotes first fans, was on the schedule for breakfast and I decided, given that she had to squeeze breakfast in between school runs that we’d better stay closer to home.  After my rockin’ breakfastwith the Montana family the other weekend in Duvall, I decided to take their advice & check out the Woodman Lodgein Snoqualmie.  Checking out the menu indicated they had comfort food galore just oozing out all over.  Perfect. 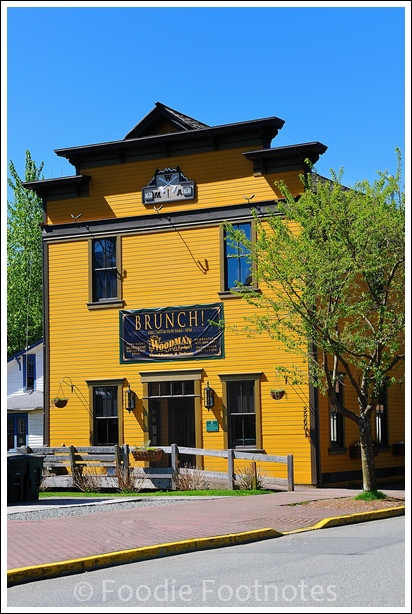 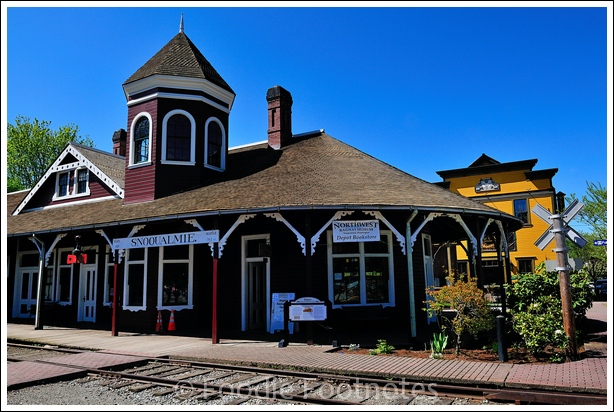 Famous for, among other things, it’s trains.  (Oy, do I ever need a Tilt-Shift lens.  Sigh.) 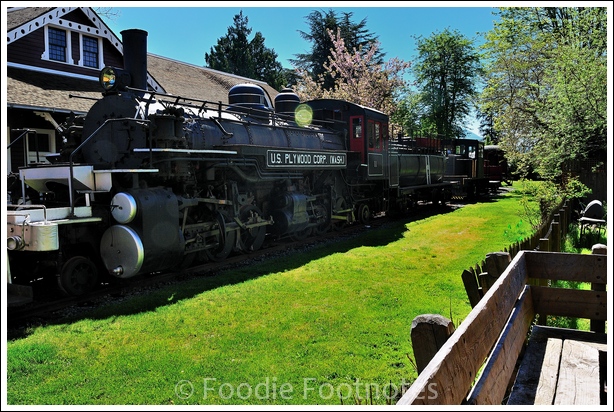 But we were here to check out the Woodman Lodge, not ride on the trains, although I think riding on the trains would have been a blast.  I’ll have to do that one day.

We showed up for breakfast right at 9 am.  I think that given it was a Friday this was probably the first mistake.  The place was empty.  The good news about it being empty is that we were able to pick a beautiful spot in the window.  The second mistake was not realizing soon enough that our server needed another cup of coffee before he became human.  His sense of humor had definitely not kicked in yet.

The inside of the Woodman Lodge is awesome.  They have done an outstanding job of making it full of character.  It was a lovely environment to sit & while away some time in. 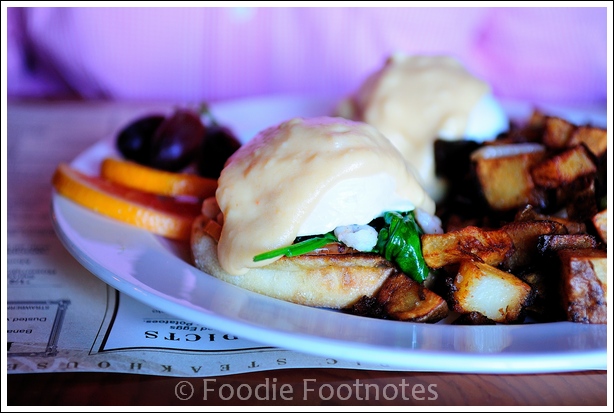 Susan headed straight for the Florentine Benedict ($10) – Fresh Spinach and Tomato topped with our Citrus Hollandaise Sauce and Parmesan Cheese. 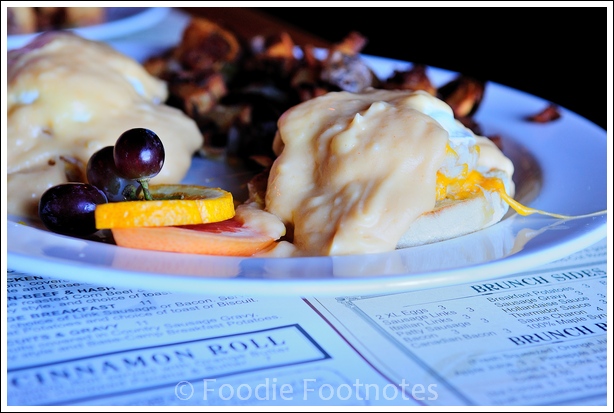 I finally decided against the steak and eggs (my third mistake) & chose theDungeness Crab Benedict ($14) Fresh Dungeness Crab with melted Tillamook Cheddar, topped with our Truffled Thermidor Sauce.  Now I realize that the sauce is a bit on the orange side.  Just bear in mind that it wasn’t Hollandaise, so they are forgiven for the color.  The flavor, though, was indeed a little, well, odd.  Not unpleasant, just odd. 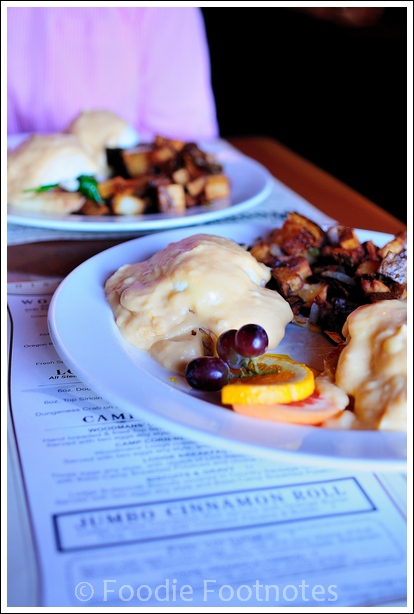 The food, honestly, didn’t wow me, but I suspect, having read the reviews & heard the Montana family’s glowing praise, that this may well have been because they were empty and really not geared up yet.  I think a trip on the weekend is in order.  When they are busy and bustling.

Susan and I hadn’t hung out for ages so there was lots to catch up on.  Including the thing that hit me like a train on Tuesday.  Talking helps.  So do waffles.  Especially when you share them with someone who has as huge a heart as Susan has. 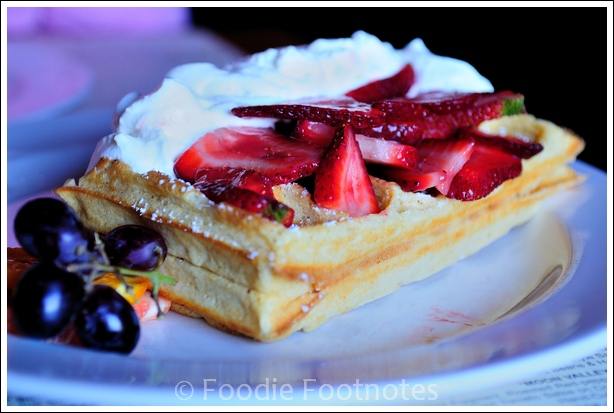 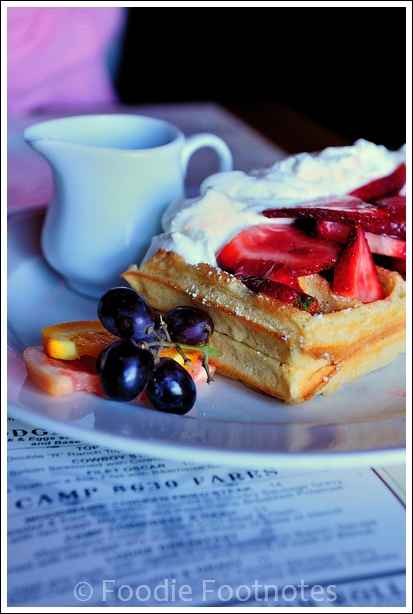 Brunch at the Woodman did the trick in terms of comfort food, but I still feel the need to go back on the weekend when they’re dishing up lots of food.  I am also aware that my mood was not quite there, and I swear that food just tastes better when I’m not sad.

I am excited to go back & try it again.  I am thrilled to know that there is this brunch spot so close to home.  Right there on the doorstep.

0 comments
« The End of the Road
Bleating On »