Last weekend, which seems like an absolute age away now, I stumbled out of my office after another night sleeping on the floor & was determined to go have a darn fine breakfast.  Preferably somewhere that had electricity.  And no snow.  Eastlake seemed a likely candidate.  My HR dude at work had mentioned that 14 Carrot Cafe was a top notch spot for a breakfast, and he is never wrong about anything.  Plus, he is, you know, my HR dude, so I don’t like to disagree with him.  I think things turn out better all round if you don’t go against your HR dude.

Somehow I woke up terribly late.  This is odd since I was sleeping on the floor rather than in my plush, feather-bedded, 600-thread count cocoon at home.  When I finally regained consciousness, my back was killing me & it was 8:38.  Eight-thirty-eight??  Get off the floor, girl!

Over in Eastlake it was as if the Snowpocalypse had never occurred.  Seattle is like that.  Some parts were buried under 3 feet of snow, encased in ice & had lost power 4 days ago.  Some parts were asking what all the fuss was about.  However, when they shut down SeaTac airport, you know things are serious. 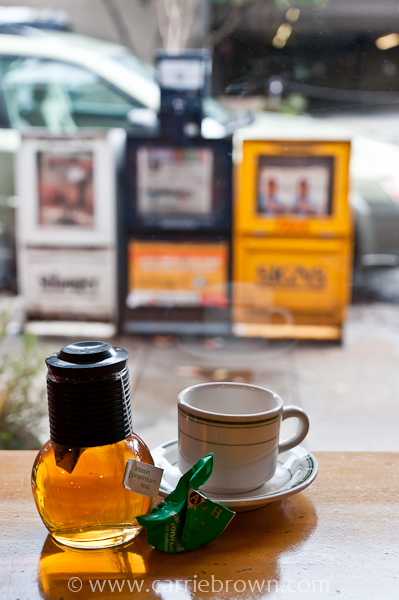 No snow in Eastlake.  At least not outside 14 Carrot Cafe.  Blasted chilly though.

14 Carrot Cafe is large, warm, colorful & the walls are covered in all manner of arts & crafts for sale.  Very homey.  Maybe that’s why I ordered Chicken Fried Steak.  I can think of no other reason why I would.  I mean, Chicken Fried Steak & all that gravy is just not my cup of tea, so to speak.  If you remember, my first encounter with Chicken Fried Steak was a while ago.  Not that it was bad, but I’ve steered clear of it ever since.  It’s a culture thing.

No sooner had I planted myself firmly in a seat by the window, a young lad wandered over to enquire if I wanted coffee.  “How’s your hot chocolate?”, I queried.  I am not sure whether it was the too-long pause, the look on his face or my having watched too many episodes of Lie To Me, but I knew when he said, “It’s good”, that I needed to have herbal tea.  He followed it up with, ‘You know, it’s just the powdered stuff.” 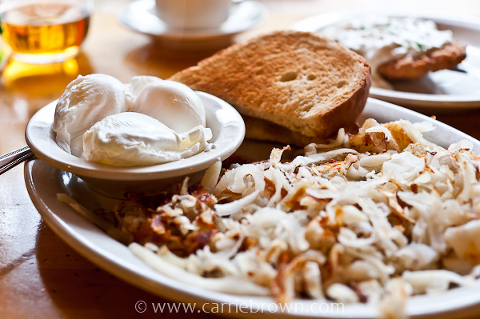 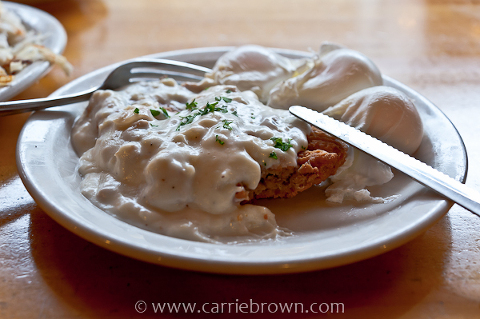 It was a large plate of warm, tasty homeyness.  But it just didn’t hit the spot.  I need to go back for an omelet.  I really think I just didn’t make a wise choice.  So what’s a girl to do?  Head on over to a French Bakery up the street & see what’s going on; that’s what.  HR dude had also mentioned Le Fournil as a good place for something tasty in his Eastlake foodie round-up.  Ha!  A plate of French pastries!  That would make everything right with the world.  And my mouth. 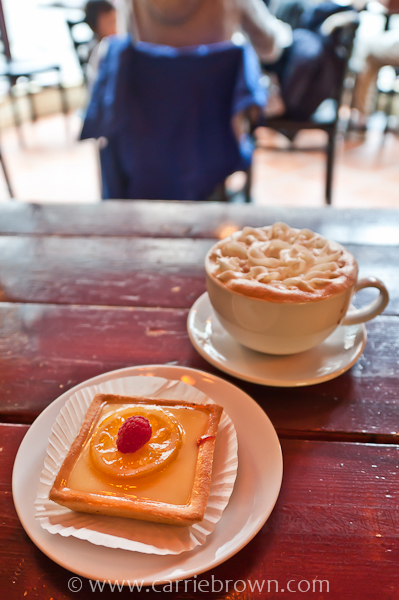 I walked into the cozy cafe that is Le Fournil, over-flowing with people, to find a pastry-case over-flowing with rows upon rows of jewel-like goodies.  My heart actually started to beat faster.  Hot chocolate ordered, I gazed longingly at the multitude of pastries all lined up, wondering which to try.  I stuck with my go-to comparables:  Pain au Chocolat & Tarte au Citron.  I was so excited I could barely stand it. 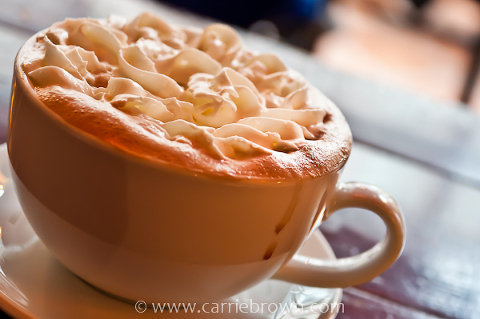 Sadly, my enthusiasm was short-lived.  I discovered the reason the prices were so low: the quality was not high.  <Sad face>  They were not bad.  They were not close to bad.  I just like perfection in pastries.  The Pain au Chocolat was as good as many that I’ve had.  The Tart au Citron was beautifully lemony.  It all went a bit wrong when I got to the pastry case.  It was way too thick and – quelle horreur – there was a layer of raspberry jam between it  the lemon filling.  And that, lovely people, is just plain wrong. 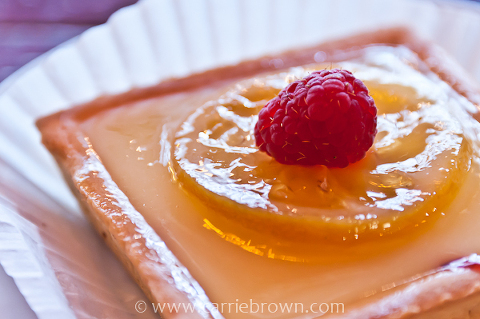 The hot chocolate was fine, the servers were lovely, the prices were amazingly cheap.  Sadly, despite all these pluses, Le Fournil has not made my go-to patisserie list.  However, in case I was just having an off-day, you should know that for the most part Le Fournil is highly regarded as a great French bakery, so if I were you I would swing by & try it out.  Then make your own mind up. 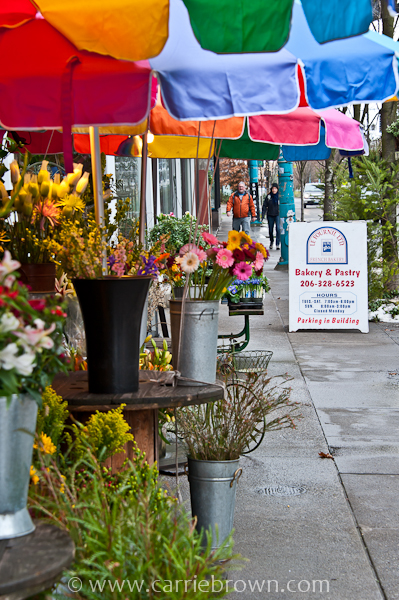 By now almost desperate for something that would make my mouth happy, I scooted back down the road past 14 Carrot Cafe & screeched to a halt outside Grand Central Bakery.  Ah.  Now here I knew, *for sure*, that my mouth would be transported into bliss by a slice of Twice-baked Chollah.  Done. 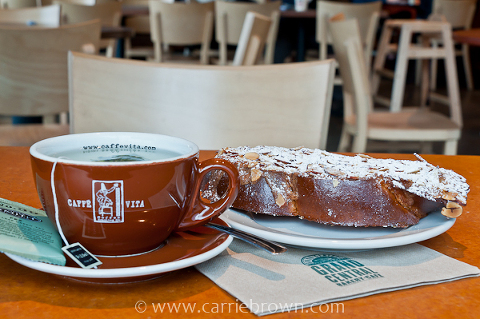 I was not disappointed.  I sat there for ages, supping tea & breaking off pieces of sticky, almondy, delightfully crusty-edged Chollah.  I also played with my new gear.  Because I could.  Grand Central Bakery is a fine place to play with depth of field & all that jazz.  In peace & quiet.  It’s light, airy, spacious & people tend to go armed with books & kindles & laptops & newspapers & other people.  No one even noticed me fiddling quietly in the corner.  I do love to fiddle in corners. 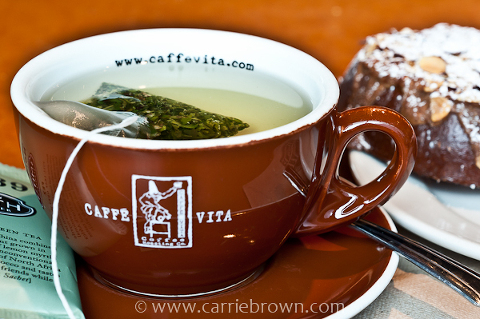 Notice how this shot (above) looks like the cup is photo-shopped onto the background?  It isn’t.  I promise.  And I can promise that because, well, I don’t have photoshop.  It’s interesting how it came out though. 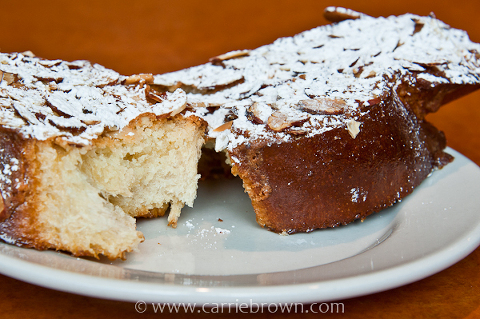 So, after 3 breakfasts, I finally found one that hit the spot.  Like they say, three times a charm.

Things To Do
Seattle

0 comments
« What A Dork {Burger}
They Keep Me Grounded »