I Plunged Right In

I’ve been obsessed with nuts lately.  They seem to have found their way into just about every recipe I’ve cooked since I got back from San Francisco.   I’ve thought about them, dreamt about them, bought them, toasted them, chopped them, shot them and eaten mouthful after mouthful of them.  And then I’ve written about them.  And yesterday The Universe muscled in on the conspiracy when I joined Joany for brunch on the edge of Belltown.

The edge of Belltown is fun.  I got my first sighting of the Space needle in all it’s orange 50th Birthday glory.  Nice job, painters.  Rather you than me though, hanging off the top of that while you put on it’s birthday suit.  I got to see a cop on a horse.  I saw the tram whip by.  I got to see a meter maid on a Segway.  And I got to park magically right outside the door of Mistral Kitchen.  It’s all happening down on Westlake, you know.

It’s been an age since I went downtown for breakfast.  It’s been an age since I’ve brunched with Joany.  Both were long overdue.  Joany zoomed up in her sporty little number a tad late (you can blame the escapee cat + the traffic), but nonetheless resplendent in a hot pink blouse and blue cut-offs, with a pair of adorable, strappy wicker wedges.  I know wicker isn’t the correct terminology here, but I think you get my drift.  They were cute.  Joany is always cute.  Joany had a spot of bother with the parking meter, so I abandoned my gently brewing pot of fresh peppermint tea leaves and ran to her aid.  Those meters can be right tricky little monsters. 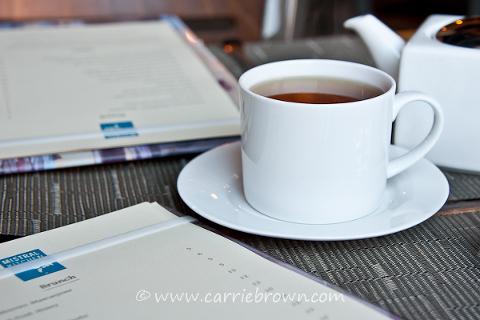 Comfortably settled into our table in the window we had a lot of catching up to do.  Topics included work politics, crazy family members, and men.  In that order.  Which is really odd since normally, when Joany and I get together for a chat, men beat out any other topic of conversation 10:1.  It cannot be good that we talked more about work than anything else.  More than men?  More than food?  Especially when you consider my recent obsession with nuts.  I think it means it’s time for change.  Yes.  Definitely time for change.

We did talk about food for a bit.  Mainly because the food those lovely folks at Mistral Kitchen brought us was *SO* good.  But also because Joany has been reading my recipe posts.  Direct as ever Joany said, “What’s this Friday Night Dinner thing, and how do I get on that ticket?”  I love Joany.  She’ll be showing up for a Friday Night Dinner here real soon. 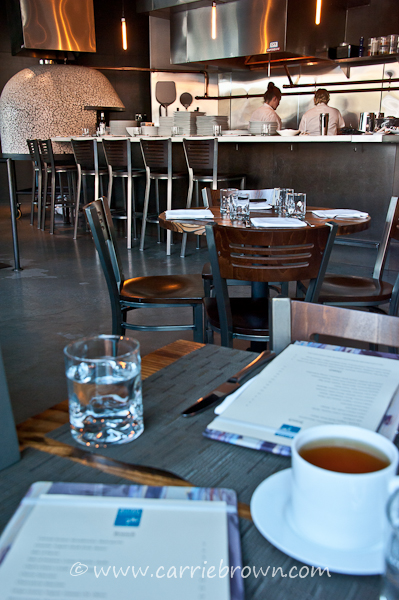 There was nothing SANE* on Mistral’s fascinating menu, so I just plunged right in there and ordered up the Chicken & Waffles.  It was a tough choice though – quite an array of eclectic and tasty sounding creations.  They change their menus daily depending on what’s fresh.  When I heard that I fell in love with them.  They may not cook SANE*, but at least you know the food is fresh and local and organic.  I quote from their website, ““We don’t want strange people or machines touching our food before it gets to us.”  Amen!  If you’re going out for an inSANE* meal, at least make sure it’s comprised of the best, most naturally grown ingredients you can get.  Big gold star for Mistral Kitchen.

The Chicken & Waffles were fantastic.  That was no Foster Farms chicken, people.  I’d never eaten Chicken & Waffles that I wanted to eat again.  I have now.  But here’s where the nut conspiracy comes in: the Chicken & Waffles came with maple syrup, oranges, bourbon and pistachios ($14).  Truly.  Pistachios rolling around my plate with the chicken and waffles.  Pistachios that were fresh – plump and bright green with dashes of purple – and that tasted amazing.  Now I am starting to understand pistachios.  Plus, maple syrup that came out of a maple tree, not out of an Aunt Jemina bottle.  Maple syrup that tasted of maple, and not a gloopy mess of dark brown syrup with added flavoring.   And finally, oranges that used to live on a tree.  Wowzer. 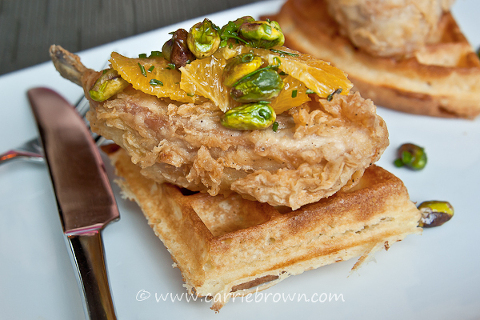 Our long-suffering waiter was more eager to please then we needed him to be.  We just needed time to hang over some great food.  The great food we definitely got.  We had to keep reminding him about needing time to hang.  We were glad that we hung long enough to be ready for dessert.  A rare thing in Seattle is a dessert that knocks my socks off.  Mistral Kitchen served up two of them. 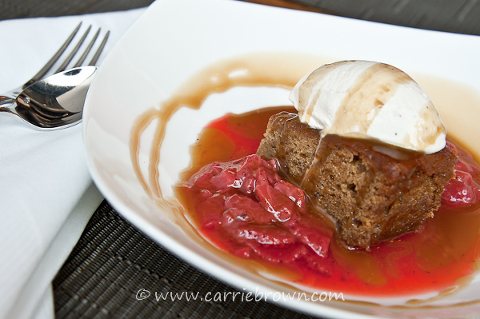 The Sticky Toffee Pudding with Vanilla Roasted Strawberries and Earl Grey Creme Fraiche ($9) stole Joany’s heart.  Those strawberries were hanging on a bush close by, just hours before, I am sure of it.  The caramel sauce poured all over – light and delicious.  The crème fraîche – dreamy.  And the pudding was brilliant – light, sticky, intensely flavored. 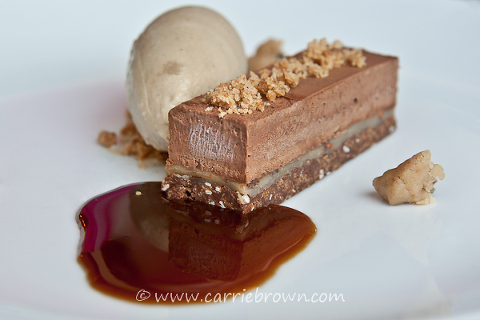 The Bev Bar with Pomegranate Molasses, Halva Crumb, Hazelnut and Coffee Ice Cream ($9) stole my heart.  Joany did not care for the Pomegranate Molasses which imparted a sour zing, but for me it totally cut through the sweetness of the bar and ice cream.  Oh and look – hazelnuts.  Nuts.  More nuts!  It’s a conspiracy I tell you.

The ice cream was fascinating.  It had a texture that was more sorbet than ice cream, and it was the coldest ice cream I have ever eaten – and yet it was spoon-soft, almost no harder than stiffly whipped double cream.  I don’t know how they did that.  It wasn’t as creamy as mine.  It wasn’t as coffee as mine.  Charlie would declare mine the winner.  I just prefer creamier.  The whole dessert was wonderful.  There are some mad skills in that pastry department.

Mistral Kitchen has swooped straight into my top places to brunch.  Straight in.  Nuts and all.