This morning I discovered where the inspiration for Dr. Who’s Tardis came from: an egg.  I know this because I dropped an egg on the floor earlier – and that’s when my whole Tardis theory showed up.  When you drop an egg on the floor you will clearly see that there is {at least} 12 times more gloopy, thick, slipperiness at your feet than could possibly have fit inside the shell it just flooded out of.  So much more on the inside than the outside can actually hold; but this is only true when you drop an egg on the floor – crack one on purpose and there’s only around 3 tablespoons in there.  It’s almost worth dropping one just to see this phenomenon.

Thankfully for the *SANEity of my breakfast, the other eggs destined for the omelette pan remained unbroken until I purposefully whacked them on the side of the bowl.  This was one of those fling-open-the-‘fridge-doors-and-see-what’s-in-there mornings.  You might never have thought to put leeks on your breakfast menu.  Delicious!

Yesterday I went out to breakfast with a girlfriend and her 10 month old, cutie-patootie baby girl.  I posted a ‘phone picture up on Facebook, excited to share how you can eat out and stay *SANE.  Almost immediately, the Head of SANEity over at The Smarter Science of Slim was demanding to know where the non-starchy veggies were.  So here is a picture of today’s home-brewed omelette with one side left open, so Mr. Bailor is suitably satisfied that there was a whole lot of *SANEity contained therein.  Bless him. 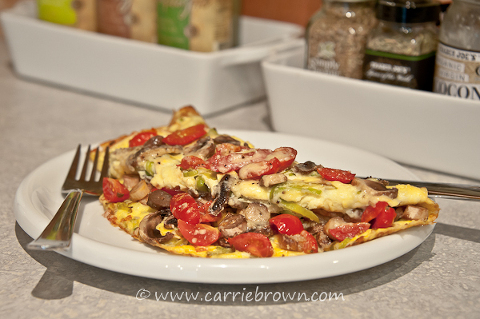 I made this in a 12 inch skillet so that it would be very thin and I’d get more veggies crammed in per inch of omelette.  It also cooks a lot faster, which is critical for me.  Since I went SANE I am SO ready for breakfast when I get up.  LBB (Life Before Bailor) usually meant skipping breakfast and not even noticing.  These days, I’ll start gnawing at the desk if I don’t get some protein in me within a short time after getting up.  Plus, if time is a premium in the mornings, this gets ‘er done quicker.

I don’t like my mushrooms and tomatoes to be mushy, so I cook the omelette without them and add them half way through to cook under the broiler.  Not only are they firmer, but they have a lot more flavor that way.  Yum. 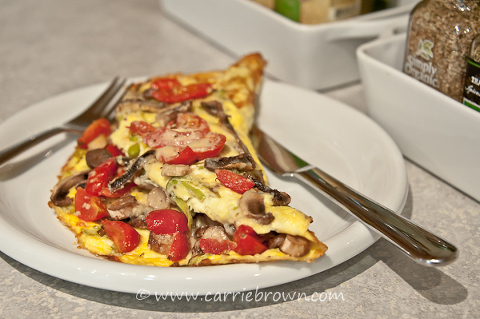