Put Down Some Roots

New Orléans.  The Big Easy.  A remarkable place.  We all saw the pictures and videos of New Orléans in the midst and aftermath of Hurricane Katrina.  We were stunned by the devastation and destruction wrought on one beautiful city.  Afterwards, we heard countless tales of the people that came back – often to nothing – and who then picked themselves and their neighbors up, and started rebuilding the city that they loved.  Not even a disaster on the scale of Katrina could stop the determination and resilience of the New Orléans natives.  Nothing could stand in their path for long.  Those people have deep, deep roots.

While I was taking care of business in New Orléans last month, I made sure to sneak in a little play time.  I snuck out a couple of times to get acquainted with any parts of New Orléans that were not the Convention Center or the Marriott Hotel.  You know how it is on business trips – you see the airport, the inside of a cab, your hotel, and the Convention Center, and pretty much nothing else – you may as well be in Idaho.  Then you get back home and feel dishonest telling people that you’ve been there.  I decided the instant I heard I needed to take a trip to Louisiana that I wanted to come back able to say I’d been to New Orléans.

The day after I pulled into town I got up with the larks and went for a walk.  Turned out to be quite the hike – about 10 miles by the time I got back to the hotel later that afternoon.  The weather was simply splendid – warm, sunny, big blue sky.  I broke a cardinal style rule when I tied my hoodie around my waist, but the locals didn’t seem to care – everyone I walked by shouted out a cheery, “Hi!!”  It’s terribly friendly, is New Orléans, I found.  One thing I didn’t know until I became aware that everyone seemed to be wearing green – it was St. Patrick’s Day weekend.  In New Orleans.  If that ain’t a really scary prospect for an introvert, I don’t know what is.  All I’ll say is, they sure know how to throw a {BIG} street party in NOLA. 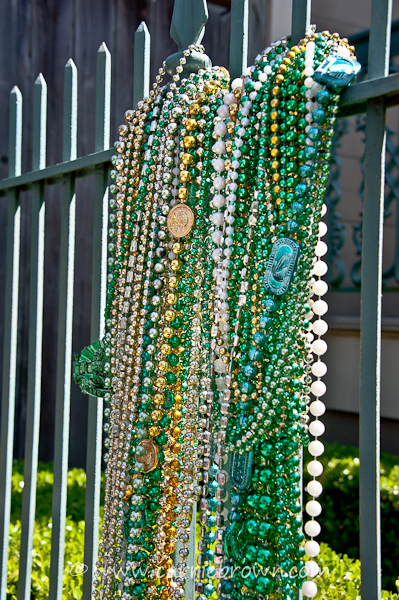 As I strolled down Louisiana Avenue and wandered the Garden District in the warm sunshine – shooting as I went – I noticed something very striking about the sidewalks.

The sidewalks, and in some places the road too, were raised and broken around the base of every tree that lined the streets; like mini-earthquakes had erupted under each one.  The massive, gnarly, lumpy roots pushing, shoving, and cracking concrete, bricks, and paving slabs skyward.  Where the concrete was too thick, the roots bubbled over the edges, spilling over the pavement like slowly creeping lava.  No matter what, nothing was going to stop those roots from doing their job of providing a strong foundation for the tree they supported, and supplying it with all the nutrients required to keep the tree flourishing.  Looking at the roots progress on the surface made me wonder how huge and deep those roots must run underneath.  The people of New Orléans aren’t the only ones with deep, deep roots. 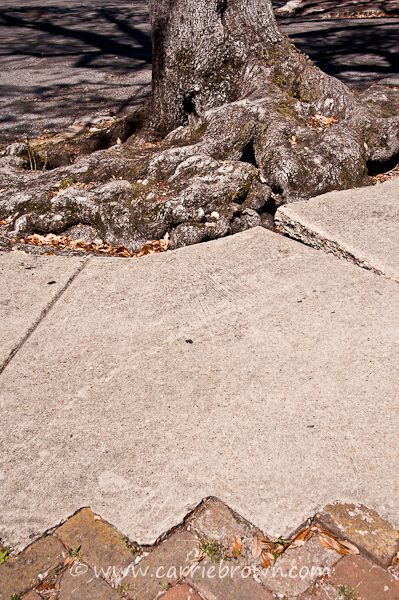 I sauntered along on that sunny Saturday morning, mulling over in my mind how and why the tree roots in New Orléans had developed like they had; then I remembered Katrina, and thought about all the other violent weather systems that have relentlessly battered New Orléans over the years.  Centuries of wild, hurricane-force winds and  lashings of torrential rain for days at a time.

It occurred to me that when strong winds blow – and in the case of New Orléans we’re talking about *really* strong winds blowing – the trees grow and develop incredibly strong roots in order to stop them from being ripped out of the ground by the force of Mother Nature.  These trees have developed roots so strong that they have altered the environment directly around them.  They do not let anything get in their way – not even concrete or stone.  Nothing keeps them from their goal of developing strong enough roots to be able to stand their ground – even when the going gets hurricane tough.  For them it’s a question of staying strong and healthy; it’s a question of survival. 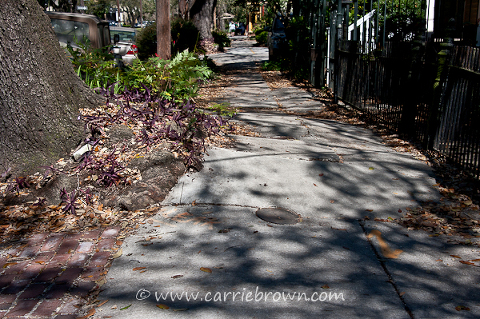 Back home in Washington, it was time to prune the wisteria ready for spring.  I hacked off vine after vine – even those that were already in bud with leaves and pendulous racemes of flowers.  As I stood there randomly cutting and sawing (because I really have no clue what I am doing, I just wanted it to be a cuter shape) I thought about how it really didn’t matter what I did to the top of the wisteria.  I could shamelessly hack off any of the vines – leaves and flowers and all – and in no time that wisteria would bounce back even more vigorously than before; sending out new shoots so fast you’d think you were watching a time-lapse video.  As long as I didn’t damage the roots, it would all be goodness.

It seems to me that roots are where it’s at, people.  As long as the roots run deep and strong, everything continues to grow and flourish.  As I stood there in my yard, loppers in hand, I realized that the principles are the same with living a SANE lifestyle.  There will be times when things get tough; when the winds of illness, stress, and sadness blow.  Sometimes they will blow hard.  Real hard. There will be times when criticizing friends, family, and colleagues take a swipe at your lifestyle – cutting you down, attacking you, and hacking at your self-esteem. 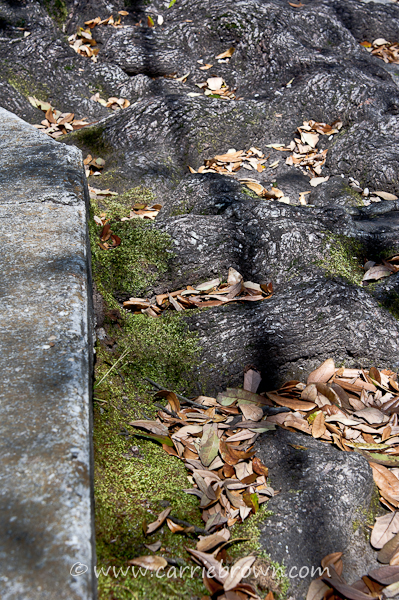 In order to survive and thrive through all that life throws at us, we need to make sure that we have great roots – roots that will keep us nourished, growing, and standing strong.  Roots that run deep.  When life happens and you are being battered by things that are threatening your path to *SANEity, you’ll find it so much easier to stay on track if you’ve grown some strong roots.

Here’s some ideas for root development:

The winds will blow.  If your roots are strong enough and deep enough you’ll survive and thrive.  Focus on the roots and the rest will follow.

See?  It’s amazing what can happen when you’re pruning a wisteria or strolling along a sidewalk in New Orléans.