Cupcakes for Breakfast.  AKA The Frtiz’s Final Farewell.  Sob.

What better way to send off a super cute couple on their crazy Big Adventure than to go on a crazy Big Breakfast Adventure.  And then eat cupcakes afterwards.  And, you know, because this is my blog & therefore I can, I am going to start with the cupcakes & then do the breakfast.  I am certain that Fritzy would approve.

We went to Ballard.  I had never been to a Cupcake Royale store.  Somewhere in a distant corner of my mind I think I may have heard of them, but never been there done that.  Cupcakes are another strangely American fetish that I don’t quite understand but am slowly getting into the spirit of.  Being a Pastry Chef I have been {very} leery of most American cakes, but with the Cupcake Revolution having hit the beautiful US coastal cities like a tsunami that is now flowing unstoppably inland, I figured it would be OK to dip my toe back in the water a time or two to see if American cakery had improved. 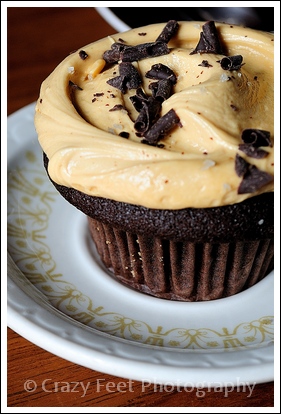 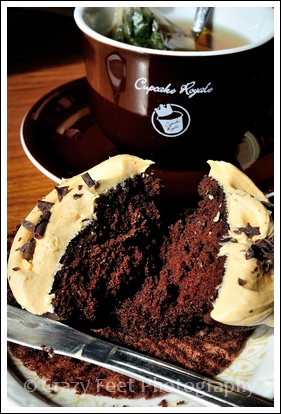 It would appear it has in certain instances.  I still struggle with the texture of cupcakes.  And some of them are so flavorless, despite their cartoonish colors enticing you into believing that the flavor was going to knock your socks off.  Cupcake Royale’s Salted caramel Cupcake was a tad disappointing, which could easily have been fixed with a few more sprinkles of sea-salt adorning the top.  It was just too caramel & not enough salt.  It also wasn’t very chocolatey.

Miss Connie went with some wild pink huckleberry (I think) cupcake.  The color made it look like your tongue would explode with intense huckleberry flavor, but alas, no such luck.  It did look fantastic though, especially lined up in the display case with all it’s mates.

Fritzy & Mr. Fritz busied themselves with a couple of mini cupcakes, no clue what flavor, but they sure were cute & poof!  gone in a single bite.  I wonder if cupcake fever has landed in Australia?  Or maybe it started there?  Maybe Fritzy could open up the first cupcake store in Brisbane & make her fortune.  Ooops…looking online now & the cupcake craze has definitely hit the Ozzie shores as well.  The upside, Fritzy, is that cupcakes is one thing you won’t be pining for. 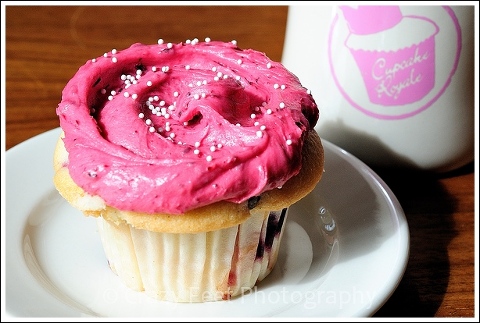 Our little foray into cupcake nirvana was delightful, even though I am not yet convinced that Cupcake Royale has great cupcakes.  It was just lovely sitting in the cafe, sipping peppermint tea, eating cupcakes & enjoying Fritzville for the last time in who-knows-how-long.  I will sure miss Fritzy’s smiling face & happy giggles & those funny faces she always pulls when a camera appears.

Now onto Part 2 (or maybe that should really be part 1) of this Big Breakfast Adventure.  Up next:  Breakfast at Senor Moose…