Across the Pond | Pork Pie Passion

I am not sure quite what it is about pork pies, but I think they’re (to steal Natasha Reed’s delightful quip) stinking awesome.  Another one of those crazy British staples, pork pies are like nothing else.  Made with pork pie pastry (aka hot water crust pastry), they are a bit of a bugger to make.  So I almost never do.  It’s just plain easier to buy them, and, I must add, pork pies are one of the things that can be every bit as good from the store as the home-made variety.  Mind you, there’s pork pies & then there’s pork pies.  Not all pork pies are created equal.

You can tell a mass produced pork pie from a hand-raised (literally, built by hand) pork pie because hand-raised pork pies are a bit wonky, unlike mass produced ones which are made in molds & end up being all straight & regular.  Not necessarily any difference in taste, they just look different.  Hand raised pies are more rustic looking.  All wibbly-wobbly.  A lot like  much of England. 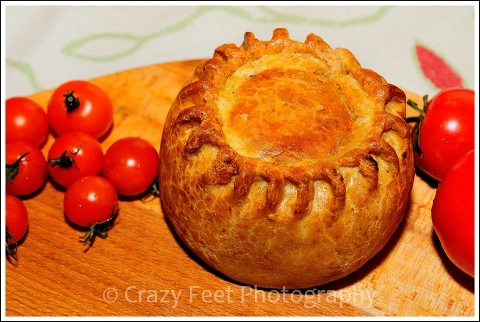 A rather fine Pork Pie (Tomatoes courtesy of my brother's garden)

Pork Pie is always near the top of my “must eat” list when ever I de-plane at Heathrow Airport.  Even if I am just passing through.  There’s no snack quite like a pork pie.  Or a scotch egg, but that’s another story.  Eeek.  I just realized while writing that last line that I spent over 2 weeks in England & didn’t eat 1 scotch egg.  Quelle horreur! 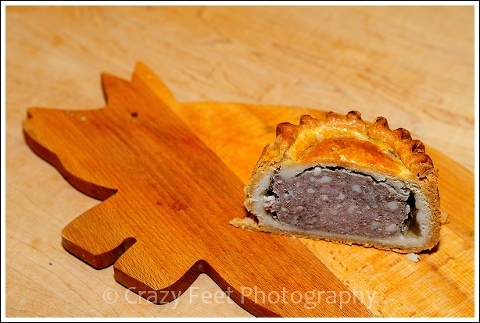 My lovely sister-in-law always remembers my need to eat pork pie whenever I turn up.  This time was no exception & pork pie duly arrived at the house the day after me.  This time though was all the more charming because I experienced the {utter} delight of listening to my 2-year-old nephew say “pork pie”.  I wish I had an audio clip of it.  Precious.

Pork pies are generally eaten for lunch, with a lovely green salad & a large dollop of chutney.  Oh!  I just remembered that somewhere floating around in my stash of food photos I have a shot of my brother’s rather fine home-made chutney.  Now, where IS that hiding?  Oh silly me.  I have a whole new post on chutney in the wings.  That’d be where the chutney picture is lurking.  For now, humour me & just imagine the chutney.

I’ve been eating pork pies for donkeys years & yet disturbingly, I simply cannot recall my first pork pie.  I am not sure it was even something that I had while I was growing up.  It might have been one of those things that my brother introduced me to when I was visiting him in Leeds one time.  Leeds being “up North” in Yorkshire where all good pork pies originate from.  Those Northerners have come up with some pretty tasty food over the years.  I hold my brother responsible for many of my later foodie discoveries.  I am pretty sure pork pies were one of them.  I do recall that pork pies were something that I just lovedthe first instant that the first one hit my taste-buds.  I also recall making them at The National Bakery School where I trained. 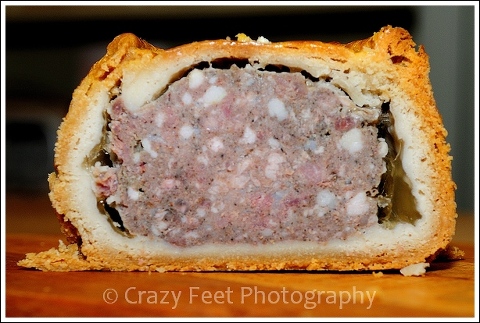 Check out the jelly between the pastry & the meat...

Hot water crust pastry  is just different to any other pastry.  In terms of recipe & method it is most similar to choux (cream puff) pastry, but the end result is {entirely} different.  Choux pastry you generally pipe with.  Hot water crust pastry you construct with.  This construction is very important, since if there is the slightest tear or orifice in the pastry, the pork pie will go horribly wrong once you get to the final stage of it’s lengthy production:  adding the jelly.  The trouble is, you might not notice anything amiss with your pastry crust until you get to that stage, by which time it is, of course, too late.  Like I said early on…it’s a bit of a bugger to make, is pork pie pastry.

I wish I could find the words to describe what a pork pie tastes like.  But there nothing else that I have eaten that reminds me of a pork pie, except…another pork pie.  I did just find this rather fine looking company in New York, strangely enough called The English Pork Pie Company, that reputedly makes Pork Pies every bit as good as those in England.  I might just have to place an order.  The thought of not having to wait another year to eat a pork pie is really rather exciting.  Of course, it still won’t be quite the same as eating pork pie in England:  there’ll be no wibbly-wobbly streets to match the wibbly-wobbly walls of the pork pie, there’ll be no gorgeous blond curly-haired 2-year-old saying “pork pie” in a way that is entirely his own & there’ll be no salad freshly plucked from my brother’s garden.  But a soon as a piece of pork pie hits my lips I”ll be transported there in my mind, and that’s a pretty good second best when you’re 5000 miles away without a plane ticket.