It’s the Holidays.  Like we needed an excuse to head downtown for a slap-up meal & a few hours of laughter.  The slap-up meal we definitely got thanks to El Gaucho.  As for the laughter…between Nitzi’s tales from her recent trip to Syria where she was almost recruited as wife #3 to Abdullah, & Gary’s penchant for using amusing Aussie slang such a “budgie smugglers” (aka Speedos)…it was guaranteed.

I had never been to El Gaucho, known as The Northwest’s Steakhouse Legacy, before.  Heard lots about it but hadn’t ventured through it’s doors.  The outside of El Gaucho looks like a nightclub – you know – plain, dark, rectangular building with almost no signage, windows or anything else.  Blink & you’d miss it.  If I hadn’t had the exact address I may well have missed it.  I waited outside for several minutes for the valet to appear so he could whisk my car away, but he never did, so I drove round the corner to start my quest for a parking spot or car park.  Incredibly, as I turned the corner there was a free spot right there.  Done.

Despite it’s external appearance, once through the two sets of double doors on 1st Avenue, it was like entering into a whole new world.  The cavernous interior is as far from plain as you can get.  It has the vibe of a Fred Astaire & Ginger Rodgers cabaret movie set…dark, glamorous, sophisticated, buzzing…and brimming with happy diners.  I half expected the Big Band to strike up & Fred & Ginger to come twirling down the aisle.  I was half disappointed when they didn’t. 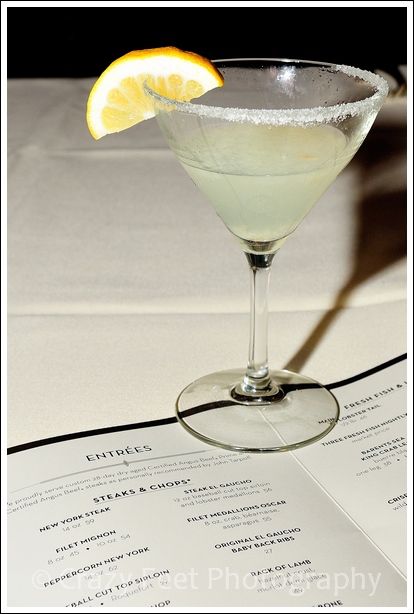 The staff at El Gaucho are the business.  Every time I came within 3 feet of a member of the wait staff they stepped aside to let me pass with a little bow or a genuine “After you” or “Good Evening” or “Excuse me”.  I was quickly whisked off to our private room where I was immediately greeted by the lovely Lisa.  And the rest of my party.  I was meant to be the first to arrive but in reality I was the last.  I hate it when that happens.

We drank cocktails, we sat, we listened to Lisa’s opening gambit about the whats, whys & wherefores on great steak & table-side salads & then we were off to the menu while a bevy of servers brought in appetizers for us to share. 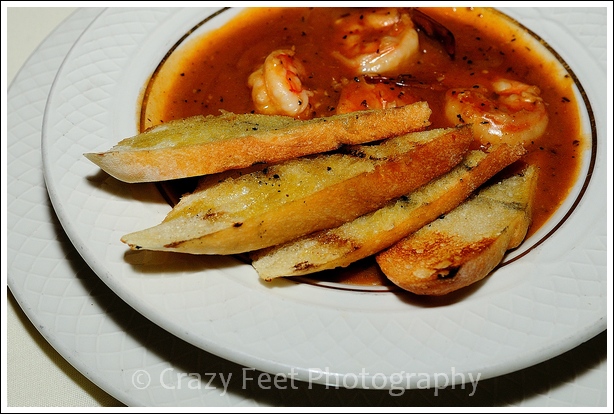 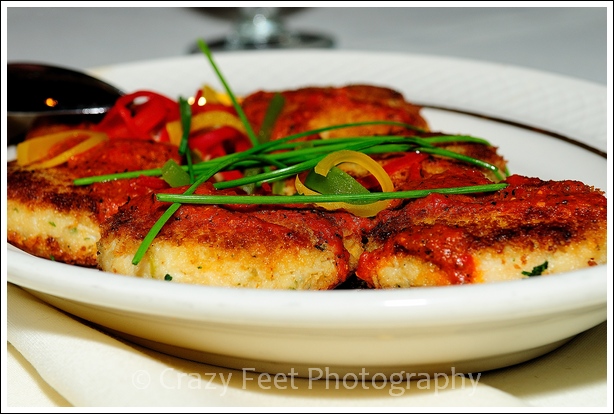 We munched on the appetizers, during which the always effervescent Nitzi shared stories from her Syrian adventures & Lisa stood table-side whipping up two delicious fresh salads.  The salads were duly delivered.  I am not quite sure how we all ended up with salad, since I don’t remember ordering it, but it turned out to be a very fresh & tasty post-appetizer entree pre-amble. 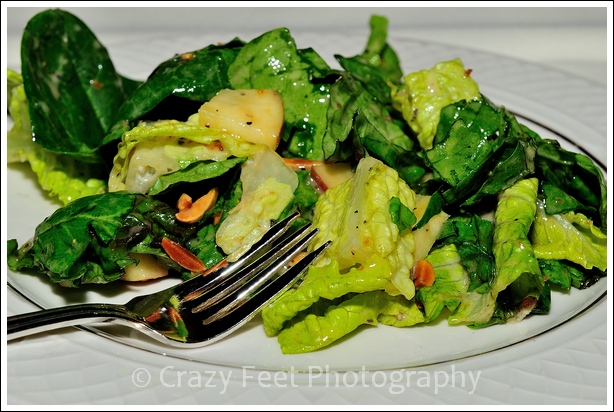 Made table-side - salad as fresh as you can get

Most everyone ordered some variation of steak.  I was torn between the Rack of Lamb & the Venison Chops.  Due entirely to the addition of port wine Bing cherry sauce, my vote went to the Venison Chops, alongside Geoff’s quip of  “If she is not taking photos of them she likes to eat them”.  Had that sauce been on the rack of lamb, it would have been a very lamby night for me.  I haven’t eaten venison for ever, & I had forgotten how deep, dark & rich venison is.  Or how huge deer chops are compared to lamb chops.  My only gripe:  nowhere near enough of that port wine Bing cherry sauce.  Had those chops been swimming in it, it wouldn’t have been too much.  As the waiter placed my plate in front of me he whispered “Great choice.  This is the best thing on the menu after the steaks.” 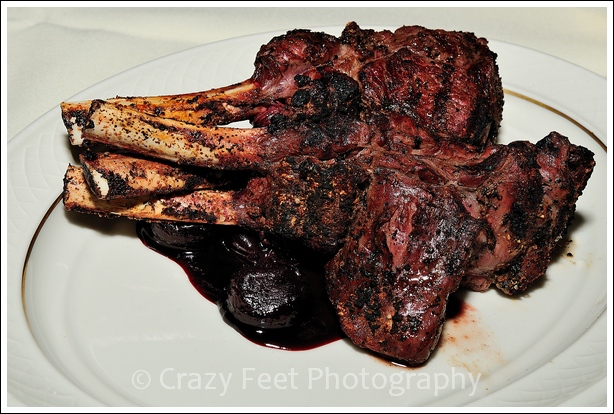 And then there were the sides.  Clearly a sister restaurant to The Waterfront, the shareable sides came buffet-style to the table.  Lisa had pre-deteremined we would have Roasted Sweet Corn, Lobster Mashed Potatoes & Asparagus.  Great choices.  I asked Lisa to add Gaucho Mac & Coastal Cheddar Cheese, which of course she was delighted to do.  I can’t tell you how glad I am that I did that. 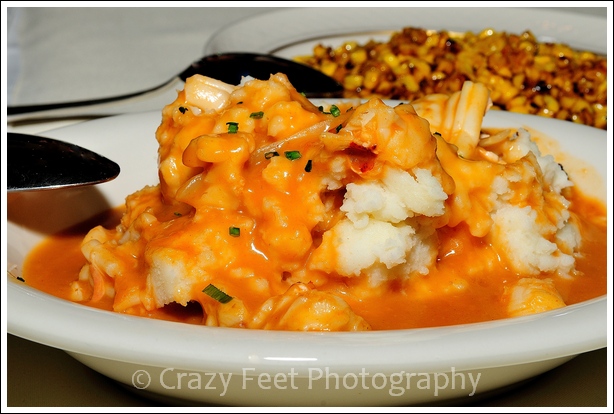 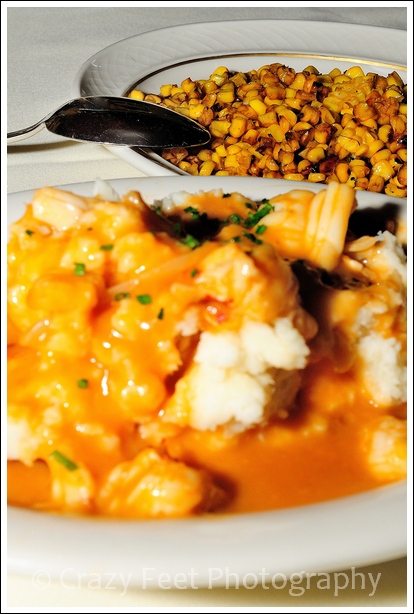 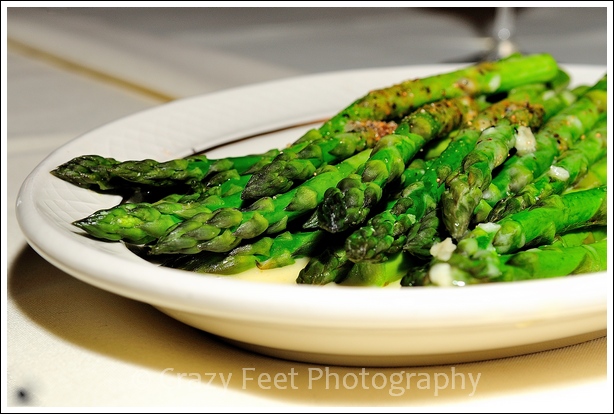 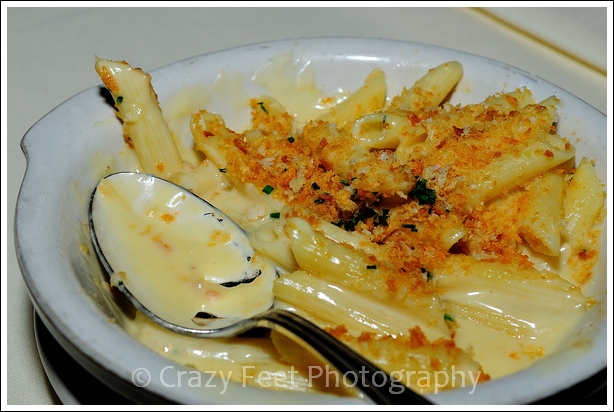 For me the star of the entire show was that Mac & Cheese.  My neighbors all agreed.  The Mac & Cheese was ridiculous.  I could happily have eaten all of it, that’s how happy my mouth was about it.

Surprisingly after a meal of that size I didn’t feel like I was about to pop.  So dessert seemed like a possibility.  Then Geoff determined that dessert was mandatory.  Well, this is the Holidays, after all.  Dessert it would be.  I desperately wanted a Cream Soda Float but I was in little doubt that if I went that route I truly would go pop.  I just couldn’t make my mind up.  Remembering my dessert disappointment at the Waterfront, I wondered how El Gaucho’s dessert offerings would stack up.  Several of my fellow diners went for the Chocolate Bourbon Cake, but for reasons that elude me completely, I just wasn’t in a chocolate kind of mood.  Nitzi was trying, in vain, to get me to share her Banana Bread Pudding, but I just wanted my own dessert.  I had heard rumors that the Bananas Foster were to die for, but they were meant for two & I knew I couldn’t eat that much. 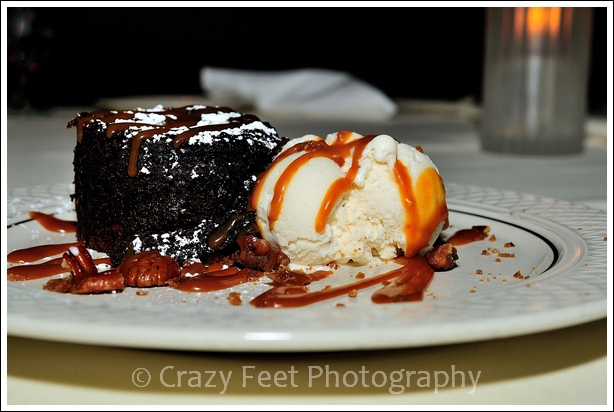 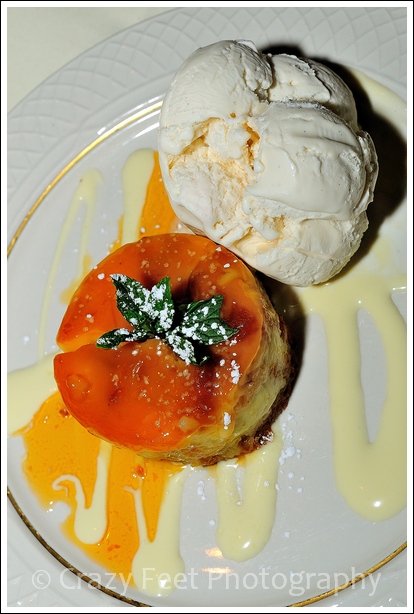 Finally  I opted for the Granny Smith & Fuji Apple Tart.  A la mode, of course.  When it came, it was HUGE.  If it had been half the size it would have been ample.  I am still struggling with it being called a tart.  Although it wasn’t covered in pastry, it was covered in a {tasty} strudel-like topping meaning that it really wasn’t open…which tarts are. 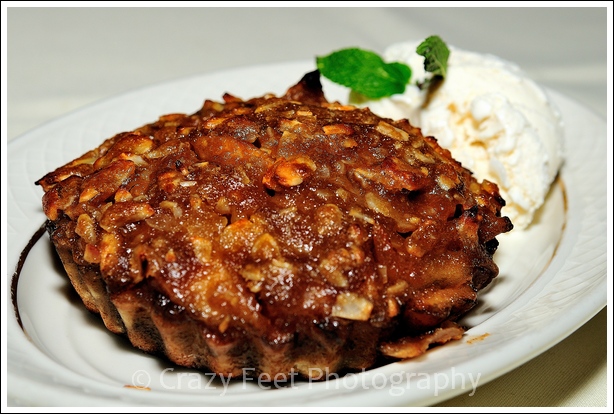 Granny Smith & Fuji Apple Tart (except it's not really a tart)

Anyway, aside from my pedantic-ness with its name & my inability to choose the correct F-stop for the above image, it was a {very} fine apple tart.  That photograph also does not give a very good sense of the size of the thing.  Truly, it was huge.  Which is why I stopped eating it shortly after I took this image: 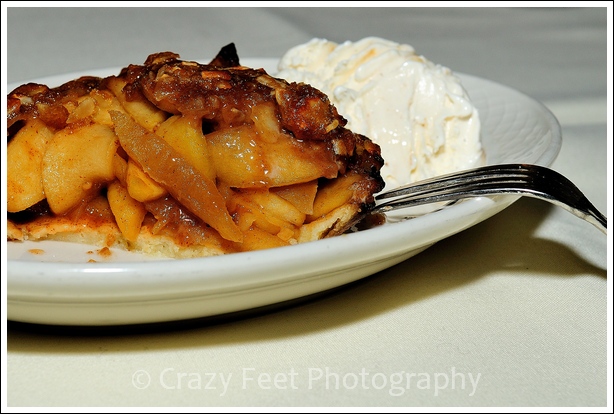 It was a tasty tart, although I would have enjoyed it more had it been warmer & I have to say (since I have become a bit of an ice cream snob over the last 18 months) that the vanilla ice cream did not do El Gaucho justice.  There are {plenty} of gourmet ice cream houses around if you don’t care to make your own.  And if this is your own, you might want to re-think the recipe, just a tad.  El Gaucho deserves more than just ordinary vanilla ice cream.

Geoff brought the {wonderful} evening to a close by delivering a box of Baratti e Milano chocolates to each of us.  There’s a story there, but I’ll save it for another post.

The things that stuck out for me from my first El Gaucho experience are:  1. the ambiance 2. the wait staff & 3. that amazing Mac & Cheese.

Thanks El Gaucho.  I’ll be back.