We Need To Talk. Again.

Remember when I shared my fatal attraction for Kentucky Fried Chicken?  Well, you’re going to have to forgive me, because I am at it again.

Sometimes I just have to do it. Every now and then I am simply overcome by a force more powerful than life itself.  Or at least more powerful than my ability to resist the urge.  Yes; once in a while I go to McDonald’s.  It’s true.  And I eat a Quarter Pounder with Cheese.  Without any pickles of course.  Hey, if you’d spent every Saturday, and every day during every school break for 4 years up to your elbows in a large, green, freezing cold pickle bucket, you might not be so excited about eating pickles either.

Yes, I worked at McDonald’s for 4 years – which given what I do now makes it rather ironic.  And amusing.  Every Saturday during the school terms & full-time during the school vacations.  It was quite the experience.  I ended up earning all 5 of those stars on the yellow name tags that everyone used to wear, and then at some point I made the big time by getting the “Training Squad” patch sewn onto the left arm of my stylish navy-blue-&-white stripey uniform.  I think I got a pay raise at that point too.  That was nice.

McDonald’s was hard work.  I think it is a lot more automated now, but back in the day I would have defied anyone to single-handedly do a 12-turn on the Quarter Grill for any appreciable amount of time without breaking a {serious} sweat.  A one second slip was all it took to get out of sync on that grill & if you weren’t going flat out it could oh so easily be all over in a matter of minutes.  Same goes for the fry-bagging station.  And the Mac grill.  I only know a couple of people at our store who could keep up on the Mac grill during the Saturday rush.  I wasn’t one of them.

But when it came to running the Backroom – I was the bomb!  Backroom involved keeping the entire store stocked up with whatever everyone needed, from milkshake mix to frozen fries, re-hydrated onions to hamburger patties, ketchup to buns, drinks cups to coffee grounds.  The Crew would shout out what they needed & I would go run to fetch it & take it out to them.  It was the hardest & craziest job ever on a Saturday.  I was one of the only people who had ever been able to keep up single-handedly.  I remember one Christmas, I think it was the Saturday before Christmas Eve, I was assigned to Backroom & my helper didn’t show up.  Instead of whining & professing it was impossible, I decided to just go for it.  It was completely mad.  Much to the entire store’s complete surprise, I aced it.  By 3 pm I was completely exhausted, but the kudos afterwards for having achieved what no one thought was possible, magically made it all better.  I even wanted to do it all again. 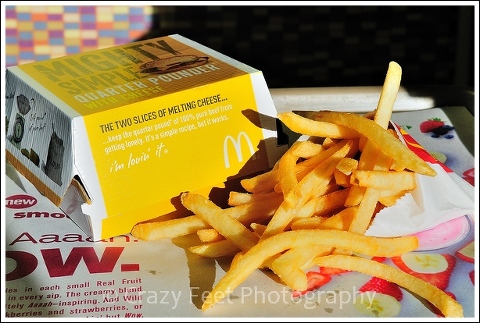 So I spent every Saturday for 4 years eating the exact same thing:  Quarter Pounder with Cheese (no pickle), large fries, apple pie & a Chocolate Milkshake.  All those calories I ate?  Burned off every last one of them.  Think flippin’ burgers is easy?  Try working at the second busiest McDonald’s in England on a Saturday when the queues (lines) are 9 tills wide & 10 people deep non-stop for 5 hours between the hours of 10 am & 3 pm.  I needed all those calories just to stop me from passing out; all 98 lbs of me that there was back then.  It was a riot!

A few things have changed.  The Quarter Pounder boxes used to be foam instead of today’s cardboard & I swear that the burgers are smaller.  The quarter bun, for sure, is smaller.  Hey, I ate at least 400 of the things during those 4 years that I worked there.  And I made hundreds more.  Trust me.  Those buns are smaller.

Nowadays there are fresh sliced onions.  Way back then they were de-hydrated & had to be soaked for 30 minutes before you could use them.  And the menu is a lot larger now than the simple old days.  No fancy coffee, no salads, no McFlurrys, no breakfasts even.  No cookies, no snack wraps, no chicken sandwiches, no smoothies.  I remember the introduction of Chicken Nuggets.  I remember the day McMuffins arrived.  I have lost count of the number of egg yolks I pierced over the years so that the yolk wouldn’t drip on a customer when they bit into their McMuffin.  Good times! 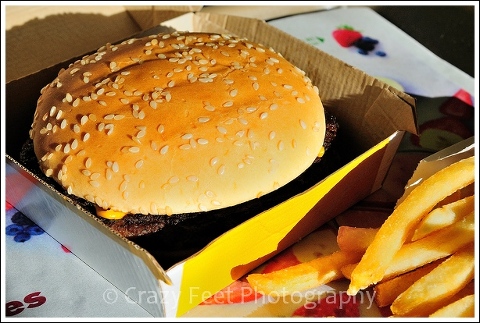 But McDonald’s isn’t close to my heart simply because I spent so many hours of my life there.  McDonald’s is where I fell in love.  Hook, line & fry basket.  Only I didn’t know quite how much at the time.

Despite the grills being fired up at 450 degrees & the shortening for the fries being close to the temperature of volcanic lava (& yes I have the scars to prove it!), this guy was still the hottest thing at McDonald’s.

He was on the same gig as I was:  weekends during school terms & full-time during the school vacations.  McDonald’s is not a bad way to get yourself through school.  The only difference was that he was a Floor Manager & I was Crew.  I don’t remember the first time we met.  I don’t remember when the sparks started to fly.  But oh my, did those sparks ever fly once they did start.

I wonder if he ever thinks back to those days; those Friday nights when he was the manager wrapping burgers behind the production bin & I was on the till serving customers in my fetching blue & white uniform, adorable little pigtails (braids) & jaunty McDonald’s cap.  Oh & one of those cool yellow name badges with all the gold stars on.

I’d put my hand into the chute to retrieve the customers burger & there would be his hand, for just a second touching mine where no one could see.  Those little sideways glances over the fountain drink dispenser.  That little brush of our arms when we just happened to be bagging fries at the same time.  And inevitably the odd {forbidden} stolen kiss in the store room or the freezer or the calibration room where the syrup tanks were hooked up to the soda dispensing machines.  We did that for a whole year.  No one had a clue.  Oh yeah, we were good.  And then we just couldn’t stand it any longer, so he moved himself to a different store & no one was any the wiser.  You should have seen the looks on the faces of all the crew & managers at my store when I turned up at our Christmas party with him on my arm 2 weeks later.  PRICELESS.  Only trumped by the stunned gasps when they realized we’d been dating for a year, right under their noses & not one of them had figured it out.  SO MUCH FUN! 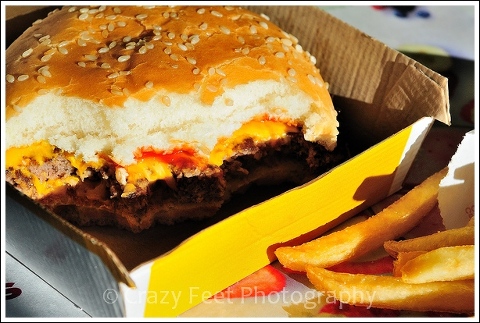 It is completely impossible for me to eat at McDonald’s without my mind wandering back all those years to thoughts of surreptitious glances & secret winks.  Sigh.  Just even catching a glimpse of those golden arches & my heart still skips a beat.

If we were ever to see each other again I imagine it being rather like that scene in The Notebook.  Yeah, THAT scene.  Except without the torrential rain maybe.  Or maybe with.

I expect he is still listening to John Martyn, cooking great food & stoking log fires.  I expect that wherever he is, he is ridiculously happy.  And if he isn’t, I expect that he is making the absolute best of it.  He always was a glass-all-the-way-full type of guy.

As for me, I am still listening to Phil Collins, making great {SANE} desserts & taking photographs.  I still love Quarter Pounders with Cheese. I still love McDonald’s fries & Apple Pies.  And their Chocolate Milkshakes – although I can’t remember the last time that I had any one of those 3 things.  I do still remember the hottest thing that ever came out of any McDonald’s restaurant anywhere on earth though.  Sigh.

When people talk about emotional eating, it’s no joke.  It’s as real as the nose on my face – which, incidentally – I wish were smaller.  The foods that we eat can be inextricably linked to good or bad memories, emotions and feelings, and everyone knows that emotions can be strong enough to turn the tide; or at least make us do **really** crazy things.  Like eat disastrously inSANE food even though we know – for sure – that they are bad for our health.  If you don’t believe me, please explain why I only ever cross the thresholds of three fast food restaurants – McDonald’s, KFC, and Jack In The Box – the 3 places that I have intense emotional connections with.  I don’t eat fast food anywhere else.  Because it’s not the food that is the draw – it’s the good emotions that I associate with these places.

Understanding this has given me the willpower to keep driving right on by those golden arches when my brain is screaming for some comfort.  And understanding this has also allowed me to give myself permission to take care of my emotions every once in a while.  So don’t ignore the reality of emotional eating.  Embrace it.  Use it to your advantage.  Recognise it.  Understand it.  Manage it.  And then get right on back to your fabulous *SANE lifestyle, without beating yourself up over it.

McDonald’s: I’m lovin’ it. Or rather, my emotions are.

PS. I’d have taken better pictures for you, but I haven’t been in a really long time.