Shawn & I met in England almost 20 years ago.  He has been {really} bad at keeping in touch.  (Hi Shawn!  Love you!)  I have been a lot better, but even so, we’ve probably only seen each other 7 or so times in those almost 20 years.  Still, it’s one of those friendships that defies time itself:  every time we see each other it seems as though we just saw each other the previous week.  Don’t ya just love friendships like that?

A wife & 4 deliciously adorable children have joined Shawn in the years since we met.  I love spending time with them all; it just doesn’t happen that often.  It’s always {very} special when it does.  November 2009 had me stuck at Phoenix airport for a 4-hour layover on a flight to Fort Lauderdale, Florida.  What better way to spend it than to have lunch with my favorite family of 6?  That was the day that I met Shawn’s youngest son for the first time.  He cried when they dropped me back at Sky Harbor & I promised him it wouldn’t be another 5 years before I saw them again.  So when I planned my 2010 Christmas getaway to Tucson & Flagstaff I realized I would be driving right past their door.  PERFECT.

I arrived in Mesa {pretty} late & {very} tired after 34 hours of driving in a 39 hour period.  Yikes.  I am sure I was also pretty stinky since the last time my body saw a shower was back in Seattle some 41 hours earlier.  Yikes.  Nevertheless, no-one seemed to care in the slightest.  Love {apparently} doesn’t care about stinky bodies.  Don’t ya just love friendships like that?

Morning rolled around & after I had *very carefully* manouvered myself off the top bunk (mercy those bunk bed ladders are skinny) I rolled into the shower.  15 minutes later Shawn & I snuck out to find a Big Breakfast Adventure, wet hair and all.  At this point, eating good food with one of my {very} favorite people was way more important to me than looking cute.  Thank heaven that deep friendships look beyond un-cute too.

Shawn already had Crackers & Co. in mind.  We drove straight to their Mountain View location & raced right in.  With drinks already underway we started to check out the menu.  Huge & ridiculous & with everything sounding good I could immediately see that we were going to need a spot of assistance from Tad our super-jolly server.  Clearly Tad is a morning person.  Or he just loves his job.  Or maybe both.  He was absolutely no help on the menu front though.  Well, that is, he was a huge help until he got started extolling the virtues of his 4th favorite.  Tad, now you’re just making this harder not easier!

This is probably a good time to mention that Shawn & I share a brain.  It doesn’t seem to matter what it is, my favorite whatever  is also Shawn’s.  This morning was no exception.  Even off of this *enormous* menu we chose the same thing.  Shawn gallantly conceded so that I would have more food to photograph, and wouldn’t you just know it – he chose my second choice.  Wild.  Synchronicity at it’s finest.  Don’t ya just love friendships like that? 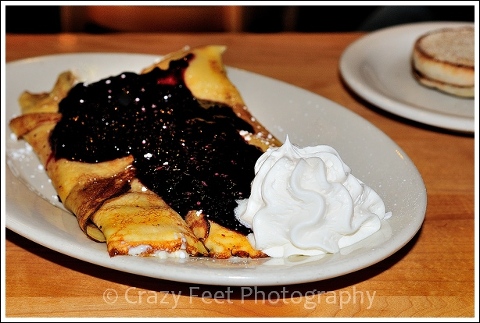 Despite being all new to my Big Breakfast Adventures Shawn didn’t even need to be asked to not eat until the snapping was over.  I tell you:  we share a brain.  The snapping did cause quite a commotion inside Cracker & Co.  Fellow diners all swivelled in their seats & servers came running to join in the fun.  Tad was hysterical, thinking that maybe this might just end up being his 15 minutes of fame.  He was such a fun complement to a couple of plates of great food. 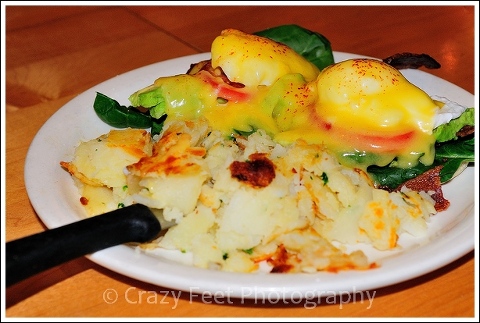 The Eggs Benny were gorgeous.  I almost didn’t want to even wait to take a snap.  Turns out they were also delicious.  Yum.  The Cracker’s Country Potatoes were also very yummy.  Made a nice change from the ubiquitous hash browns.  The Benny’s spinach was fresh & uncooked.  The avocado was fresh & firm.  The whole dish was just darn fine.  Thanks Tad!  *Great* suggestion.

Shawn & I caught up on a year of life while we were downing our respective plates of breakfast goodness.  It was just like we’d seen each other just last week.  Don’t ya just love friendships like that?

Then, out of the blue, Shawn pulled a Miss Connie on me: Cracker’s award-winning Blackberry Cinnamon Brandied Bread Pudding.  I say it was all that pesky tent card’s fault.  It just sat there on the table softly cooing at Shawn until he couldn’t stand it anymore. Dessert for breakfast. Of course.

It was good, but it didn’t wow us & I do like to be wowed, particularly when it comes to dessert.  But despite the lack of bread-pudding-wow it didn’t spoil our breakfast-catch-up in the slightest.

Crackers & Co. is a great place.  I think I can speak for both of us when I say that Shawn & I thoroughly recommend it.  We do share a brain after all.

0 comments
« A Frosty Resolution
Where have you been all my life? »