Well today’s little foray into the foodie breakfast wonders of downtown Seattle comes to you from Boka, restaurant to Hotel 1000.  It was absolutely pouring rain.  The great thing about pouring rain first thing on a Saturday morning is that no one goes out in it so parking was a breeze, right outside Boka’s door.  The bad thing about parking right outside the door is the new parking meter tariffs.  Heavens to Betsy.  When did THAT all happen?  $8?  EIGHT BUCKS??  That’ll be about the same as the price of the breakfast then.  Goodness me.

I am going to keep this short because frankly, I’m behind.  And for some reason I have been completely tired for the last 2 days.  So here we go.  Boka’s space is pretty snazzy.  Dark, trendy, plush, sophisticated.  It even has a New York style patio out front – not a good place to sit today though.  The menu is rather standard american breakfast fare with a few quirks thrown in for good measure.  You know, just to spice things up a little.  Since I was not on a true Big Breakfast Adventure and could have whatever I wanted I couldn’t make up my mind for love nor money.

Jeanne, Art Broker Extraordinaire, was with me since we’d had such a fabulous time over at Luc a few weeks back.  She brought maps of Utah again.  While we ate we planned her upcoming trip around Zion & Bryce Canyon National Parks.  I am a National Park junkie.

Jeanne gobbled up a plate of Huevos Rancheros although Daniel did warn her in advance that they were not your normal Huevos Rancheros.  Since I have never eaten Huevos Rancheros in my life I really can’t comment.  I do know that there wasn’t one tiny piece of Huevos, or anything else come to that, left on Jeanne’s plate when it went sailing back to the kitchen.  I take that as a good sign. They did forgot the potatoes though so she ended up having 2 courses: the huevos first and then a big ol’ pile of spuds.  Very nice spuds I might add.

I eventually settled on the Hot Ham and Cheese.  I am glad that they didn’t call it a Croque Monsieur because really it was quite different.  The bread was like Texas Toast but with a texture like brioche, neither of which are trademarks of a Croque Monsieur. 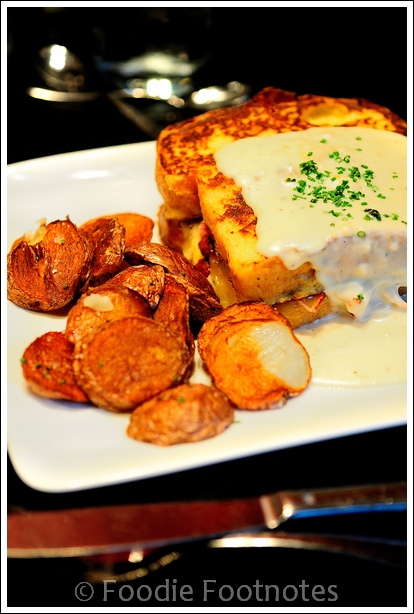 It might not seem it from the image, but the thing was huge.  Now, I can eat, but that plate was just too much for me.  And to think I’d even hung back from dinner last night in anticipation.  The first half was lovely but as I got further into it I realized that the ratio of bread to ham & cheese was all a bit lopsided.  Too much bread, not enough ham & cheese.  Consequently I started getting a bit bored I guess would be the most accurate word, which made the second half a bit of a slog.  The potatoes were good.  Better with ketchup.  Like french fries really only a different shape. 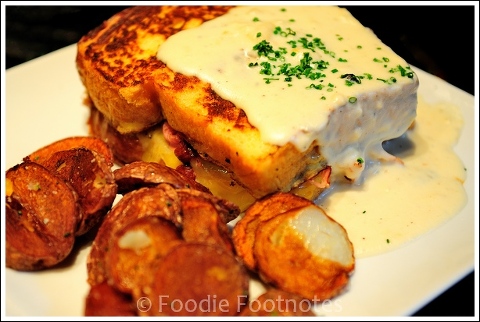 Eager to get out of town before the St. Patrick’s Day Parade descended and also on a mission to go view my art (if you’re interested you can see what is hanging in the gallery here) we scurried off to 4th & Pike replete, if a little soggy around the edges.  It was still pouring rain.

Our conclusion is that Boka is a very nice place for a business meeting or a casual meal.  Tasty food, good service, very reasonable prices, valet parking if you need it & not very far from anywhere downtown.  An altogether good egg.

Parting thought for the day: tomorrow evening at 6 pm it will be as light as it is at 5 pm today.  Oh I love British Summer Time.  Or whatever we call it here…Daylight Savings?  Yeah, that.  Love it.

0 comments
« Joyously Self-Medicated
I Poked Around A Bit »