Just Oozing Out The Sides

Today, frankly, all went a bit sideways.  Not like a landslide kind of sideways, more like the Leaning Tower of Pisa kind of sideways.  Nothing catastrophic, just a little off-center.  It all started the second that I clambered out of bed & pushed the “ON” button on my laptop.  I should, by now, know better than to do that first thing on a Friday.  I had such big plans for what I was going to get done this morning.  No breakfast food-fest today, just a nice chuck of time to get things done before heading out to lunch at Preservation Kitchen.  I have just one Big Breakfast Adventure left and that is scheduled for this weekend.  So I’ve been toying with the idea of starting a new food adventure & thought that I might see how doing lunch felt.  A random tweet from a friendly foodie reminded me that I had heard great things about Preservation Kitchen, so I determined I’d do a lunch tryout there.

Anyway, back to that wretched “ON” button.  I fired up Outlook.  3.5 hours & a bunch of day-job later, my nice chunk of time had vanished.  I also had a headache brewing nicely over my left eye.  This was not the fabulous Friday that I had envisioned.

By the time I made it up to Bothell my head was fairly thumping.  I should know better than to try and appreciate food with a mini-migraine on the loose so close to my olfactory system.  Once inside the super stylish Cafe, I asked for herbal tea with honey.  The honey took a while to show up.  I asked if they happened to have a couple of painkillers floating around.  They never showed up.  Ah well.  Maybe I can eat this headache away.

The Cafe & Restaurant at Preservation Kitchen very much remind me of The Attic at the Salish Lodge (caution: noisy link) in Snoqualmie.  Rich earth tones, craftsman style, exposed beams & a fireplace.  Muted, classy & understatedly elegant.  This place is no diner.  It is, however, a perfect place for a genteel girlie lunch. 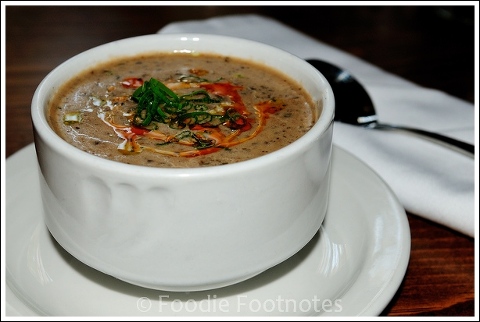 I do not believe it possible to have crammed one more mushroom into my Mushroom Rosemary Soup.  Not even a baby one.  The flavor was incredible & the texture was wonderful, which surprised me because I am normally all about silky-smooth when it comes to soups.  This one was lumpy – just chock-full of tiny pieces of tender mushroom.  Now having said all that, this wasn’t the best mushroom soup I’ve ever had – that was in Jukkasjärvi, Swedish Lapland – but this was a pretty close runner-up.  And, let’s face it – who can nip up to the Arctic Circle when they’re in need of the best mushroom soup in the world?  Bothell is rather more convenient.

I was expecting, but didn’t receive, a chuck of bread to go with the soup.  Soup without bread isn’t right.  Or is that just a me thing?  Honestly, I didn’t need the bread, I just felt like something was missing.

Next up was the Smoked Duck Sandwich.  Now that’s what I call a fine Friday lunch.  How decadent! 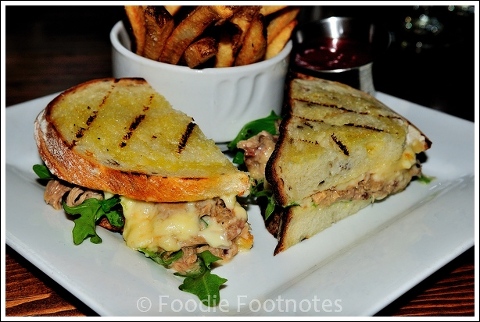 It was a terribly beautiful sandwich.  All that Smoked Duck & Valley Girl cheese was just oozing out the sides.  But as I worked my way through the first half I realized that I was having sandwich issues.  It was a very drippy sandwich & from the taste of it, the main perpetrator of the drippiness was olive oil.  It was just an oily sandwich.  Not greasy, oily.  I couldn’t tell if it was the homemade garlic mayonnaise that was just not quite right or if it was the olive oil tossed liberally on the outside of the bread.  Either way, it had an over-riding flavor of olive oil which spoiled it for me.  I am not a big olive fan, but even if I was, I wanted to taste the duck, not the oil. 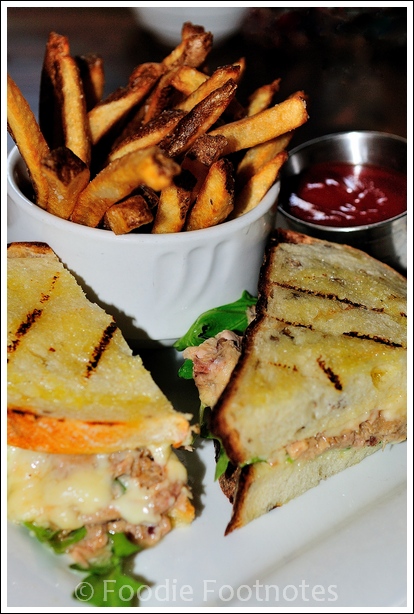 The fries were also a bit of a problem.  Overcooked and a tad soggy.

The dessert menu looked wildly enticing & there were several things that I would have quite happily tried out, but my heart wasn’t in it, my head was thumping and I just decided to stop while I was {somewhat} ahead.

Lunching alone, it turns out, is different than breakfasting alone.  I am sure it still beats the pants off dining alone though.  There’s something about eating dinner out alone that doesn’t seem quite right.  But maybe that’s just because I haven’t done it very much.

I think that my trip to Preservation Kitchen just happened on the wrong day.  I am going to go back when my food senses are firing on all cylinders & I don’t feel like someone just poked a hot poker in my left eye.  Reading the reviews, looking at the menus, seeing the ambiance & decor…I am certain that PK is normally a lot more than my experience today.  Today just went a bit sideways on a lot of fronts.  Unfortunately, lunch at PK was one of the casualties.

2 comments
« The Sage Green Apron
One Tasty Hunk of Meat »