You know, I’ve decided I really don’t mind being the token girl if it means I get to go out to dinner with 4 gorgeous guys.  I’ll sacrifice.  Really.  I’ll step up to the plate on this one.  Without hesitation.  I’ll take one for the Team.  And {very} especially when the dinner venue is Bis On Main in Bellevue.

This is really going to have to be all about the food because most of our conversation will need to remain censored.  Our HR department will, no doubt, be very thankful for that.  However, it wasn’t all business talk.  Trust me when I tell you that we had an absolute blast & laughed the place down.  Repeatedly.  I get to work with the funniest Executives ever.

Those fabulous folks at Bis On Main reserved the window table for us.  Natural light = better shots.  They saw the method in my madness.  And, as it happens, it was a simply beautiful summer evening, affording me some pretty awesome light to work with.  I love it when a plan comes together.

I was absolutely determined not to have what I had last time – divine though it all was.  I enlisted Reid’s help to keep me on track.  It worked perfectly until we got to dessert.  Ah well.  Two out of three ain’t bad. 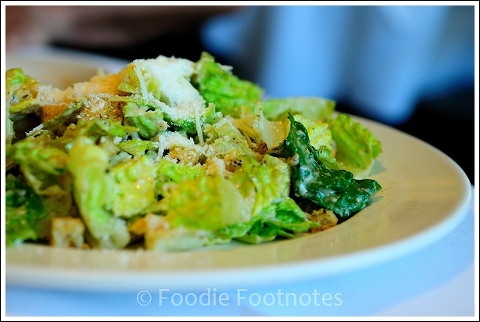 Caesar Salad: Garlic croutons and parmigiana  – $8.50.  So fresh & crisp it’s like the lettuce was still growing.  Plus, a very lovely blue shirt as a backdrop, Boss. 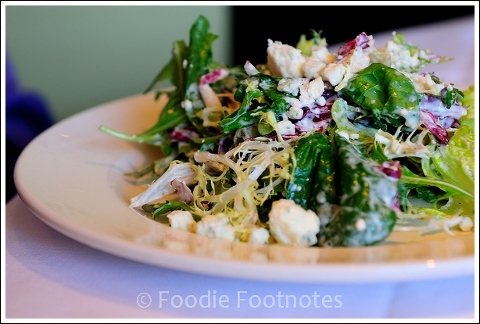 House Green Salad: Buttermilk bleu cheese – $8.00.  Growing, I tell you.  And another lovely blue shirt.  I am sensing a color theme here.  Did I miss the memo?  I was in brown. 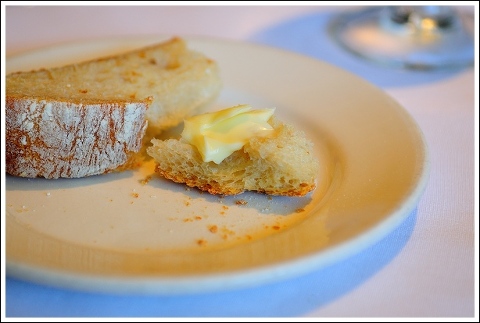 There was way too much {fantastic} bread on the table.  That stuff should come with a warning:  This product is highly addictive.  Handle with extreme caution & consume at your own risk. 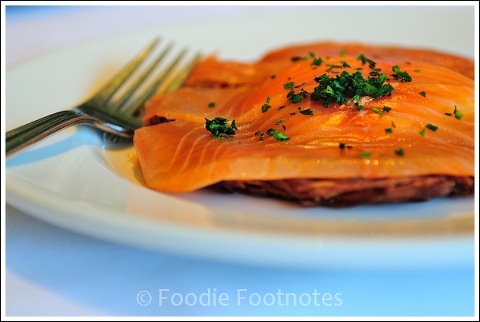 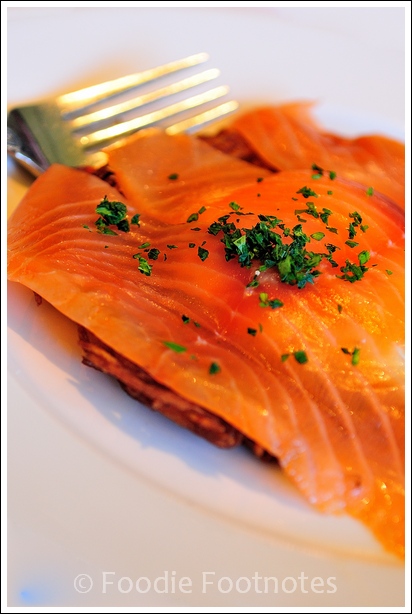 Truth be told – because that’s just the way I roll – I had issues with the Potato Pancake.  Great flavor but really crispy.  Crispy to the point where it was difficult to eat because it shattered into tiny pieces when you cut into it.  Made it all a bit clunky.  The salmon was fabulous, as was the creme fraiche.  I could have eaten them all night long. 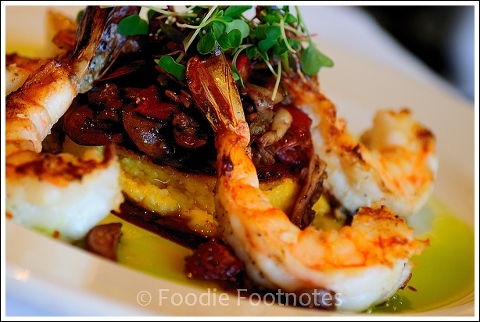 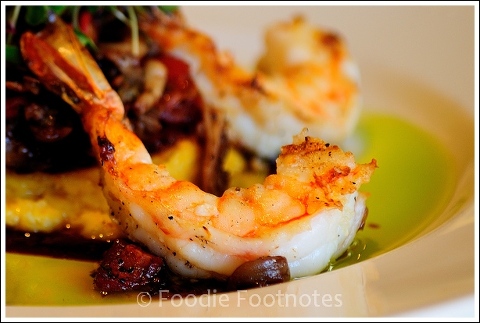 When they brought this prawn dish to the table, I gasped.  It was visually stunning.  I also wanted to eat it.  However, I don’t know The {new} Boss well enough to start eating off his plate yet, so I restrained myself.  Despite the oohing & ahhing that was emanating from it’s owner. 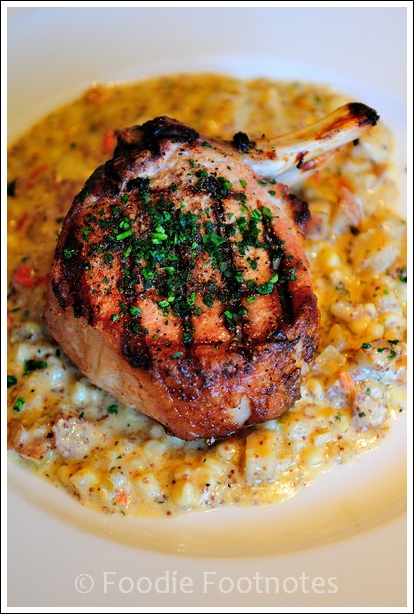 Double Cut Pork Chop: Whiskey brined with a corn, bell pepper, onion & arugula hash. Garlic mustard sauce – $28.00.  I think everyone had food envy over Scott’s double pork chops.  I only didn’t have them because Scott chose them first.  I wanted them.  My penance for lusting after them was having to sit next to them while Scott ate them.  Sigh.  I still want them. 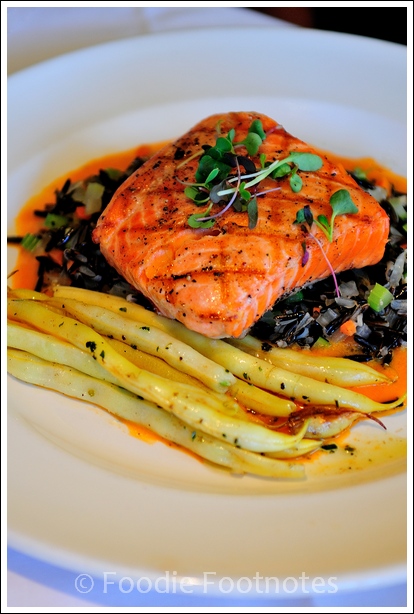 Other than being salmon, I have no clue what this dish was.  Reid always orders off the specials board & that always gets me in trouble because I am never paying enough attention.  Rats.  And now The Boss has just read that.  Ah well.  It is what it is. 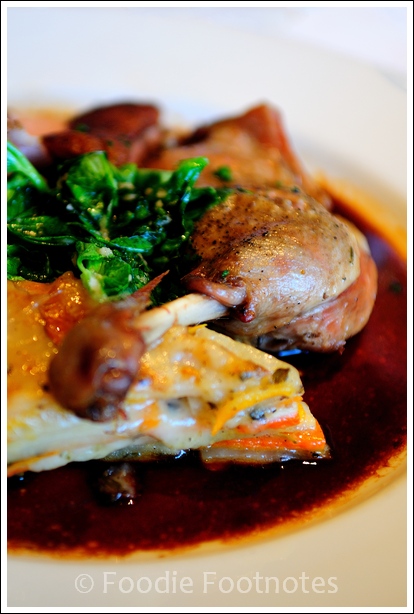 Roasted Duck Breast: Seared breast and confit leg with butternut squash gratin, pea vines & a pomegranate demi – $30.00.  Oh, the duck.  I ate this duck the last time I came here.  I still have dreams about it.  It was as much as I could do not to have it again this time.  Self-discipline prevailed.  I still had food envy watching Marc eat it.  Sigh. 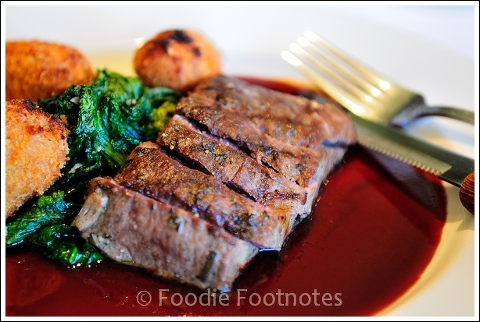 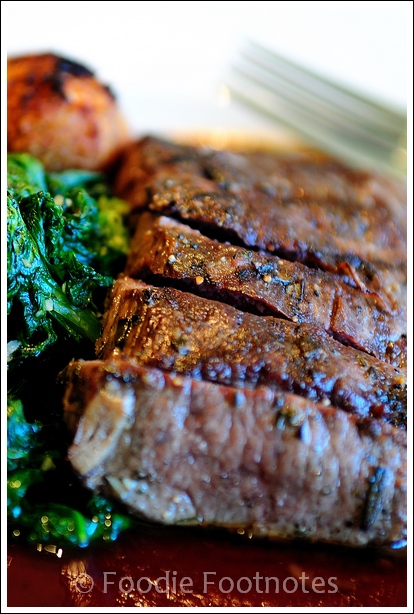 Truth be told – because that’s just the way I roll – I had issues with this whole dish.  One of us was clearly having an off-night – either me or the chef – or possibly both – although everyone else was perfectly content with their meals.  Who knows.  I do know that had I had my eyes shut I would have said I was eating beef, since the lamb just wasn’t very lamby.  Given that my brother grows lambs (and then we eat them), I do feel like I have a very solid idea of what a good lamb tastes like.  A Somerset English lamb, anyway.  Maybe Colorado lambs, by default, have a different flavor.  Who knows.  It was tender & juicy enough, & there sure was a lot of it…it just didn’t have the right flavor, for me. 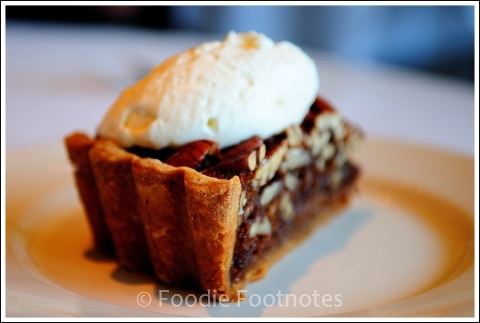 Pecan Pie: Tony’s secret recipe served with fresh whipped cream – $7.75.  I just knew that Reid would not be able to leave the table without a piece of Tony’s Pecan Pie.  However, he did share with Marc & The Boss in an attempt to assuage the guilt.  As usual, it was one enormous piece of pie.  Between them they polished it off in short order.  Marc had issues with the pie, but that was nothing to do with the pie and all about Marc being European.  We just don’t do pecans in Europe & Pecan Pie is all a bit strange to us.  Pecan Pie just doesn’t blow our skirts up.  Sure made Reid & The Boss smile though.  And that’s all that matters. 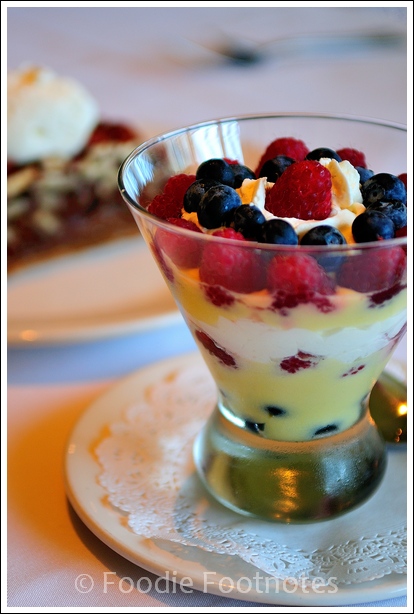 This is where my plan to not have the same dish twice, failed.  I just had to have the Berries Zabaglione: Egg white & Madeira zabaglione with fresh berries – $9.50 again.  I think it was even better this time, although it didn’t make my legs wobble quite as much.  Probably a good thing, given that this was our first dinner with The Boss.

I could rave on about the service, the sassy waiter (although not as sassy as previously…likely due to the whole 4 guys thing), the ambiance, the food, the whole darn fandangle.  But really, you’ve read it all before.  There’s nothing new to see here, folks.  Bis On Main is fabulous.  And that’s my last word on the matter.  For now.