Therapy At Its Finest

If I am ever going to catch up on posting my food adventures, I can see I’m gonna have to stop eating for a while.  Or just post images with no words.   The weather isn’t helping the situation.  When it’s a glorious sunny day in Seattle, no one wants to be indoors hammering away at a keyboard.  And there just aren’t enough hours in the day, when the sun isn’t shining, to sleep AND get all these foodie ramblings written.  If you’ve ever been to Seattle you’ll know that in the summer there ain’t many hours between sunset & sunrise.  We love it that way, but it doesn’t give us much time in the dark.

Yesterday I was under UPS-mandated house arrest while waiting for the Man In Brown to deliver my new passport.  The weather was beautiful & I was pretty bummed that I was forced to stay home.  The upside is that it also forced me to focus on getting stuff done on the home front.  There’s always an upside.  You just have to look for it.

One of the things that I did was make a ridiculous amount of ice cream.  So therapeutic.  Love making ice cream.  However, that didn’t get the blog updated, it just created more content.  Sigh.

Today, no longer under house-arrest, I was up with the lark and tearing off down the freeway for a Big Breakfast Adventure.  A new cafe in a new neighborhood.  That is, not “new” as such, just new to me.  Destination: Eastlake.  That little bit of land between the I5 & Lake Union.  Louisa’s was shut when I arrived for what I thought was opening time.  Darn it all.  They open later on the weekends & I somehow missed that important nugget of knowledge.  Ah, well.  Off to explore Eastlake then, on a perfect summer day, just after sunrise. 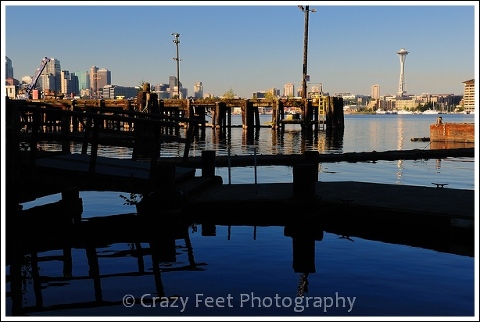 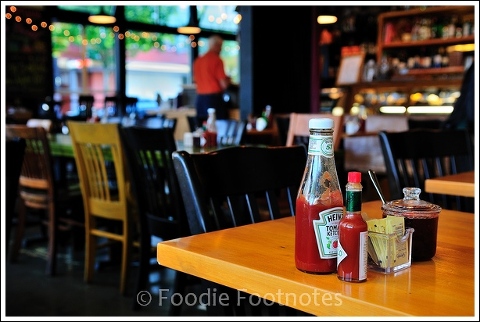 When I got back to Louisa’s there was a line.  Clearly a popular place, but a large number of out-takers, so the tables didn’t fill up as quickly as I feared they would. 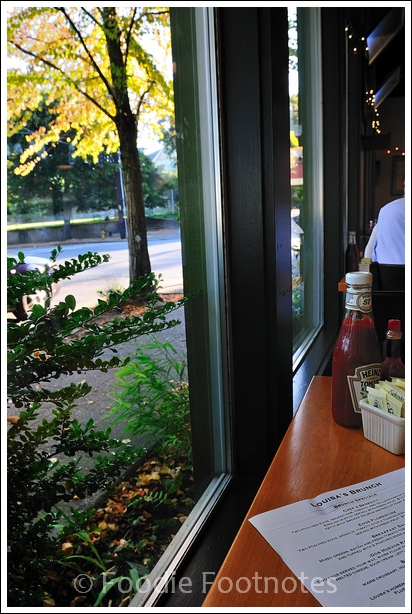 A large space with charming mis-matched wooden chairs, a long bench down one wall & a cute counter overlooking the street.  When I plonked myself on the bench in the corner I noticed that there were 2 servers.  One was round & jolly, while the other gal was skinny & scary.  As I watched them to and fro across the fast-filling cafe, I wondered if their body-types were in any way connected with their personalities.  This is one of the very few possible downsides of eating alone.  Your mind can wander to places it is probably best not to go.  Louisa’s is a great place to people watch. 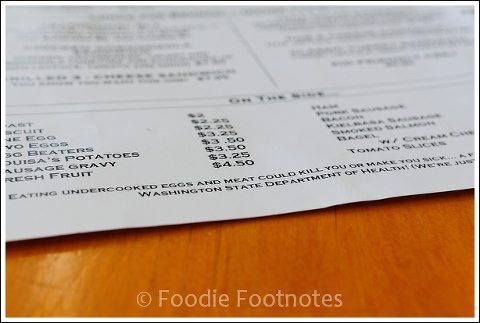 I’d never seen the egg-and-meat warning written quite like this before.  I always love a spot of humor.  The whole menu was sprinkled with little chuckles. 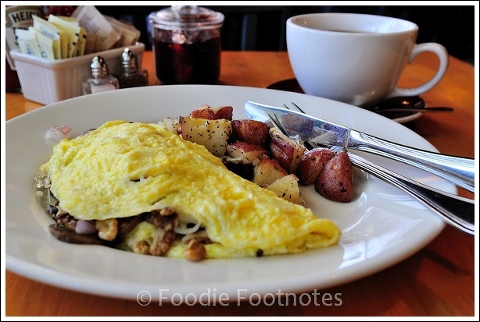 Encouraged by my super-jolly server, I went for the most popular omelette on the menu.  Despite the fact that it had walnuts in it.  Yes, walnuts.  In an omelette.  Who in the world came up with that idea?  Don’t get me wrong.  I like walnuts.  Walnuts definitely have their own special place in this world.  Just not in omelettes.  Walnuts belong in cake, mostly.  Oh what the heck!  I’m going in…wish me luck! 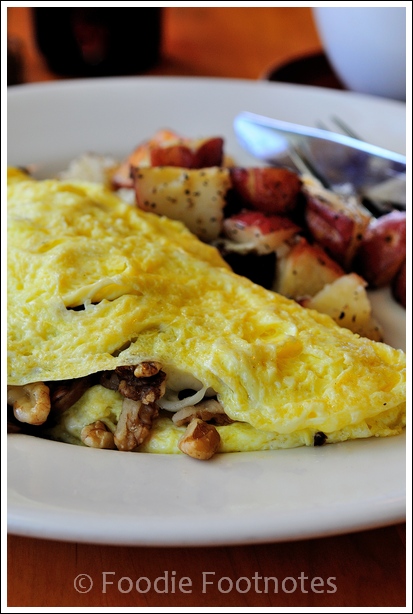 Walnuts should stay in cake.  Walnuts {really} do not belong in omelettes.  Looking past the walnuts though, this was a very fine omelette.  One of the most well turned out omelettes I’ve had.  The potatoes were a little over-seasoned for my tastes, but I am certain that most spicy-loving Americans would be rather partial to them. 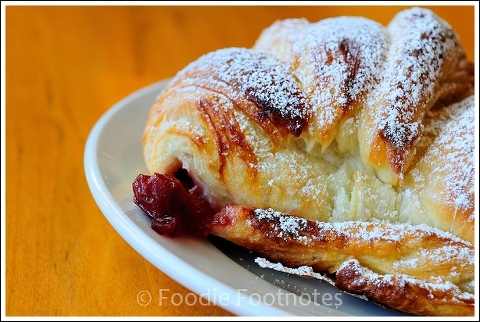 It was time to go play in the pastry case.  It was filled to the brim with bejewelled pastries, pies & croissants of all types, courted by an ever-changing stream of people who, having chosen the pastry(ies) of their desires, would rush out into the sunshine clutching their coffee & their pastry treasures wrapped up in little paper bags.  Many a merry soul was to be seen sauntering down Eastlake Avenue sipping a latte & munching on one of Louisa’s infamous baked goods. 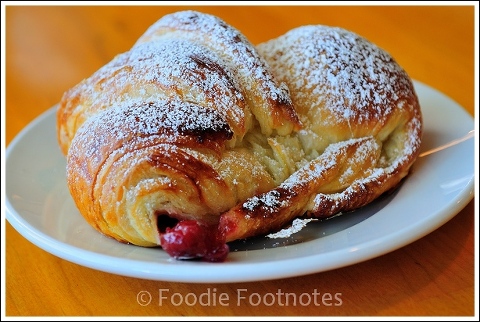 1. Because I love cherries & 2. Because I have never had a Cherry Croissant before.

The flavor of the croissant was fabulous.  Butter, butter, butter.  Sadly, the texture was all wrong.  It looked like it should & I was so hoping that when I bit into it, it would shatter into a glorious little pile of crispy, buttery, flaky, golden shards of deliciousness.  Alas, it was the texture of a very light cake inside.  Oh and not enough cherry.  If you’re going to put cherry in, put plenty of cherry in.

I was perfectly content snuggled in the corner of Louisa’s watching Eastlakers come & go.  I wasn’t really ready to leave, but the place was filling up & I had already been there longer than anyone else.  So off I toddled, into the sunshine.

As I was driving down the street, it happened.  Out of the corner of my eye I saw Grand Central Bakery.  Well.  It’s right there.  It would be *daft* not to just swing in and get something, now wouldn’t it? 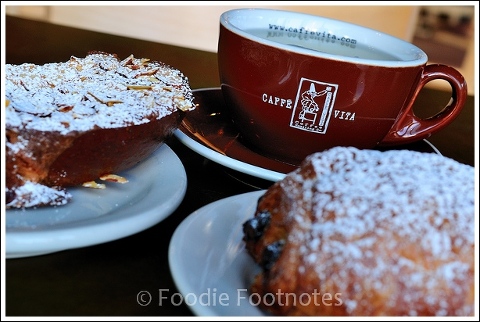 Given my emotionally charged week at the office, I was all in for a good old fashioned carb-fest & I’d heard that there aren’t many places as good for that as Grand Central Bakery. 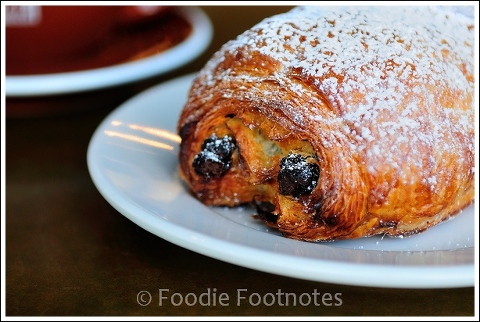 The Pain au Chocolat looked like it should & by jove it turned out to be the best darn chocolate croissant I’d had in a while.  I made quite a mess with it.  Yay! 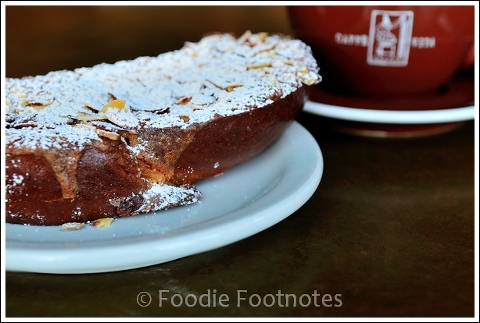 But it was the Twice-Baked Chollah that totally floated my boat.  I would drive to Eastlake or Pioneer Square from Snoqualmie & back just to get another slice of that stuff. 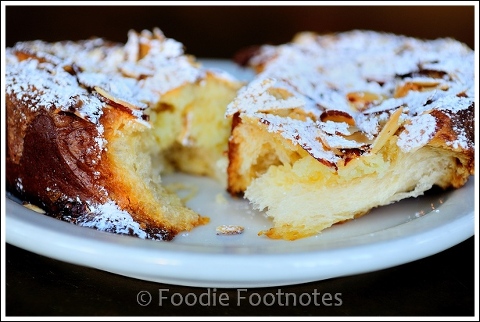 The bottom had been soaked in an almond syrup before before being baked the second time, giving it an intensely almondy, slightly crispy base.  Along with the soft, airy crumb & the caramelized crust, all covered with roasted almonds & powdered sugar, this made a pastry I won’t forget in a hurry.  Swinging by Grand Central Bakery on a whim turned out to be a {terribly} good idea. 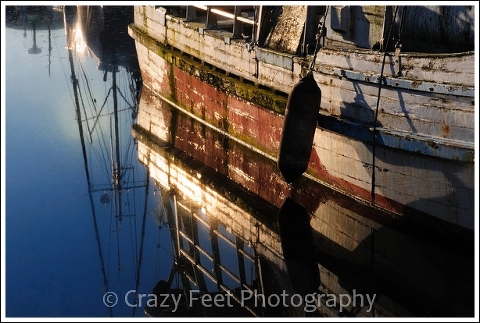 I swung my legs as I sat by the edge of the water, and I cried.  I don’t do that very often at all, but when I do, I do it good.  It was a very emotional week at work.  Fisherman’s Terminal was a good place to get it all out.  Especially after downing a large stack of pastries.  Twice-Baked Chollah & a couple of hours by the water did wonders.  Therapy at it’s finest.