I went on a Sunday.  It was the Sunday of the Superbowl, and because after 11 years I still don’t remember from one year to the next what sport is played at the Superbowl, I had no plans to watch it.  Aside from not having a TV anyway.  So I went to the spa.

It was blissful.  Cocooned in an over-sized, white, fluffy bathrobe, I drank mint tea in The Sanctuary while lolling on the over-sized, overstuffed chaise.  Soothing and peaceful.  Dim lighting, soft music and the gentle sound of water trickling.  It’s amazing how, when you are able to get in a place where the world isn’t, the stress just starts to drain away.  Then came a massage like I’ve never had before.  There was {almost} no skin left untouched.  Even my ears got a rub down.  I was like a puppet with all it’s strings cut after 90 minutes of that.  Then the facial.  Oh, mercy be.  I don’t even know what that glorious white-coated woman did to me.  I do know it involved a myriad of different lotions & potions, all of which had a dizzying effect on my nostrils.  I do know it was quite odd having warm, tingly seaweed goo spread all over my back & then lying on foil while it did its thing.  Especially when I was supposed to be having a facial.  Anyway, whatever the seaweed’s thing was, it felt lovely.  I do know I fell asleep at least once.  And I do know that my face felt like that of a 4-year-old when it was all over.  Oh, and that I did not want to leave Penterra.  Ever.

In a bid to prolong my state of complete relaxation for a long as possible, I laid in the steam room for 32 minutes & watched the steam whirl & the water drip, drip, drip.  It was so warm.  So calming.  So refreshing.  Like this.  And then, because I was still dangerously slippery from all that oil & lotion, I stood in a way too hot shower for way too long.  It was way too wonderful.  I felt like a new woman afterward.  Truly, I did.  I want to feel that way more often, so despite the fact that resolution-making came & went nearly 2 months ago, I have now made a resolution to rustle myself up some spa time at least every once-in-a-while.

I drifted out of the spa & into Trellis.  Because a girl needs to eat great food after being emotionally & mentally revived. 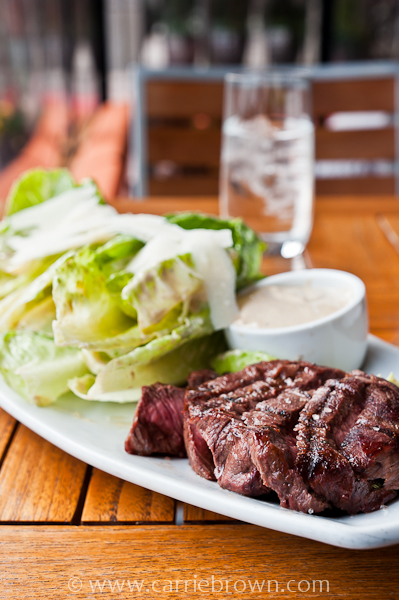 If we’re talking great food, Trellis has it in spades.  This is my most eaten meal of 2012.  I’ve eaten it at least 5 times since January 8th.  Grilled Flat Iron Steak (medium rare) & Caesar Salad – hold the croutons.  Simple.  Astoundingly good.  Lettuce so fresh it barely had time to realize it was no longer in the field before being laid on the plate.  That’s almost as fresh as I was feeling after my 3 hour rendezvous with some serious pampering & a long, hot shower.  Almost.  Shavings of creamy, tangy Parmesan.  Swathes of fresh steak, introduced to the grill for but a few moments before being sliced & served.  Awesomeness on a plate. 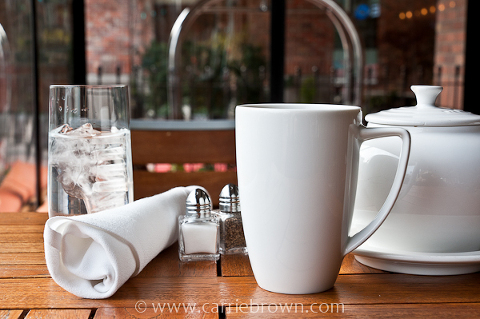 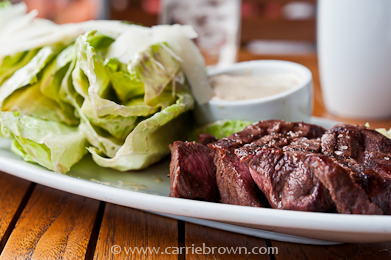 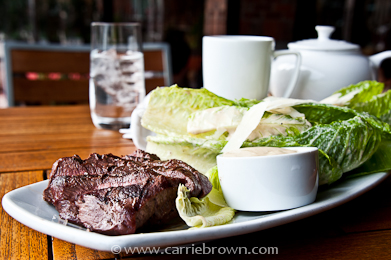 For friends like Belinda, I am so very grateful.  For all the people who share my life, even if they are taken away *far* too soon, you make my world a better place to be.  I thank you.  I hope I can be to those around me as my friends are to me.

While I am on the subjects of lovely people & Trellis, those lovely people at Trellis invited me over for their Brewmaster’s Dinner with Hopworks Urban Brewery.  I had to ask if they were really sure that they wanted me taking up a seat at their table, because I don’t drink beer & I didn’t want to deny another soul their Beer Dinner Dream by taking up space but not partaking of the hop juice.  They assured me they had a spot picked out just for me, and heaven knows I don’t need any more provocation than that.

The weather was ghastly.  The kind of weather that makes me seriously consider the need to add an aqua-lung & a pair of flippers to the emergency kit I carry in my car.  Wipers on full-speed, aquaplaning while going uphill (how is that even possible?) and enough spray to make me think it would be easier to drive in a thick fog.  Dinner, however, was another kettle of fish entirely.   A beer-tasting dinner on a dreary Friday evening?  Yes, please.  Even though I don’t drink beer. 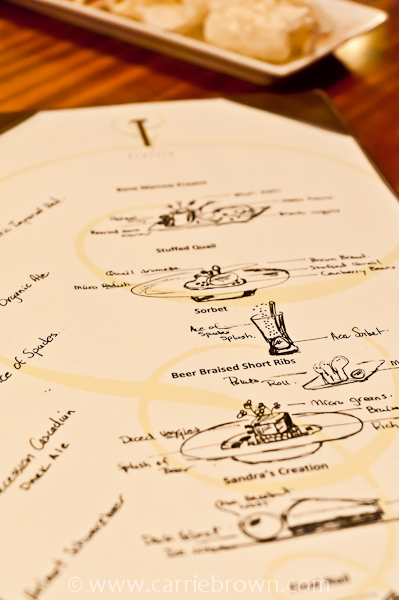 The menu was hand-doodled by Chef Brian.  Shouldn’t all menus look like this?  I’m thinking yes. 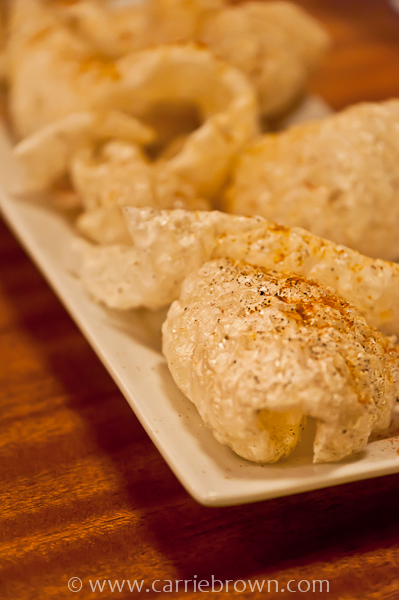 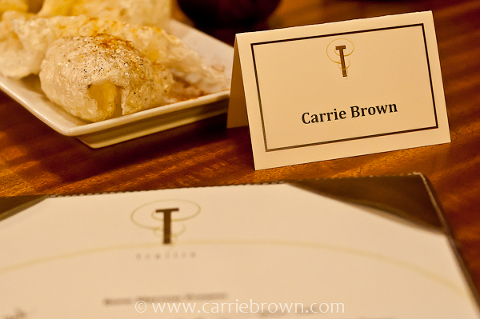 Trellis just never do anything by halves. 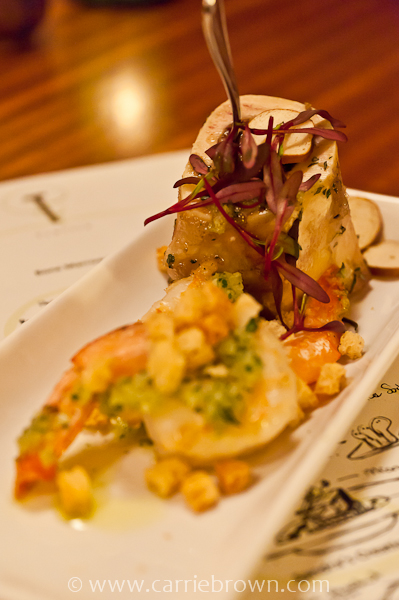 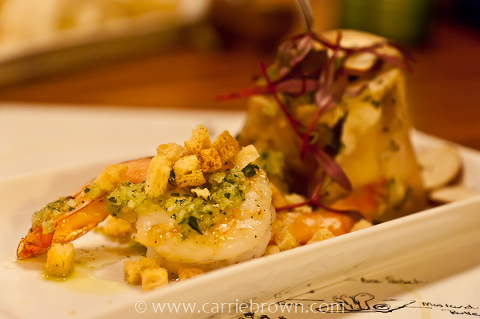 There’s been a trend in Bone Marrow recently.  Trellis blaze a trail with their version by adding succulent prawns, micro beet greens & a tasty sauce. 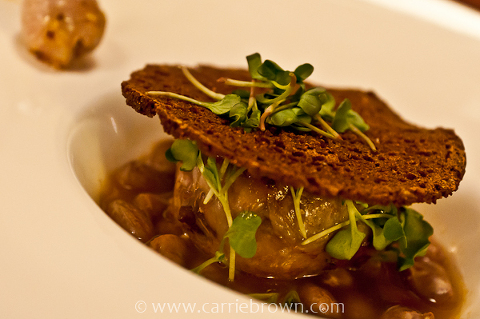 The brown bread slice on top of this stuffed quail was incredible.  Apart from being so original and masterfully created, it had an intense malt flavor that that just knocked my socks off.  When I quizzed Chef Brian about it afterwards he said it took a few attempts to get it how they wanted it.  I am still not sure how he got that much flavor into such a small & delicate piece of food.  The flavor about made me want to take up beer drinking.  I hope these will be getting a spot on Trellis’ menu.  They would make fantastic appetizers with the right dip. 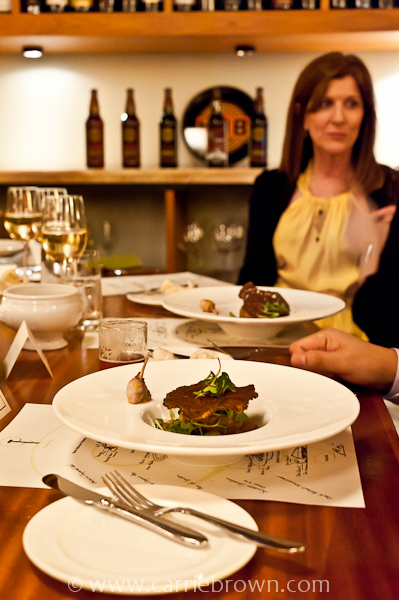 The small piece of meat on the side of these dishes is a quail drumstick.  How cute is that? 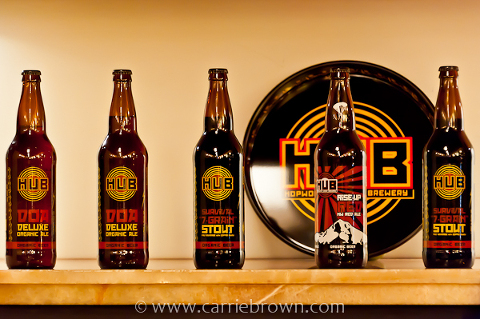 Hopworks Urban Brewery supplied all the beer for drinking & cooking.  An organic, sustainable brewery in Portland, Oregon these folks are down-to-earth, passionate about beer & downright fun.  While I don’t drink beer, I did grow up in the middle of the hop-growing countryside in Kent, England.  Surrounded by oast houses, hop growing was a major industry where I lived.  These days, with hops being dried industrially, people have converted these old, typically round drying kilns into quaint & unique dwellings.  They still dot the landscape all over Kent. 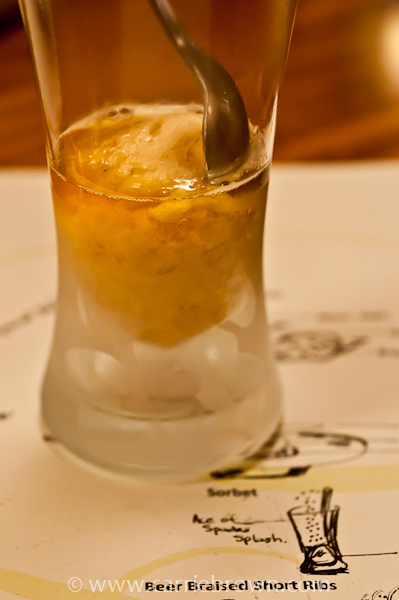 This was the maddest sorbet I have ever tasted.  My eyebrows almost shot off the top of my head with the first spoonful.  Made with Ace of Spades Beer, it had quite a kick to it.  Palate cleanser?  Holy smokes, yes. 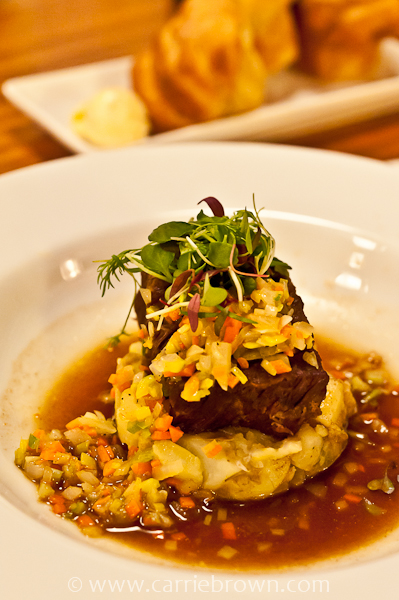 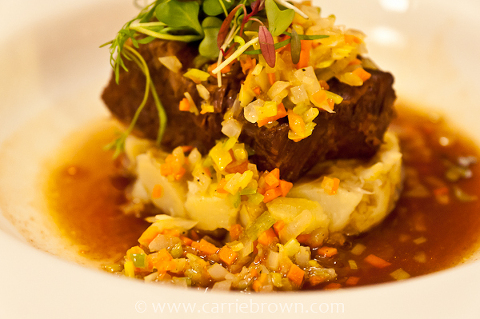 I might not be a beer drinker, but I am not disappointed that Chef Brian decided to braise his short ribs in it.  Fall-apart tender & with a spectacular depth of flavor, these ribs came on a bed of Fingerling Potatoes that had been languishing in Chef’s root cellar for several months.  There is no way these babies came from Safeway.  Carefully raised on Chef’s farm 6 miles away, it’s been a while since I ate spuds with this much flavor. 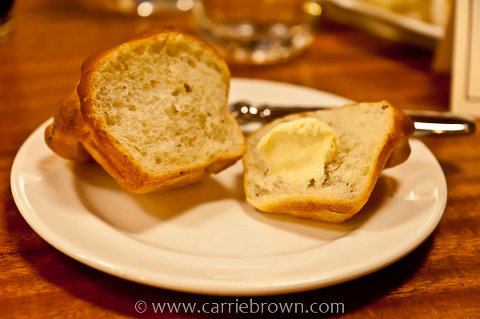 If you’ve never eaten butter at Trellis, I thoroughly recommend it.  Tonights was Mustard Butter.  Magical.  Not quite as magical as my Trellis favorite Sweet Pepper Butter, but Trellis’ flavored butters make all other butter seem just so, well, ordinary.  Also, those Potato Rolls need to come with a warning.  Luckily, they only put out a few, otherwise I could happily have eaten enough carbs to last me the entire week. 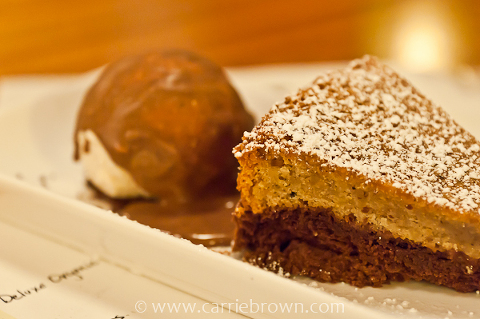 It’s no secret that I am picky about desserts.  I think Sandra Watson is one of the best Pastry Chefs in Seattle.  Thus, I was a little disappointed with her Hazelnut & Flour-less Chocolate Layer Cake.  The Beer Ice Cream that came with it, adorned with Sandra’s incredible hazelnut sauce, saved the day.  The cake was a tad dry, but eating it with a spot of ice cream & sauce turned it into a hazelnut lover’s dream; but you really needed that ice cream, which was particularly smooth & creamy.  Unlike the sorbet, it did not make my legs wobble or make me wonder if I’d have to stay at the Heathman for the night because I was no longer able to walk in a straight line, let alone drive. 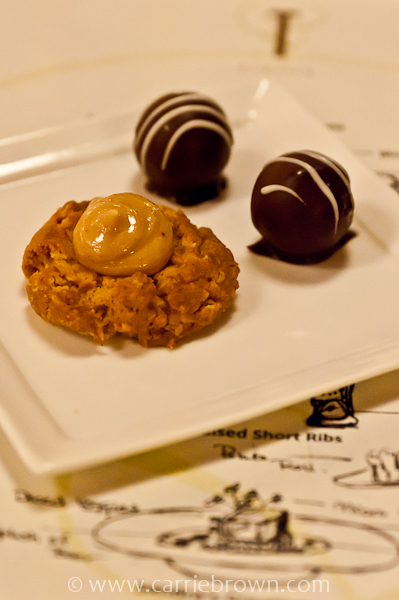 There should be a law against these Peanut Cookies.  Sandra must be commiting, at the very least, a misdemeanor in order to get as many peanuts in these things as she does.  One bite of Sandra’s cookie is like eating an entire pound & a half of freshly roasted nuts.

As is usual with Trellis events, nobody wanted to leave.  So we all sat about discussing ice cream, root cellars, cats, shooting stuff, & beer-making.  Plus Mexican food, the virtues of the Oregon coast, & the bedding at the Heathman Hotel.  Everyone was very happy.  It was just an all-round splendid evening.

Thanks to my friends at Trellis, my new friends at the table & the H.U.B Crew for a *very* memorable beer-laden night.