We Talked About Bacon

Until a couple of minutes ago I was languishing sleepily on the day-bed in my office, Dougal curled up in the curve of my belly & Penelope folded into the space behind my knees, as I slumbered in an S-curve.  The slumber was courtesy of the Cyclobenzaprine they gave me at the hospital yesterday.  Last night when I took the first dose & snuggled down on the big, fat, brown couch, blanket & cats pulled close & a movie popped into the DVD player, waiting for the promised soporific effect, nothing happened.  I was as wide awake 3 hours later as I’d been all day.  So today, I took them with brunch.  By 12 noon when I rolled into the garage, home from the beautiful country drive after breakfast with Belinda, I could barely prop my peepers open.  Three and a half hours later I awoke from a sleep so deep I spent the first few minutes wondering where, and maybe even who, I was.  It was a lovely nap, but I’d had other plans for my Saturday afternoon that didn’t involve unconsciousness & a heavy, red-wine-colored blanket.  Dougal and Penelope, however, are still insisting that it was the Best. Afternoon. Ever.

I woke up this morning to the pitter-patter of rain on the window and I could see the grey swirling around from where I lay.  I had been hoping for a clear day so I could hop out of bed and go shooting in the countryside on my way to meet Belinda for brunch.  ‘Twas not to be.  When I got to Duvall at 8:58 it was still drizzling, still grey.  I came with a large bunch of daffodils that I had spotted at the store yesterday.  Because Belinda deserved daffodils to brighten her kitchen and remind her that despite Mother Nature’s dreary outfit today, Spring really is just around the corner.

The Grange Cafe was as warm & welcoming as I remember.  It’s a rare place that can pull off such a cozy decor while still being sharp & classy.  I’d booked a table this time, also remembering the line from last time’s visit. 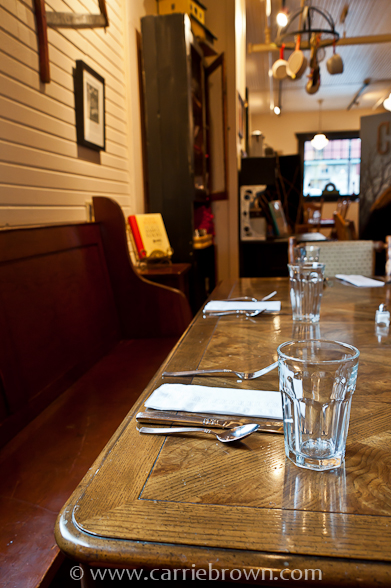 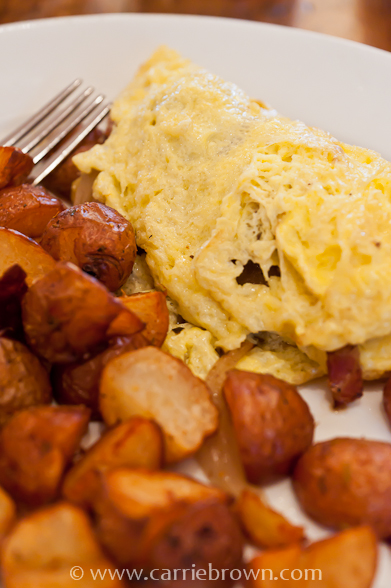 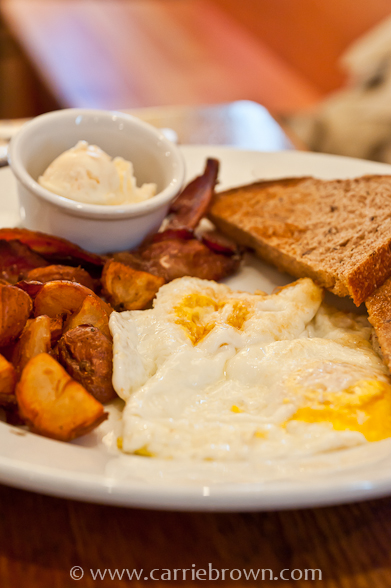 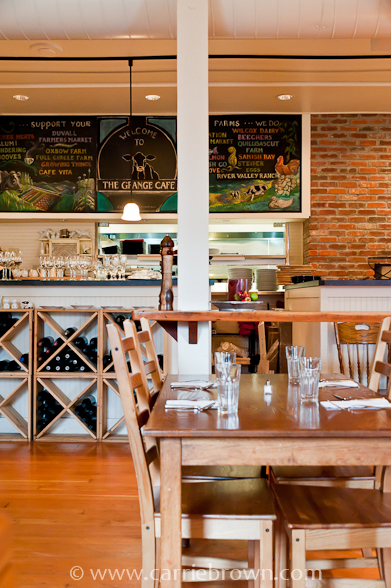 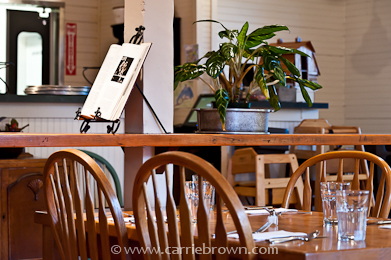 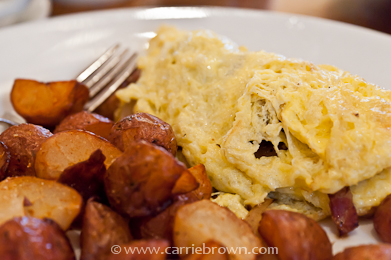 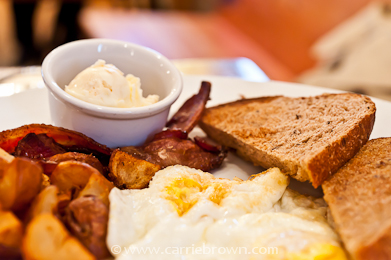 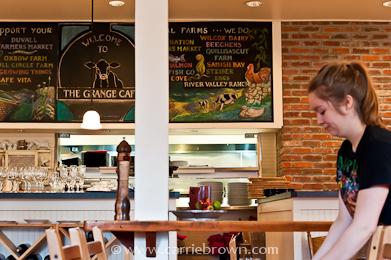 The bacon doesn’t come from Safeway.  Neither do those potatoes, and you can tell that in the very first bite.  Their mission declares, “Our menu features many of the region’s best ingredients hand-delivered by local farms, cheese and dairy from local artisans, and the highest quality meat and game available.”  I didn’t have to believe them, I could taste it.  The bacon in my omelette had a depth & richness of flavor that was as alluring as the smell wafting out from the kitchen.  Are there any smells more delicious than that of sizzling bacon?  So we talked about bacon & I shared my new find of the week – Trader Joe’s Uncured Bacon Ends & Pieces, and how I had thrown together a Leek & Bacon Casserole with said bacon and how ridiculously good it was.  I am still rather impressed that I cooked myself dinner.  The fact that it was such an outstanding success was a huge bonus.  I should probably jot the recipe down for you, huh.

The staff at The Grange Cafe are delightful.  Plus funny.  At first , our gal Tracy told me I couldn’t have French Toast because I hadn’t eaten all my potatoes.  When I pointed out that she wasn’t my mother she confessed that she often gets frustrated with parents who force feed their children at the table when they are clearly full.  I wasn’t full, but I did want French Toast and eating more potatoes meant eating less French Toast.  The potatoes, incidentally, had a seasoning on them which served only to augment the flavor of the potatoes themselves.  It wasn’t peppery or salty or spicy, nor attributable to any one herb; but it made the potatoes shine.

When the French Toast came we were both a little aghast at the enormous pile.  I dug in; Belinda steadfastly refusing even a taste. 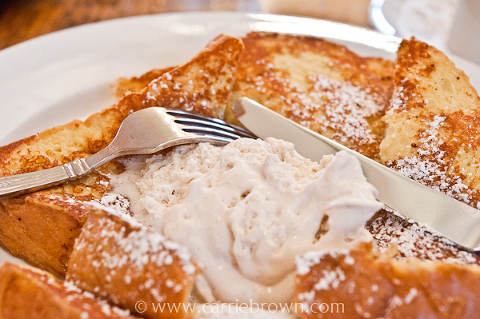 This wasn’t the best French Toast I have ever eaten.  That title is still held by Geraldine’s Counter.  It didn’t have that crusty, crispy coat & fluffy soft middle that Geraldine somehow manages to coax her bread into having.  The Challah French Toast came with Seasonal Fruit & Cinnamon Cream ($10).  The cream wasn’t cinnamon-y enough to tell it was cinnamon without assistance; and there was nowhere near enough fruit.  I finally found tiny chunks of apple hiding in the middle under that deluge of cream.  When I found them though, they were lovely. 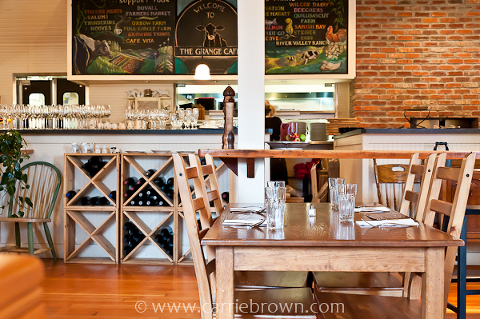 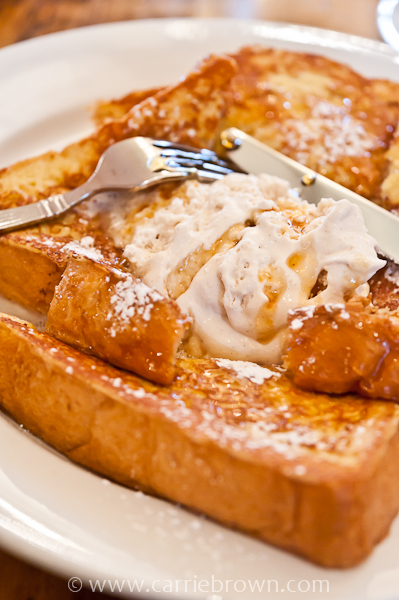 We sat by the window and talked for 2-and-a-half hours.  Horses, dogs, cats & yard parties with tractors.  Food, work, ice cream & kidneys (not the kind I am in favor of eating).  New York, hospitals, weight-loss & how 10 minutes of intense exercise done right can make you almost toss your cookies & not be able to type for an hour or so afterwards.  More food, photographs, driving & how we really do like being single.

We loved our time at The Grange Cafe today.  I am excited for summer when we can loll on the deck in the warm breeze at dusk.

Belinda was heading off to spend some time with her mother & I was heading back home to write.  And maybe cook for the second day in a row.  Wonders will never cease. 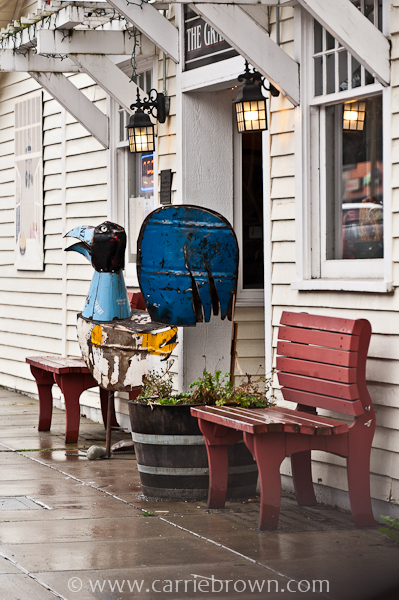 All this chicken talk has made me a little peckish, so I’m off to find some chocolate.  I’ll need some extra energy to run round and turn all the clocks forward an hour tonight.