When The Magic Happens

I adore driving coast roads.  There’s something about the ocean that heals me.  Soothes me.  Inspires me.  After the rocky road that was my 2011, I needed some healing, soothing & inspiration. 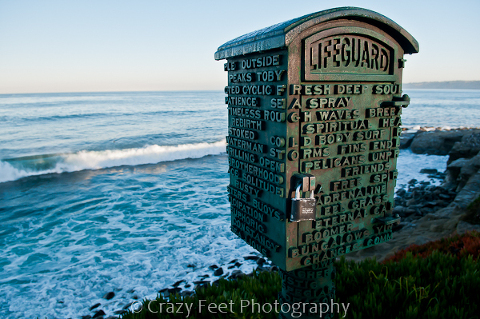 If I can’t get to the coast, I listen to this song and close my eyes.  I can almost feel the gentle ocean breeze on my face.  But when I get to stay near the ocean, I love to get up really early & head to the shore.  Magic happens as that golden orb pokes it’s head above the horizon. 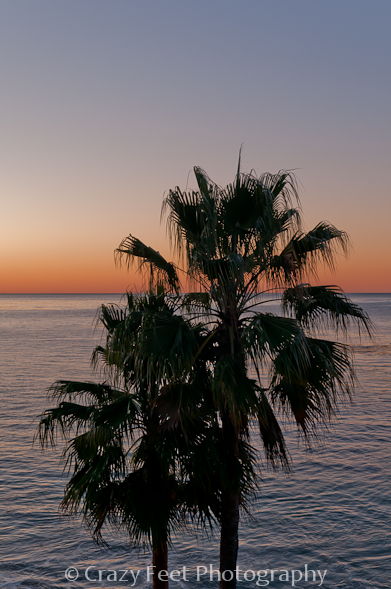 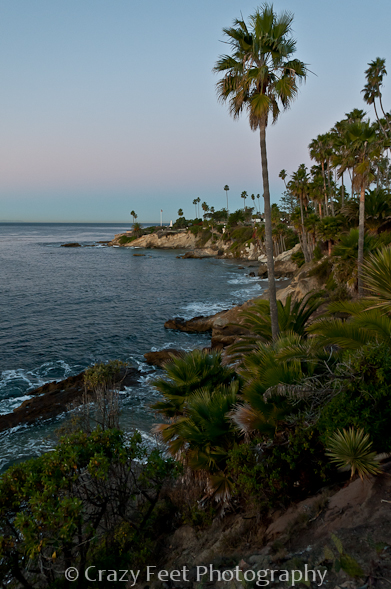 Even in December, San Diego offers miles & miles of coastal heaven to sit and gaze out from.  My only company was a little chill in the air.  Serene silence.  A barely-there breath of fresh air coming off the glassy blue water.  The hushed whisper of the surf gently breaking on the soft, cold sand.  Pastel colors reaching across the clear, star-studded sky.  I can think of no better way to start a morning.  I can carry that tranquility with me all day.

One day I meandered up the coast road to Laguna Beach before sun-up.  When the person who has had the most positive influence in my life suggests that I go somewhere specific, I need no more encouragement.  It was beautiful. 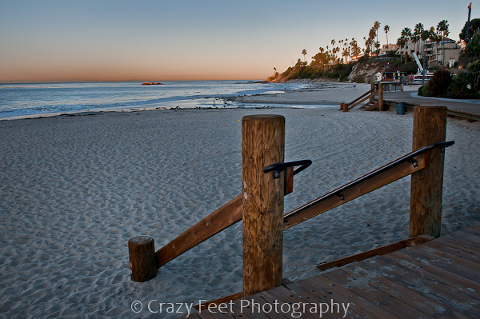 Once the surfers & joggers & dog-walkers joined me, I headed north to see what other treasures I could find.  I didn’t even need to find anything.  It was enough just to drift up the coast, soaking in the beauty, inhaling the fresh air.  Everything else would be a bonus.

I just wasn’t expecting a bonus in the guise of an Orangesicle Shake.  Nor the spectacular-ness that is Newport Beach.  The view, people, the view. 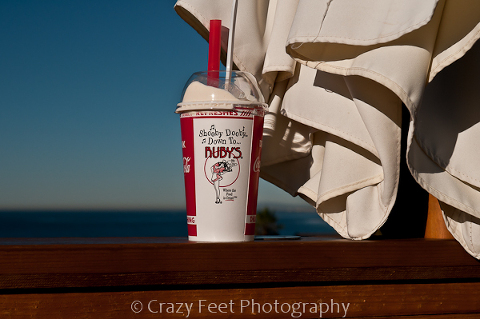 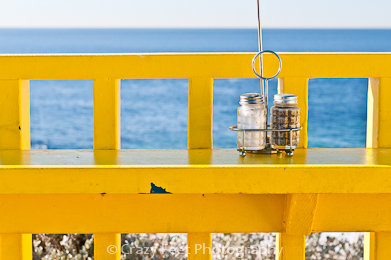 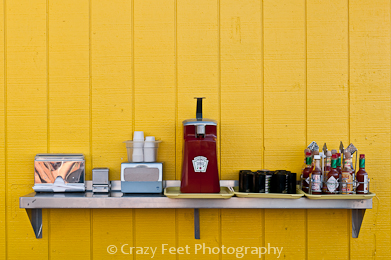 The Shake Shack at Crystal Cove.  This has got to be the best seat on earth to eat a shake at. 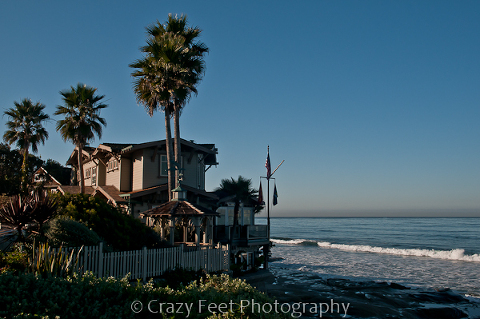 Another day, after I watched the magic happen, I remembered that I still had to head over to Solana Beach to check out the best crepes in San Diego.  If you don’t trust yourself with a credit card, NEVER go to Cedros Avenue in Solana Beach.  Don’t even drive down it.  You could melt that card in about 17 minutes. You have been warned. 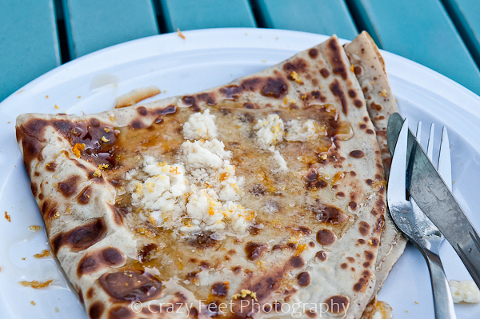 The Orange Blossom Cafe is a fascinating place, tucked away in a little cul-de-sac off Cedros Avenue.  Its owner, Anna Gomez, has a story just as fascinating & I left there wanting to go back every day just to support her little business.  Their infamous savory crepes are made with a house-developed recipe using beer batter, the sweet crepes with cinnamon, vanilla, and a hint of orange zest.  The flavor combinations are a testimony to her creativeness & imagination.

Anna’s coffee is also famous for the same reasons.  No, not for being made with beer batter, but for their creative blends and flavors.  Made me wish I actually drank the stuff.  Peanut Butter Mocha?  Yes, please!  Instead, my friend’s sister had let me know that they make a fabulous Mexican Hot Chocolate, so I supped on that instead.  It was really good.  The crepe was great, although it was  little thick, giving it a slightly stodgy, heavy texture. 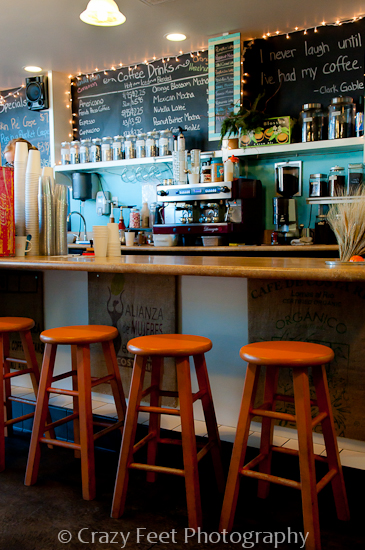 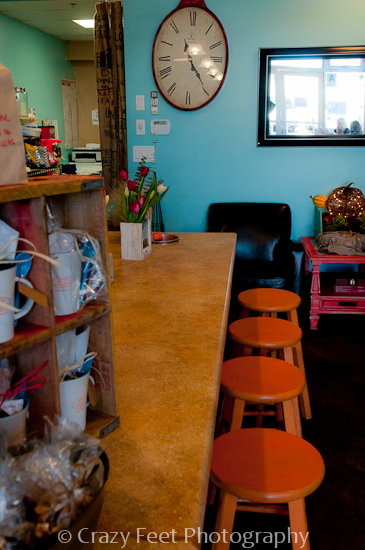 Not able to down 2 crepes in one sitting, I headed of down to the beach for a while, before returning at lunchtime to sample a savory crepe.  The place was still packed.  Seems business folks & housewives alike both love to hang there, and frankly, I don’t blame them.  Being able to sit outside on their little patio only made everything {even} better. 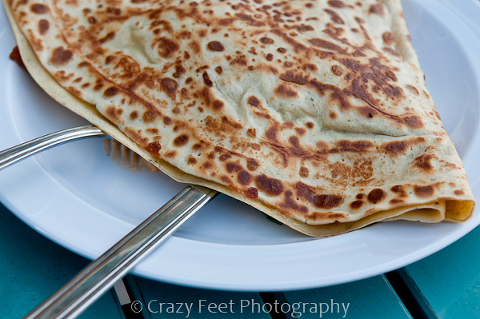 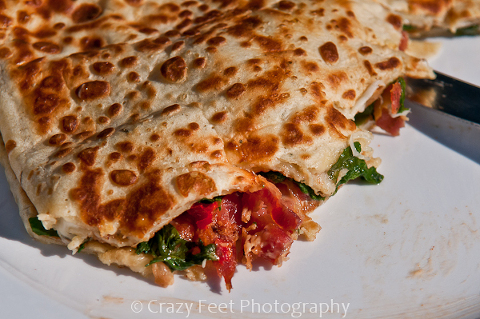 My only beef with the crepes is nothing to do with the crepes themselves or the fillings or the love with which they were made.  My beef is with the presentation.  There was none.  I would say the same about my hot chocolate.  And you know…I really think they would have tasted {even} better had they been presented with the same style & flair as their recipes were created with.

Anna could take a leaf out of Anita’s book, or La Cote’s, for some ideas.  Then Anna’s crepes would be spectacular.  Even the hot chocolate would have tasted better had it resembled any of these.  And been served in a cup or mug, rather than paper, especially since I was eating there.  Notwithstanding that they weren’t the prettiest crepes around, I will be sure to swing by Orange Blossom Cafe whenever I am near Solana Beach.  A terrific find – thank you, friend’s sister! 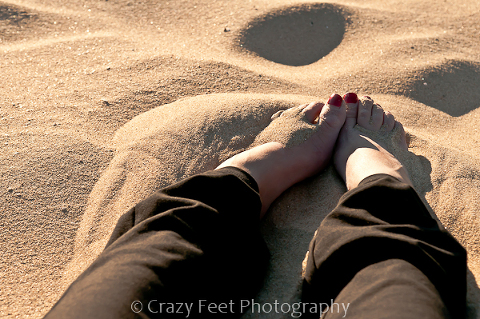 I love being up when the magic happens.  I love to watch the color slowly creep into the sky.  I love being out in the cool air to be a part of it.