A Bit of a Commotion

The cats are all in a bit of a commotion.  I vacuumed.  Tore through the upstairs of the house like a woman possessed.  What with my Friday Night Dinners, Big Breakfast Adventures, and road-trips, plus a travel project I am working on that involves a whole bunch of stuffed toy animals, vacuuming hasn’t made it very high up the list of {vitally important} things to do lately.  But today…well today I was faced with several thinking projects that I just could not inveigle my brain into thinking about.

So I vacuumed.  That was, after I’d purged the 2012 paperwork pile, which had been growing for almost 6 months and had recently taken up residence in a particularly large heap by the side of my desk in order to encourage me to do something with it.  That is to say, it started as a pile.  The ‘kids’ thought it was a simply splendid place to play.  I am sure that you can imagine what it may have looked like after several weeks of having various kitties thrusting themselves on it & through it.

Once I’d thrown away a rather large amount of the paper from the {now} dishevelled pile & made 4 much smaller, much neater piles from what remained, I was really on a roll with the whole *purging* deal.  So I moved into my closet.  Hello, Goodwill.

Inspired and recharged I did two loads of laundry, washed the dishes and then threw myself upon the vacuum cleaner as though it were my last meal.  It is amazing what one can find the time & energy to do when there’s something you really don’t want to do.  I swear I burned at least 473 calories pushing that purple monster around.  I was going at quite a clip.  And I am now glowing like a neon ‘open’ sign.

The kids have skedaddled all over the joint from the sheer terror of it all.  One lying as flat as a pancake under the bed and one hiding behind the TV hoping that the world has not, in fact, ended.  One squished into the {empty} trash can, one wedged behind the tumble dryer in the laundry room & one, dear Florence, fast asleep on the footstool.  She’ll wake up later and ask what we’ve been up to all afternoon.  She’s a funny one, our Florence.

Daisy just poked her head around the office door to determine if it was safe yet.  I came in here to see if my brain was in the mood for some thinking yet.  Nope.  Maybe some chocolate will help?  Nope.  Then maybe it’s just time to change the bed linens.

In other news, the clematis that sits right outside my kitchen window is smothered in beautiful purple-pink blooms.  What with that and this whole purging thing, it’s clearly Spring around here, even though the pesky weather can’t decide which season to throw at us next. 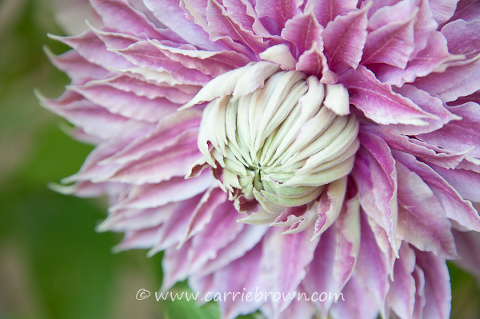