We took up & overflowed 2 huge booths at Blue C Sushi in Lynnwood.  It is a magical place if you’ve never been before.  I hadn’t.  It was magical.  A little train track runs around the middle of the whole place with little “railroad cars” of sushi dishes circumnavigating non-stop.  You simply grab a dish as it passes by & eat it.  When you’re done eating the server comes round and counts up all your empty dishes & you pay.  Very fun!   I have to say that for a virgin sushi consumer the menu was a complete mystery & add to that the little railroad cars & the whole pay at the end deal & I was sure glad that I had a whole pile of friends around to show me how to get fed;  otherwise I think I would have either been very hungry, very broke, very embarrassed or any combination of the three. 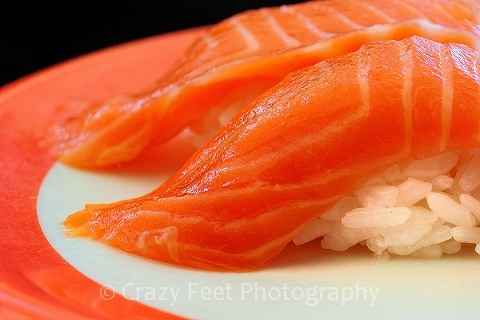 There were a bevy of busy Asians skilfully chopping, slicing & wrapping in the middle of the “train track”.  It was fascinating to watch them turning huge slabs of raw fish into beautiful, dainty little morsels of yumminess before loading them into the their little railroad cars & sending them merrily off on their way to circle the restaurant until they were grabbed by eager sushi-lovers.  Goodness in motion. 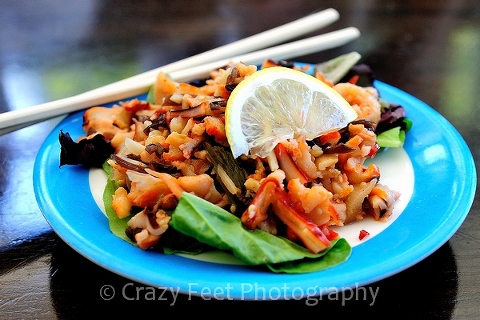 Having decided (at least a little) what you want to eat you then have to wait for the train to bring your chosen sushi round to your table, be paying attention when it gets to you & grab one before it all chugs past.  I wasn’t paying attention a lot.  I was sat right next to the train track & was so occupied grabbing dishes for my table mates & then photographing their food that I think I missed my cream cheese sushi at least a couple of times.  Not that I cared, we were having so much fun.

We were sharing food & laughing & talking up a storm as well as watching Mis Mic open her plethora of cards & gifts.  Blue C Sushi is a fantastic place to do all of that.

The railroad cars of sushi just kept coming & coming.  Miss Mic ordered some food from the server as well – including calamari & later on some strawberry & vanilla mochi ice cream.

Gimpy had this strange drink called a Sake Bomber (or something like that) which is a Sake cup with Sake in it sitting in the bottom of a beer glass.  Then you pour a bottle of beer into the beer glass with the Sake cup inside.  All very strange, but hey you learn something new every day.  I didn’t ask to try it.  I have a feeling he wasn’t sharing anyway.  He wanted every last drop, & who can blame him?  It was Friday after all & the end of a long work week. 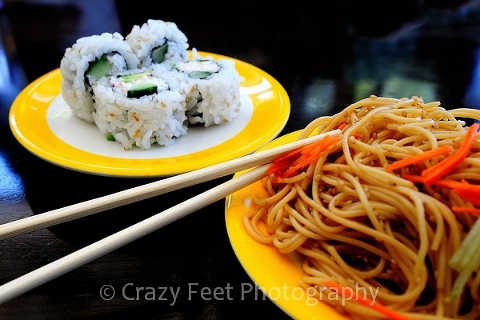 I had my sushi with cream cheese…it also had avocado & salmon rolled up with it.  Yum!  I tried octopus for the first time.  Yum!  I had California Rolls.  Yum!  I tried the noodles, they had a bit of a kick to them.  I tried the calamari, they had a bit of a not-quite-sure-what to them.  The food was good, the place was fun, the company was grand & Grandma Helen picked up the tab for our booth – THANK YOU Grandma Helen!  What a wonderful way to celebrate a BIG day.

Now, for those of you who follow along, you’ve probably noticed that there’s no people in my images.  Not that I don’t like people…I LOVE people…but photographing people is just not my forté, so I tend not to do it very often.

However, today was a BIG day & I just had to include a shot of our STAR performer delightedly savoring her post-graduation octopus. 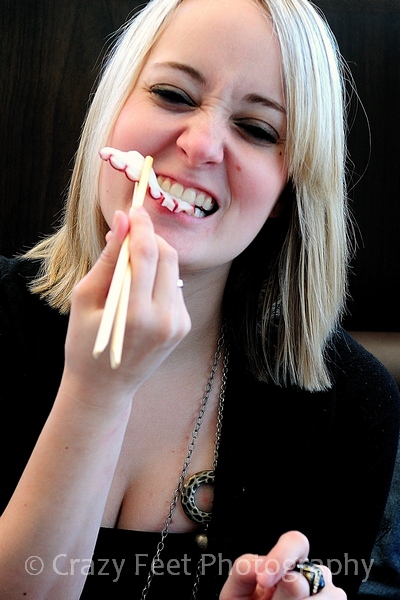