(In case you missed how the Big Breakfast Adventure got started, you can read it  here:  How it all began)

It’s Friday.  And even though it’s {only} Friday, I decided to go on an impromptu breakfast to somewhere that didn’t make the Best Breakfast in Seattle honoree list.  Just because I could.  And just because I am having SO much fun doing the Big Breakfast Adventure that I simply couldn’t wait until tomorrow :-)

Since I had to go to Trader Joe’s to gather up ice-cream-making ingredients (Summer is rumored to be arriving in the Pacific Northwest tomorrow) I decided to randomly pick somewhere nearby that served breakfast.  There were a few to choose from, though none really perked my interest from the reviews.  After much hemming & hawing I figured I would just check out Panera Breads breakfast offerings – at $3.89 it wasn’t going to be wildly upsetting if I had to go somewhere else & get something else afterwards. 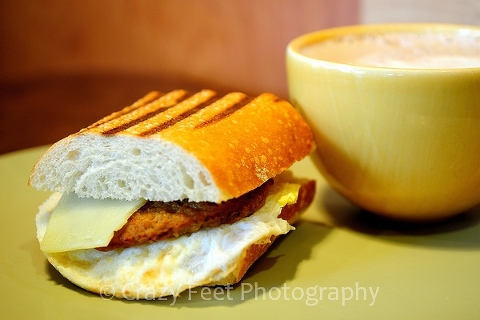 There were lots of tables to choose from so I sequestered myself into a small booth & busied myself reading my Ice Cream recipe book while I was waiting.  When they gaily announced my breakfast’s arrival into the world I eagerly trundled around to the serving area & was SHOCKED at the size of the sandwich.  It was dwarfed by the size of the serving platter & was sitting there to one side of it, alone & lost.  My stomach was already hurling insults at my brain about how hungry it was going to be after it had scoffed down this morsel.  My brain was already re-scanning it’s memory banks for the display case full of pastries that we had reviewed when we arrived.

As it turns out it was {very} tasty (yummy sausage + real egg + great bread), it was small & it was cheap.  Add a large bowl of hot chocolate & it actually made a perfectly acceptable cheap-&-cheerful, breakfast-in-a-hurry meal.  There are definitely times when this would suit my schedule & sustenance needs to a T.  Like instead of driving through McDonalds for a McMuffin.  (OK, don’t roll your eyes like that, I’ve KNOW you’ve been there).

And there are also times when if I added a pastry to the mix it would make for a cheap, fast, casual pit-stop.  Good job, Panera.