Stinky ‘pits And Other Things I Don’t Miss

I’ve started a file in my brain labeled ‘Awesome Things That Have Happened Since I Started Detoxing My Body’.  This (fingers crossed) short post comes from that file, because it’s been a while since I gave you a progress report.

As I was lying in bed at some ridiculous hour this morning not sleeping I was reminded how miraculous it is to not have stinky ‘pits after rolling around in bed all night under a sea of blankets and two overly furry Ragdolls, right after having a sauna. (Mr. McHenry on the left(ish), Daisy on the right, and yes I had to lie diagonally across the bed).  I was undoubtedly reminded of the lack of stinkiness because when you’re lying down your nose is somehow much closer to your underarms.  (This is especially true when you’re lying down and have one arm raised high in the air while you take a picture of your right hip with two fluffy cats attached to it). 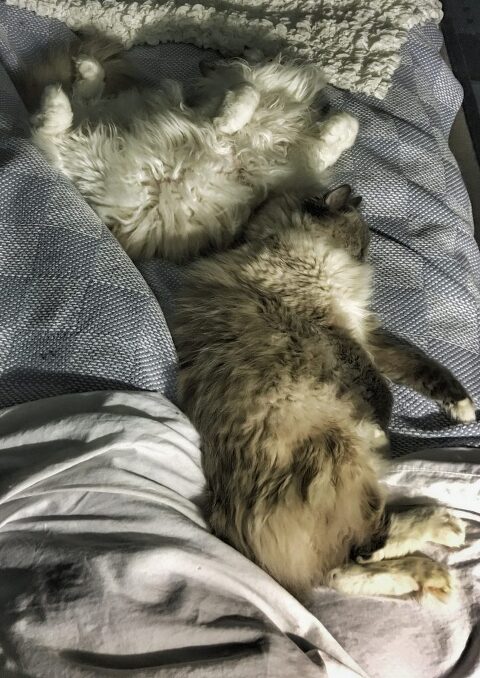 I determined that your life might well be improved if you knew that stinky ‘pits are not – in fact – just a part of life’s rich tapestry.  I’d always just gone along with the notion that you sweat, it has an odor, and if you don’t wash it off and apply antiperspirants and deodorant at least daily you’ll end up morphing into Billy Nomates. Except for your cat(s) (and I suspect dog(s) ) who will gladly still hang out with you on the basis that 1. it’s not your fault, 2. someone has to, and 3. food.  Plus, your clothes will never smell perfectly fresh again – no matter what you do. Bummer.

Well I am here to tell you lovely readers that this is all a shameful lie banded about by (I suspect) people who can make dosh from your less-than-ideal situation and your desire not to be hauled up in front of HR at work for mandatory counseling around personal hygiene.  And, I also suspect that most doctors were not told in medical school that stinky ‘pits are not normal, so they never took it upon themselves to mention that something might be out of whack if we’re a little whiffy.

Wait. What? Do I still sweat? Honey, you should see me after 30 hot and heavy minutes in the sauna! Sweat City, USA.  But NO ODOR.

I noticed around 4 months into my treatment plan that my ‘pits no longer perfumed the air, and the only reasonable conclusion to draw is that producing a somewhat unpleasant odor from one’s armpits is not the body’s modus operandi when everything is working as it should.  Now malodorous ‘pits may well be ‘normal’ in that most everyone seems to have them, but if we think of the word normal as what should be rather than what happens in most people then smelly underarms are abnormal.  And you can make it stop.

Here’s the rub: I can’t tell you exactly what was causing the smellies or what I added or took away or changed that made it stop.  I just know that after figuring out WTF was wrong with me and systematically removing things, adding things, and changing things in order to address all my physical symptoms and detox my body my production of semi-offensive underarm aroma has stopped.  So I’d just like to suggest that everything in your bod is maybe not working as tickety-boo as you thought if you are still having to use antiperspirants and deodorant every day to stop the stink.  I do not miss stinky ‘pits.

Along similar lines – I can now go at least 5 days without having to wash my hair.  And what I mean by that is 5 days after I’ve washed my crowning glory it still looks like I’ve just washed it.  Which for girls with long locks who have had to wash their hair almost every. single. day. of. their. entire life is right up there with dating Ryan Gosling, winning the lottery, or magically having a body like Elle MacPhearson while eating 38 boxes of Krispy Kremes a day and doing no exercise.

Now I don’t know what made my body stop producing the oils that made my hair dirty approximately 15 hours after I washed it, but what I do know is it no longer does that and my hair looks and feels better than it has since I was a teenager – probably due to the fact that I am not washing and using drying tools on it every day.  My hairdresser calls it, “Doll hair”.  Ridiculously soft, silky, and shiny.  Like baby hair only on a grown-up (except the days I am channeling Pebbles).  Do you have any idea how much this is saving me in time and product??!  I’d take a stab at healthy hormones being the answer, but that’s a guess.  Honestly, I don’t really care, I just know that it’s a huge change and it’s awesome.  I do not miss hair that needs washing 15 hours after I washed it.

As an aside, the products I use when hair washing time does come around are these.  They are the other reason that I have doll hair now.  I have never found products that make my hair feel or look the way these do.  When I went road-tripping to Colorado last month I slapped this hair mask on my hair and tied it up in a ballerina bun for a few days (yes, a few days – you totally couldn’t tell my hair was slathered in goop).  The result was amazing.  Hair-mask-ballerina-bun is now an every-other-weekend ritual at the Brown house (a very small amount goes a very long way even on long hair).  Even better is because I now only use hair product so infrequently these products last me for ages and end up costing very little per use.  Their hand cream is also ridiculously good and the intensive body treatment does things I never knew were possible for dry, cracked skin.

And as if those two things weren’t enough, here’s my favorite thing I don’t miss: taking Bi-polar medications.  I am still entirely unmedicated after a little over 8 months, and there has been no fallout.  No symptoms of Bi-polar. None.  And if that isn’t a freaking miracle I don’t know what is.

I will never get tired of telling you this stuff. GO, detox!

PS. Over the next few weeks I’ll be posting about various detox protocols I use because you might not know where to start and it’s a minefield out there because of all the usual money-grabbing snake-oil salesmen out there with only one goal in life – taking your $$$ regardless of whether they give you anything of value in return.