My first night in New York.  There was no way I was staying in & getting room service tonight.  I was heading straight out to see what tasty morsels I could find.  And my travel buddies & I were all hungry.  Seriously hungry.  Those pesky airlines don’t feed you anymore, even when you’re flying across the entire country.  Six hours on a plane with no food – it’s just not right.

So having left home at 5:30 am, flown 2383 miles, arrived at JFK & waited an interminable length of time for my baggage to appear (I was the only one who checked a bag, to say I was not popular is an understatement), grabbed a cab to Manhattan, sat in traffic, checked in & taken my gear upstairs it was 6:30 pm & we were all ravenous.  My body wanted salad, my mouth wanted lamb chops & creamed spinach.  I’ll give you one guess which body part won out.  Well, I mean, come on.  Was I really going to fly all the way to New York for a salad?  OK, yes, I am getting heavily into self-justification at this point.  It’s just, well…once I looked at the menu at Bobby Van’s & saw Lamb Chops & Creamed Spinach I knew I’d lost the battle before it had even begun. 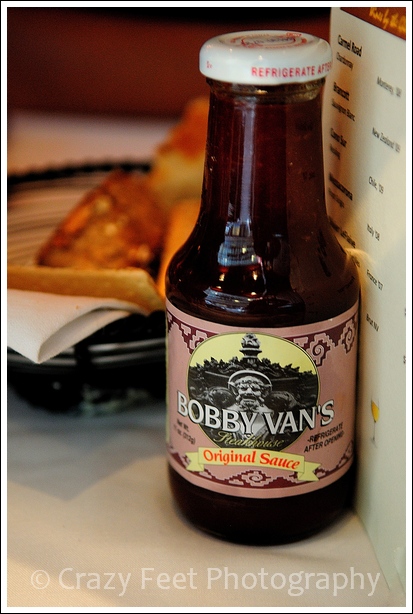 The first thing I noticed when we walked into Bobby Van’s was that everyone was very smartly dressed & there were a surprising number of men sporting ties.  People…it’s 101 degrees outside.  Did you take leave of your senses?  Clearly Manhattan has a bunch more snappy dressers than Seattle.  I would have liked that except that we were still dressed Seattle-style & I felt a tad under-dressed.  No one seemed to care though, although for a millisecond I wondered if the sharply attired & particularly handsome Maître D’ was going to allow us to remain in his dining room.

I chose to sit out the first course, wanting as much room in my stomach as possible for all the marvellous meat & veggies that would be heading there shortly.  My fellow diners all ate lettuce for an appetizer.  I still haven’t quite got my head around the concept of cutting an iceberg lettuce in quarters, dribbling some dressing over the top & calling it salad. 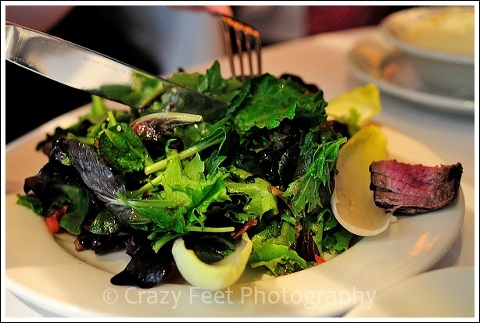 For entrees, Mark stuck to his plan & ate salad, with sides of broccoli & mashed potatoes.  There was part of me that was a bit envious, especially my stomach as we rolled back to the hotel later.  We supplied Mark with some protein by all donating pieces of lamb, halibut & steak to his plate.  We thought it a very worthy cause.

Eric went with halibut.  I have no recollection of how it was cooked or what was with it, although it was very moist & beautifully cooked.  It was also a huge piece of fish, much larger than it might seem from this image.  It’s not the best image:  I was tired, hungry, there was no light & I didn’t have my flash with me.  Excuses, excuses.  A bad workman always blames his tools.  Sigh. 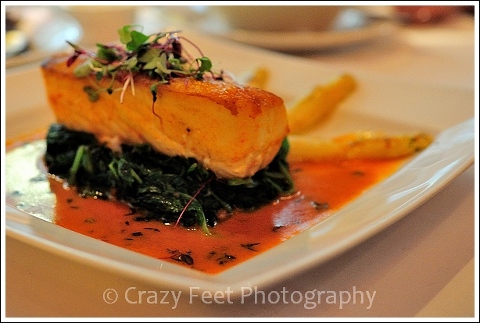 Forrest wanted steak.  When it arrived he decorated it with onion rings to make a face & used watercress for hair.  I think he was a little delirious having been up for so long with no food.  Who knows.  Or maybe he had become delusional after spending the majority of the day at 37,000 feet above the earth with a seeing eye dog lying beneath his feet all the way & it’s owner filling both her seat & half of Forrest’s.  Yeah, that can’t have been a bundle of laughs for 6 hours.  Forrest’s steak however, was delicious.  Not as good though, I have to say, as Daniel’s Broiler.  Sorry Bobby, Dan has you beat on Filet Mignon.

And me, well I never did get past the Lamb Chops & Creamed Spinach. 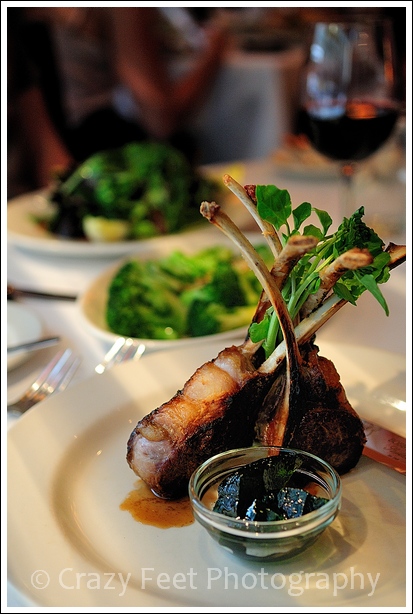 You know how steak houses tend to just give you a plate with a slab of meat on it & everything else you order separately as sides?  Not so at Bobby Van’s.  Well, they do…but they make it *look* like a plate of food when they bring it to you, even though it really is just meat on a plate.  Bobby’s Lamb Chop presentation was just lovely & I felt like I had a whole meal placed before me.  Getting the intricately entwined chops apart to eat them was another matter entirely.  It was worth the struggle. 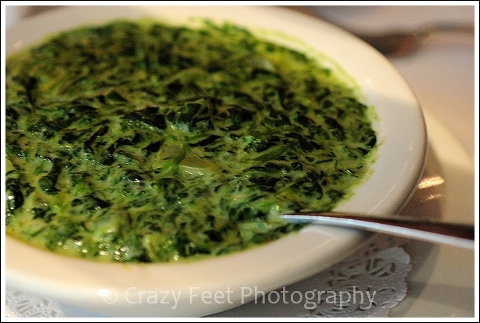 And Bobby, I am sorry but Dan wins out again with the creamed spinach.  Yours is tasty & I ate the entire 2 person serving on my own.  However, I am a bit of a creamed spinach aficionado & I found yours a little thin.  A little body-less, a tad unsubstantial.  But the lamb chops were perfectly delicious (once I’d figured out how to get them apart so I could eat them).  The mushrooms were simply divine. 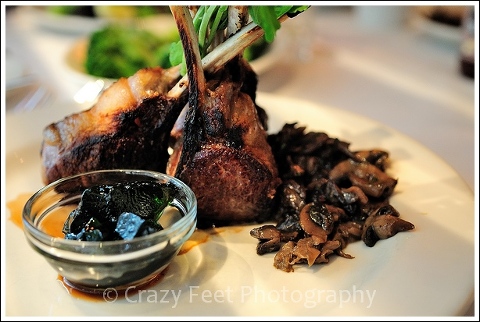 I know, I know, another lousy image.  I blame the heat.  It’s still better than no pictures at all, right?  I know you only come here to look at the pictures :-)

When we got outside it was still swelteringly hot & sticky.  There were people everywhere.  There were street stalls selling food everywhere.  There was even a van selling Mr. Whippy ice cream.  Oh how my mouth wanted some.  For once my body won out.  I didn’t have room for even one half spoonful of ice cream.  But before I leave New York some of that ice cream is going to be in my mouth.  Just not tonight.

0 comments
« Just Ask For a Basket
Boycotting The Menu »