So when you turn up in New York City for the first time, how the heck do you even begin to know where to go for a Big Breakfast Adventure?  That really goes for any big city, but NYC…it’s not big.  It’s huge.  HUGE.  So I went up to UrbanSpoon & poked around.  I didn’t even have a sense of the lay of the land – what neighborhood I would be in, how far apart everything was, even which way was up.  Truly a needle-in-a-haystack moment.  Then, as I was browsing through the lists of breakfast places…it hit me:  Penelope.  I have a cat called Penelope.  Seemed like a perfect way to pick a breakfast spot.  Hey, if the owner of Penelope can name her restaurant after her pet turtle, surely I can choose an eatery after my kitty’s namesake.

Penelope, I learned, is in Mid-town East in a neighborhood called Murray Hill.  I was excited.  I printed out a map & eagerly awaited my first morning in the Big Apple.  The day arrived & I was up early.  Very early, thanks to my pesky (& very noisy) neighbors.  Gotta love 2:30 am when the headboard on the other side of the hotel room wall starts banging rhythmically on the wall right behind your head.  UGH.  That turned out to be just one of many reasons why I will never stay at the New York Hilton again.

After several hours of email-by-sunrise I hopped in a cab & headed south.  It was already over 80 degrees outside.  The drive was magical.  That is, it was magical up until the cab driver asked me where 159 Lexington was.  Er……it’s my first day in New York & you’re a New York cabbie & you’re asking ME for directions?  Mercy.  Finally we pulled up outside & I could barely stand the anticipation as I shut the cab door & stepped on the sidewalk.  Hang on.  Something wasn’t quite right.  It was closed.  It was covered in scaffolding.  The inside was filled with builders crap.  Noooooooo!   The note on the door explained it all:  July 4 – 7 closed for re-modelling.  Re-opening on July 8th.  You have got to be kidding me.  It’s July 7th.  People.  Put a note on your website!!

Two days later, after a lengthy {& fantastic} walk photographing in Central Park at 6 am I once again headed south for 159 Lexington. 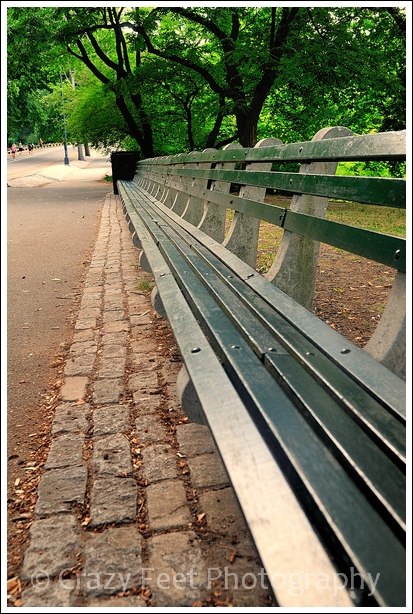 Now that's what you call a park bench

Woohoo!  Not only was Penelope open, it was packed.  Hey, nice re-mo folks!  There was one spot left on the long bench down the wall.  I took it.

The menu is small but interesting & I decided to do what I do in Seattle:  engage my server in helping me to decide.  I quickly discovered that people in New York are *different*.  My server looked at me a little oddly when I enquired what was good on the menu.  He got a  little impatient by the third question & finally gave me that “I-am-not-here-to-talk-to-you-I-just-want-to-get-you-some-food”  look.  As soon as I had put in my order he scurried off, right at the moment that a girl a few feet down the bench headed off for her day.  I slid down into her spot.  It was by the window & afforded me not only the gentle morning breeze but also an extra couple of stops of light.  Perfect.

The Penny Egg Sandwich with Sausage

It was good.  The croissant was flaky & messy…one sign of a good croissant.  The sausage was way yummy.  The pesto made a really fun & interesting change from ketchup to dip things in.   The OJ was real orange juice that had once-upon-a-time been inside an orange hanging from a tree.  The OJ was huge.  Large clearly means large at Penelope.  How refreshing!  I didn’t mind at all paying a large price for a large OJ.  The sandwich wasn’t huge & compared to Seattle it was expensive for what is was, but it was delicious & I was in New York so who cares? 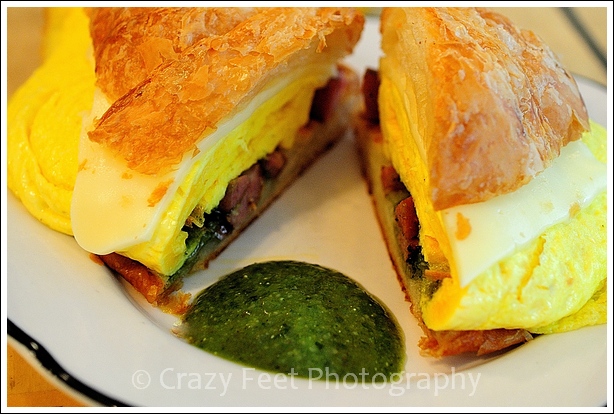 Penelope is a very cheery place in a very baby-blue-&-white kind of way.  I had a few days ago decided that New York is *loud*.  That includes Penelope.  The morning buzz at Penelope was more like a busy after-work bar but it was still a fun, warm, welcoming place to hang out & start the day.

The other thing about Penelope that stuck in my mind was the hand dryer in the bathroom.  It was so forceful that it actually made all your skin move in waves across your hands.  Yikes.  There are body parts I never want to let that hand dryer near.

1 comment
« Boycotting The Menu
The Real Deal about Grits & Biscuits »