I don’t know what it is about raisins, but I love them.  We always had large packets of raisins in the kitchen cupboards when I was growing up.  My mother baked a lot & I was always there helping – sieving (sifting) the flour, creaming the butter & sugar together, weighing out the dried fruit, cutting the glace cherries into pieces, chopping nuts, whatever needed doing.  Except the washing up.  {Truly} hated that bit.  Still do.

Whenever there was dried fruit or nuts involved some of it inevitably found its way into my tummy (not any of the stuff that was weighed you understand, since that would have thrown the recipe off)…candied peel, glace cherries, almonds, walnuts, sultanas, currants & raisins.  Especially the raisins.  Sometimes I’d eat them by the handful.  Slightly sticky, chewy & sweet.  When I got older & came home from school to an empty house I’d regularly get myself a snack of an apple (had to be  a green apple), a {large} slice of Cheddar cheese & a handful of raisins.  If you’ve never tried eating all 3 of those things together…heaven.  It’s still one of my favorite combinations of food.  In the north of England people like to eat fruit cake with Cheddar cheese on the side.  It’s that cheese & raisin thing again.  Truly, if you’ve never tried it, it’s good.  Really good.  I am really not sure where the raisin love comes from.  Maybe because I grew up in a house with {almost} no sweets (candy) and {rarely any} chocolate, raisins were the sweetest, closest thing to naughty that I could have.  Raisins were my chocolate.  Raisins were my candy.

So, there I was in Trader Joe’s.  I like it there.  A lot.  I was buying up the ingredients to whip up a couple of Holiday Rocky Road Pies (if you think after almost 10 years stateside I’d have worked up a taste for Pumpkin Pie,  I haven’t) when, while standing in line at the checkout, I was hit with a need for a little snack.  Just a little something to nibble on the ride home.  Trader Joe’s, for the uninitiated, is {healthy} snack heaven.  TJ’s has a veritable plethora of scrumptious, unique & healthy snacks.  Actually, TJs is just full of scrumptious, unique & healthy food.  Period.  I didn’t want a lot.  I didn’t want to spend a lot.  I just wanted nibbles.  I also wanted something a little on the naughty side.  You know, basically healthy with a touch of naughtiness.   I scanned the shelves right there by the till & there they were:  Chocolate Covered Raisins.  Basically healthy with a touch of naughtiness.  Chocolate covered raisins feel like they’re naughty, taste like they’re naughty, but really they’re pretty darn good for you.  Shhh.  Don’t tell anyone.  Especially your brain. 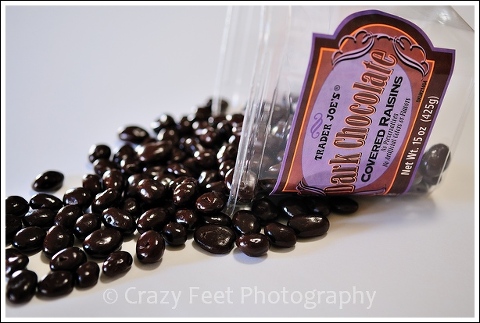 They are juicier, tastier & definitely darker.  Bolder, deeper, more flavorful.  Just more.  Even though they are…less. I did manage to keep the tub pretty much intact until I got home, so that I could photograph them.  These puppies deserved their photograph to be taken.  But then, once the photos were done, it was a simply impossible task not to just nibble, nibble, nibble.  So I nibbled.  Unashamedly nibbled my way through the whole tub until the very last raisin had slipped passed my lips.  And although they are just  little bit naughty, I felt no guilt, because they are, after all, mainly healthy.

0 comments
« All Hopped Up On Delicious
Inescapably Linked »