Ever since The Flying Biscuit Breakfast Adventure in Atlanta, Reid has been inescapably linked to breakfast in my mind.  So when he showed up in Seattle this week it was only fitting that we had breakfast.  He was staying at the Hyatt in Bellevue, which gave me the perfect opportunity to try out breakfast at their newly renovated eatery, Twisted Cork.  I had enjoyed breakfast at the previous incarnation – 08 Seafood Grill (although it was a very typical hotel restaurant menu) – so I was curious about the change.

Mic & I rolled up before Reid.  Isn’t that always the way?  The closer you are to a location the later you are likely to show up.  It was pretty dark inside Twisted Cork, lighting which seemed far more suited to dinner than breakfast.  We slid into an enormous booth & started eyeing up the menu.  As hotel restaurant menus go, it was all pretty exciting.  Unfortunately, Twisted Cork don’t have their menu on their website, which means we have to rely on my memory.  Oooops. 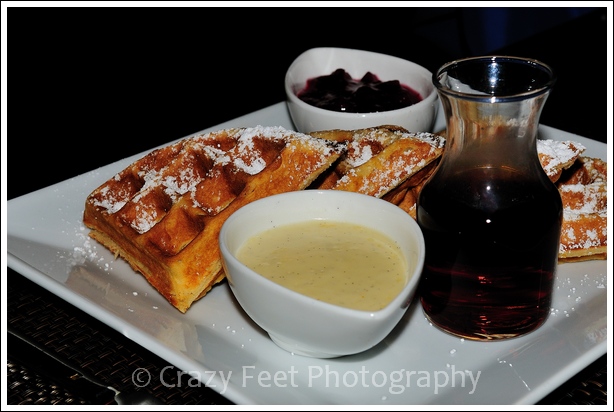 Fresh juice came while we were waiting for Reid.  And it really was fresh juice.  Woohoo!  You know those places that write “fresh juice” on the menu & then merrily pour you a glass out of a carton?  Yeah.  This wasn’t one of those.  My grapefruit juice really had been part of a grapefruit earlier in it’s life.

Mic decided on the waffles, which came with vanilla something-or-other dipping sauce & another little dish of deep, dark cherries in a thick juice.  Yum. 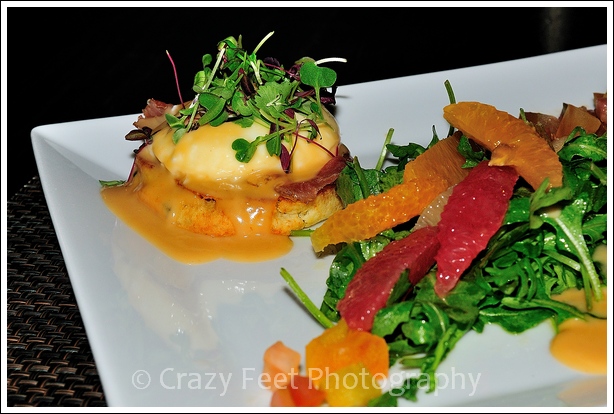 I finally settled on the Eggs Benedict although my taste-buds were all over the menu, wanting to try this, wanting to try that.  It was the chive biscuits that settled the what-to-have battle going on in my head.  Our server had assured me that the biscuits were fantastic & while regulars will know that I have not yet succumbed to the predilection for biscuits that most Americans have, I thought that maybe if it was just half a biscuit, had chives in it (yum, chives!) & was topped with prosciutto,an egg & some great hollandaise sauce, I might very well slide it past my mouth without it noticing that it was really a biscuit.

The presentation was beautiful.  It just didn’t look like breakfast.  There was a significant heap of salad involved, making it seem more like lunch than breakfast.  Must be one of those “brunch” things.  The whole dish was delicious.  The biscuits were great – certainly some of the best biscuits I’ve ever eaten.  My only other observation was that the prosciutto was rather lost in it all.  If I’d closed my eyes I am not sure I would have known that there was any meat sneakily hiding in between the egg & the biscuit.  So either add a few more slices of prosciutto or use a different meat. 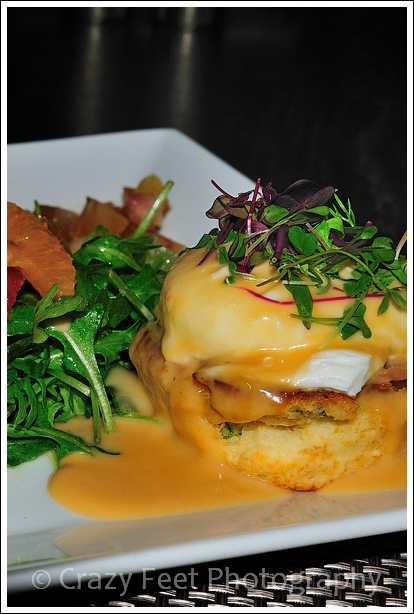 The other half of my Eggs Benedict - where IS that meat?

Reid went for the salmon version of the Eggs Benedict, but if my memory serves me correctly (which it very well may not) I don’t think that came with the chive biscuits.  Either way, his plate was cleaned up pretty quick.  He had already been pumping iron in the gym so I am sure he was more than ready for a plate of hot, proteinous goodness.  He got it.  (No, I am sure proteinous is not a real word, but I am also sure that you know exactly what I mean.)

When Mic & I had been perusing the menu initially I had noticed beignets lurking there & since Mic had never experienced one, I decided that we needed to share a plate between the 3 of us.  Dessert after breakfast?   Makes {perfect} sense to me.  I don’t think Reid really wanted beignets, but I didn’t exactly have to twist his arm either.  Actually, I’m absolutely certain that I couldn’t have twisted his arm – Reid’s biceps are bigger than my thigh. 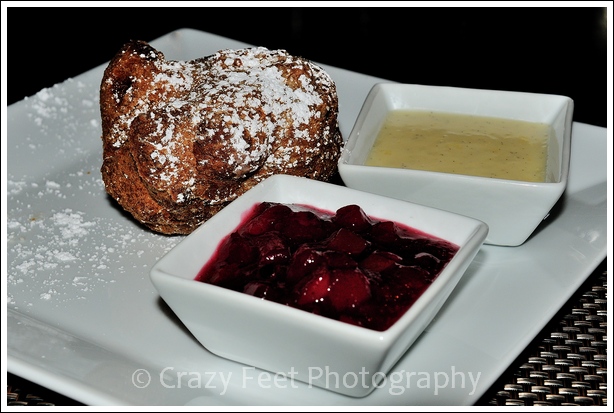 This is the point at which it all went a bit sideways for me.  3 beignets, each bigger than my fist, arrived at the table (I SWEAR the menu said 6) along with two little pots of dipping sauce – one vanilla & one of those deep, dark cherries in sauce.  The vanilla sauce was lovely, the cherries divine, the beignets…bleugh.  Beignets are meant to be small, one-or-two-bites-sized, not the size of an orange.  And I have {huge} issues with making beignets with wholemeal flour.  It’s just wrong.  And if they didn’t use wholemeal flour, why was the inside of the beignet grey?  They had also been overcooked – they should be tender.  Sadly, not great beignets.  But then I am, as you know by now, a tad picky about anything that could even vaguely be considered pastry.  Mic, never fear – I’ll make you proper beignets real soon so you know what they really should taste like.  Here are some Apple Beignets made by the lovely Kate Shaw (Thanks Kate!  FANTASTIC first effort!) just a few weeks ago…just to give you an idea of what they should look like, even if it doesn’t help with what they should taste like. 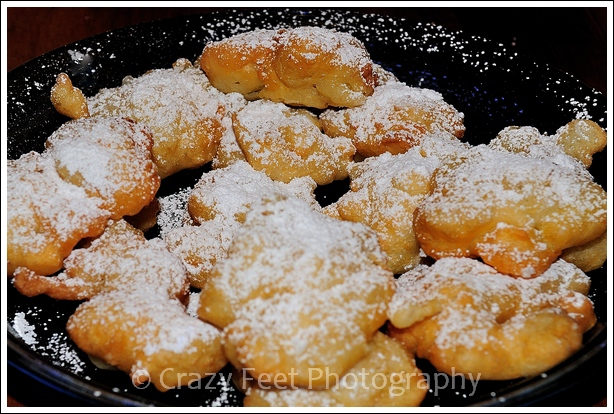 I want to come back to Twisted Cork & eat just about everything else on their creative breakfast menu.  I mean, who wouldn’t want to try stuffed French toast infused with bananas, honey mascarpone and Nutella, served with sour cherry compote, Myers rum maple syrup and pecan brittle?!

Oh, just a quick request lovely Twisted Cork people…would you turn up the lights a touch?  Thanks!