As Much As I Love Bacon

When I spied Mo’s Dark Bacon Bar on a stylishly merchandised table in Watson & Kennedy the other day I almost fell upon it like a marathon runner passing a water station.  The box alone was enough to make me think about eloping.  Except, as much as I love bacon, I love doing a great job for my boss more.  Michelle (that foxy chick from Mode Salon) was with me.  In fact, I hold her entirely responsible for me even being in Watson & Kennedy in the first place.  Our lunch started out as an innocent salad & ended up with me spending 4 times as many $$ on chocolate as I had on an entire plateful of veggies.  Sigh.

I had heard of the brand Vosges before, having received some of their hot chocolate as a gift a few years previously.  I had never run across the bars before though & there was a whole pile of different flavors.  Not content with just one, I took a fancy to the Peanut Butter Bonbon Bar as a runner up. 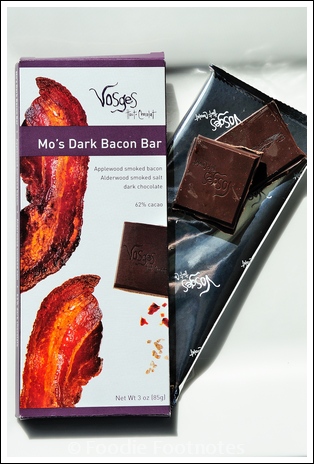 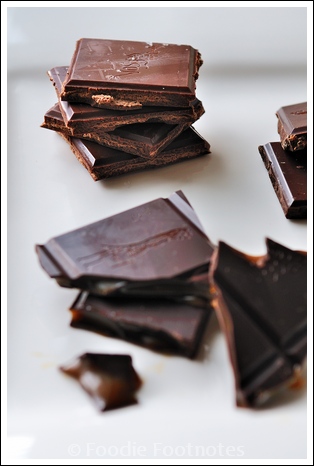 Chic, stylish, high-impact boxes (just look at that bacon!) each holding 3 oz (85g) of what I was sure would be oh-so-delicious.  How could it not be?  62% chocolate with bits of bacon in it.  Are you kidding me? 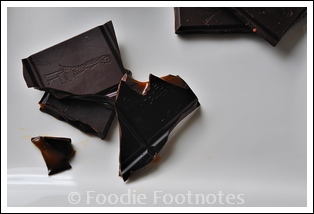 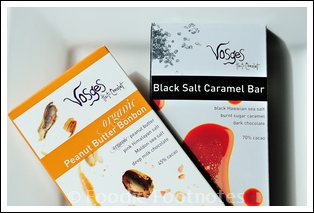 The boxes, when I had a chance to read them, were a little disturbing.  I am not sure that I really want to be faced with the photo & bio of a strange girl when I am unwrapping my chocolate – even if she is the owner.  By all means put them on your website, but on every bar?  I’d much rather read about the chocolate & any other juicy tidbits of information on whatever it was I was about to slide between my lips.  But maybe that’s just me.   And if, for some reason, the photo is somehow necessary, would it be OK to have the person dressed in chef’s whites rather than in something out of a Las Vegas Strip nightclub?  The final straw – quelle horeur – on the back of one box it read: “How to enjoy an exotic candy bar”.  Candy bar??  OK, now I am just plain worried.  And, it turns out, with good reason.

Maybe my expectations were too high, but what with the price tag & the raving ramblings on the glossy boxes I was expecting something spectacular.  Something weep-worthy.  Something that would make my toes curl & my lips quiver.  And after all, this was chocolate with bacon in it.  How could it possibly be anything but, you know, the “O” word of chocolate bars?

We have a saying in England:  all mouth and no trousers which roughly translates to all talk and no action or in this case, all hype & no taste.  And let me tell you, I am gutted about it.  Even now, several weeks later (it always takes me an *age* to write less-than-glowing reviews because I don’t like doing it) I am still mad as heck that I spent $18 on two bars of nasty chocolate.  Yes.  I really did type nasty.  I meant it.  After eating the first square of the Bacon Bar and going “Ugh”, I invited Miss Connie (oh bacon goddess if-ever-there-was-one) to join me in my little tasting room, I mean office.  The verdict: B A D.  The chocolate tastes old, somehow rather dusty.  It doesn’t taste of chocolate.  I still don’t believe it could taste that bad.  But I don’t want to dwell on it any longer.  I still, weeks later, haven’t eaten the whole bar.  In fact, I just checked and I haven’t eaten half of it.  $9 notwithstanding, why would I?  It’s *nasty*.

I was sure that the runner-up, the Peanut Butter Bonbon bar would make everything right with the world.  I kept Miss Connie in my office so we could do this one together & give support to each other if necessary.  It was necessary.  Can you say horrid?  I’m serious.  We just sat and looked at each other across my desk.  Could this possibly be happening?  Was this real?  I’d rather eat 371 Reece’s Peanut Butter Cups than one more square of this bar.  I am not joking.  We ate a square each.  The rest remains, to this day, in the box.  Untouched.  The texture was dry.  The flavor was…I don’t even have the words.  It tastes nothing like peanut butter, people. 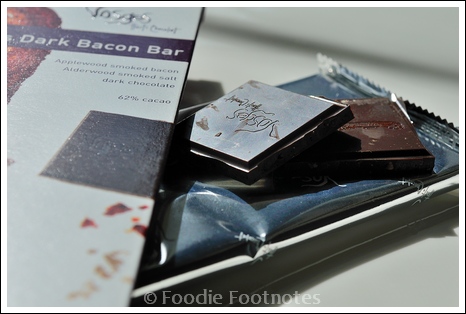 Still unable to process the atrocities that these bars are, or maybe because I am just plain stubborn, or just plain stupid…I bought a third bar.  Not wanting to get a bank loan to secure one from Watson & Kennedy, I headed to Whole Foods.  There was a whole slew of flavors to pick from.  I picked the one that I thought would be most likely to make me happy & hardest for them to make badly.  Hey, I’m trying my darnedest to find something good to say here.  Gah, I hate writing unfavorable reviews.

Of the 3, the Black Salt Caramel Bar was the most palatable.  If I was in a tight spot and that was all there was, I’d eat it.  There is only 1 square of that bar left.  It’s not a bad bar.  It’s not a particularly good bar either, but at least it’s edible.  And even relatively enjoyable.

I need to stop.  This post has been depressing me for weeks & now I just want it to be over.  I’m sorry.  I can’t lie to my peeps – my lovely readers who expect truth, objectivity & sound advice from their favorite stateside English foodie.

The moral of the story: while I usually find that “you get what you pay for”, there are some instances where this is absolutely not the case.