My twin made me do it.  She said, “Have you tried Ezell’s?  Because really, Ezell’s is stinking awesome.”  So really, how could I not go and try Ezell’s?  If my twin said so, it must be true.  Oh, except that my twin thinks Bakery Nouveau is the best French Patisserie in town, and she is clearly wrong about that.  <<<SLAP>>>  Ouch!  I felt that, twin.

As I careered off the 522 towards Woodinville I thought, “Hang on.  This all looks rather familiar.”  And then as I turned the corner, there was Molbak’s.  Oh how I love Molbak’s.  Haven’t been in forever, clearly, otherwise I would have known where Ezell’s was.

Ezell’s was empty, which I thought a little odd perhaps, for a Friday evening.  Doesn’t everyone eat Fried Chicken on a Friday night?  When I strolled in & up to the counter the gal told me that since they were almost closing there were no mashed potatoes and no corn left.  OK, wait.  8 pm on a Friday evening & you’re about to close?  You’re a take-away Fried Chicken shop!  What is the world coming to?

From the menu I ordered my 3 piece, dark meat meal, which came with 2 sides & a roll.  I went with Potato Salad & Coleslaw.  I really wanted mash, but what can ya do when the mash is all gone?

The next part of the evening was sheer torture.  The drive home.  I swear it was the longest 33.08 mile drive of my life.  The Fried Chicken nestled comfortably in the front passenger seat foot-well, with the fresh, steamy, chicken-y aroma wafting upwards towards my nose.  For thirty-three miles!  My stomach started growling after the first 300 feet.  I am {completely} amazed that I didn’t pull over & eat the entire lot right there on the side of the freeway.  PS. Did I really drive all that way for Fried Chicken?? 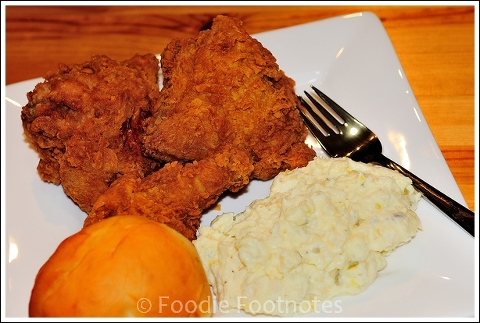 Do you have any idea how hard it was to not eat this before I’d got some shots of it?  There seems to be an awful lot of {rhetorical} questions in this post.

The little tubs of sides are like the tardis in Dr. Who.  No, they don’t transport you to another time & place and no, they don’t make you want to hide behind the couch.  The tubs – they look tiny on the outside but when you open them up there’s enough food in there to feed the 5 thousand.  Or at least a couple.

I was saddened to discover on opening my second tardis-like tub that it contained exactly the same as the first one: potato salad.  Well, it’s a good job I like potato salad, isn’t it?  Ezell’s Potato Salad is a bit pickle-y for my taste.  And a bit un-lumpy.  It was kinda like eating cold mash with pickle chips in.  Meh. 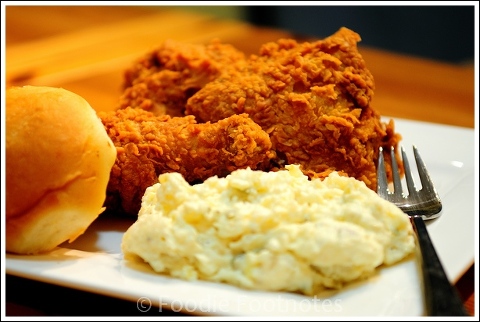 So here, from the girl who has never, in her whole life, eaten Fried Chicken that wasn’t KFC (which, incidentally, she has a huge emotional attachment to), is the verdict:  Stinking awesome.

It is {very} different to KFC.  Just as moist, juicy & succulent, (yeah, you want some now, huh) but crunchier & with a completely different flavor (where’s my 11 secret herbs & spices?).  The chicken pieces are bigger, but somehow have less meat on them.  Weird how that could be.  Nonetheless, stinking awesome.

Thanks for the suggestion, twin.