The Tardy Husband has finally arrived stateside.  In his honor, his wife Martina and I took him to brunch.  It’s just an all-American thing to do.  And you know me – I wouldn’t pass up a great breakfast for {almost} anything.  I had concluded that Emmer & Rye was a perfect spot for our “Welcome to America” brunch festivities.  Nestled among the swanky stores on Queen Anne Avenue’s main drag in a charming restored Victorian house & owned by a chef with the vision of locally derived, seasonally inspired cuisine, it seemed like the ultimate introduction to great Seattle grub.

The whole party started off particularly well when our lovely server’s eyes flew wide open as she gasped, “Oh, yes!” to my eternal question “Is your hot chocolate good?”  She was right, by the way.  It wasn’t super chocolaty, but it was a far cry from the wet ‘n’ warm Hershey’s syrup & skimmed milk abominations that most places still insist on serving up. 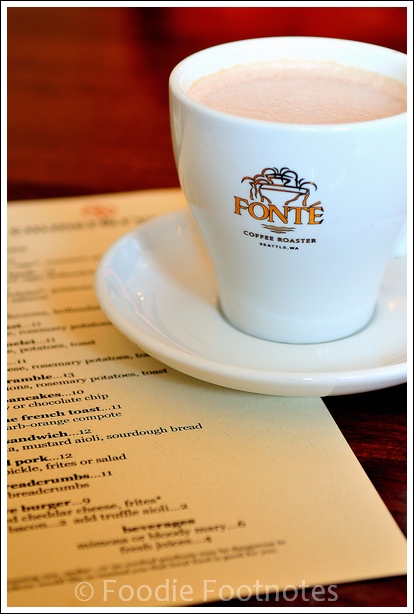 Today was all about our guest of honor.  It was so fun to hear a real Brummie accent again.   And it was so nice to see Martina laughing & smiling with the hubs that she has been separated from for 11 months.  They wore matching Belstaff jackets – so cute.

When it came to the menu, Neil was a really good sport.  Martina & I suggested that he should go with something completely out of his comfort zone.  He was game.  Biscuits & Gravy meets newly-relocated Brit. 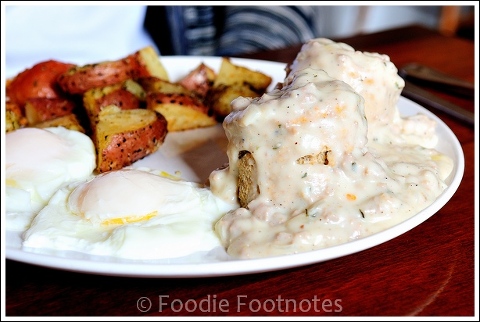 This was a morning for new experiences.  I played along by choosing the Farro Fries (with poached eggs, wild mushrooms, hollandaise $13) simply because I had no idea what they were.  Turns out farro is a type of wheat which Chef Caswell uses to make into bread.  This bread is then turned into ‘fries’ – dense, crunchy logs of goodness.  Stacked up & topped with poached eggs, sauteed wild mushrooms & the lightest, silkiest hollandaise.  Different – for sure.  Tasty – very. 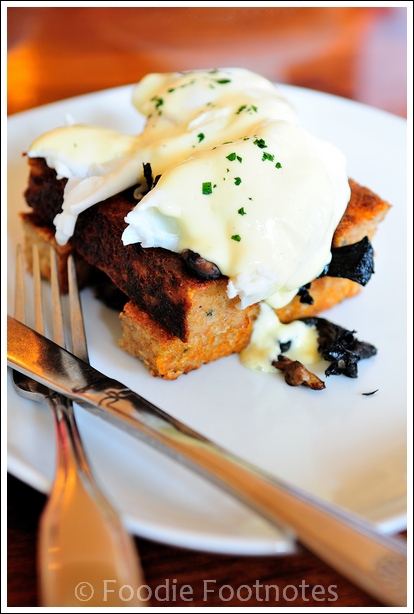 Talking of new experiences, I wondered if Neil might get a kick out of hearing a few stories from a 10-year stateside veteran.  Along with a few tips & tricks, including such sage advice as…never leave home without your driver’s license, always carry your insurance & registration docs in your car, and don’t cross a cop unless you need a {really} safe place to sleep for the night. 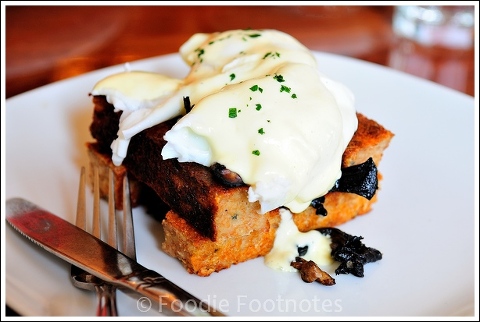 Seriously consider buying a radar detector (but don’t use it in Virginia or Washington D.C & use it but don’t mount it on your windshield (windscreen) in Minnesota or California).  There are traffic cops EVERYWHERE.  I swear there are more traffic cops in one square mile here than in the whole of the British Isles put together.  Which reminds me – bear in mind that when you cross those invisible state lines all the rules change.  Not knowing them is no excuse.  Oh, and remember when you’re in Oregon that it’s illegal to pump your own gas (petrol).  When you drive into California all the food that you have with you will be confiscated.  Well, maybe not all of it, but it’s just downright easier not having any with you when you stop at the Border Crossing.  Yes, I know you’re still in the same country. 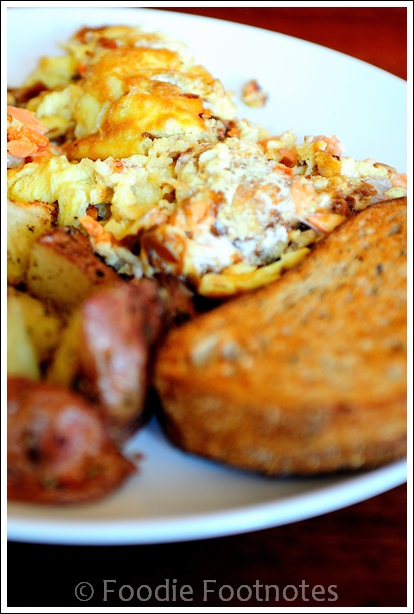 Other words of wisdom…if you’re driving cross-country, fill up every time you see a gas station.  Even if you still have three-quarters of a tank.  You just never know when you’re going to see another one.  It may be a while.  Especially if it’s a holiday.

If you think that living in America is no different to living in England, since we do, after all, speak the same language – think again.  While most Brits understand most Americanisms (it’s all those imported TV shows & movies), hardly any Americans understand hardly any English-isms.  In that respect, we’re like chalk & cheese.  Let’s not beat about the bush on this one.

There’s all the regular stuff like gas = petrol, grocery store = supermarket, hood = bonnet, neighborhood = suburb, yard = garden, cookies = biscuits.  Talking of biscuits – make sure you always know where the nearest Cost-Plus World Market is.  For those days when only a Chocolate Hobnob will do.  (Aside: My National Bakery School buddy, Maria, who now lives in Australia was on the team that invented the Chocolate Hobnob.  She has helped make an entire generation happy.  So proud.)

Emmer & Rye do desserts in two different sizes – mini & regular.  I downed a regular emmer shortcake, rhubarb-orange compote ($8).  Honestly I could have done with a mini; and really honestly it wasn’t the best dessert.  The rhubarb was stringy & not very tart (isn’t that why we eat rhubarb?) & the shortcake was made with a whole grain, which resulted in it being a bit on the dry side.  I’ve never been a huge fan of wholewheat anything.  This did not make me change my mind on the topic.  I don’t know where the ‘orange’ part was.  I certainly couldn’t taste it in the compote. 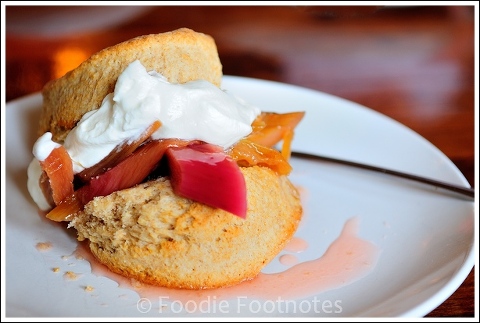 Other stuff it might be good to know include that a two-fingered salute will be met with blank stares & be completely ineffective at conveying your thoughts, while a one-fingered salute could land you in a fist-fight or the Big House depending on who is on the receiving end.  Sometimes people carry guns & consequently sometimes things don’t end well.

Martina made a dessert choice that ended very well.  The chocolate brownie with caramel sauce ($4 / $8) sounds pretty ordinary, but in real life – *amazing*.  I had instant food-envy when I stole a tiny corner of brownie with a little scoopette of that sauce.  The depth of flavor in both was extraordinary.  Wow. 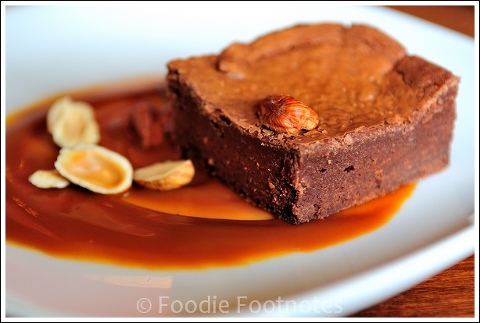 You should also get used to complete strangers being familiar with you.  Embrace it.  In the grocery store, on the airplane, in the street.  Checkers at the grocery store will call you by your first name, ask you what you’re doing for the weekend, bag your groceries for you & then ask if they can carry them to your car.  In England they will only speak to you if there is a National Emergency.  And then it will be under duress.  And they’ll be grumpy about it for a week afterwards.

Neil’s dessert did not make anyone grumpy.  The butterscotch chocolate pot de creme, oatmeal cookie ($4 / $8) was one little pot of heaven. Now, Neil…I know you’ve spent most of your adult life trying to make the switch from Imperial to Metric, but you can stop trying now.  It’s all pounds here, baby.  Or cups.  One cup = eight ounces.  Except it’s not really very accurate when you’re talking about dry stuff.  Dry stuff settles.  Oh, and I forgot to mention one very important thing:  Tipping.  If you receive a service, you tip.  The hairdresser, the masseur, restaurant servers, the hotel maid, the hotel concierge & the valet.  If in doubt, tip.  It’s a alien concept to us Brits, I know, but folks here don’t realize that it’s a cultural thing…they just think we’re mean. They also think everyone with a British accent is super-smart.  Make the most of that.  Your accent will take you far.  Especially if you tip. 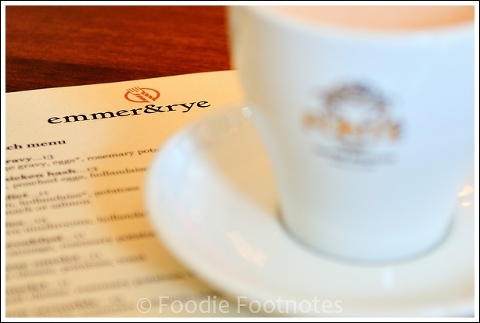 Emmer & Rye is very “earthy” cooking.  All whole grains and wholesomeness.  So much so that you can almost taste the soil from whence it came.

We hung around Emmer & Rye, laughing, for a very long time.  Martina was enthralled with the house & the decor.  The server was enthralled by our 3 crazy accents.  Neil was just enthralled by everything.  It was a lovely way to spend a Saturday morning.