Today was a great day.  It involved a 6¼ hour brunch.  I know that because our brunch reservation was for 10 am.  Later, when I hopped into my car after filling up with gas, I glanced at the clock.  It was 4:20 pm, and I had only waved bye-bye to my brunch buddies 5 minutes earlier.  I mean, I knew we were all having a lot of fun, but I didn’t realize it had been 6¼ hours of fun.

Mini-Me & The Hubs met me at Ma’ono, recently morphed from the dazzling Spring Hill into a Hawaiian Fried Chicken & Whisky extravaganza.  Ma’ono’s website will tell you it’s “Inspired by Hawaii and perfect for sharing, our new menu encourages you to have a bit more fun with it all”.  Oh yeah.  We had fun alright.

The Hubs told me that fried chicken & whisky are two of his favorite things, so I can see another visit to Ma’ono in my not-too-distant future.  Well, at least, I hope they invite me along when they head back over that way for some fried chicken fun.

The brunch menu is essentially the same as it was when it was called Spring Hill, aka awesome.  Since I’ve been to Spring Hill a few times and never been disappointed, I was eager to introduce Mini-Me & The Hubs to this West Seattle gem, change of name or not.  I steered away from old favorites such as the Bone-in Ham Steak (I can still taste that bad boy almost 2 years later), The Spring Hole (that Sausage Gravy is the bomb) and the Corned Beef Hash (be still my beating heart), and headed straight for a classic: The Croque Madame.  Merci. 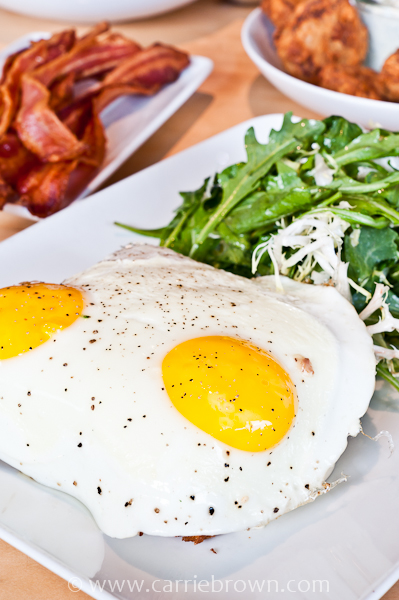 Croque Madame – Westphalian ham, gruyere, sunny side-up eggs, arugula/frisee salad ($13).  Of course I added a side of bacon, because breakfast isn’t breakfast if there’s no bacon.  This was one substantial sucker of a sandwich.  There’s mountains of meat hiding under those perfectly fried eggs, people.

Mini-Me downed French Toast with fried chicken nuggets and sausage plus fruit and whipped cream ($12), although it would be fair to say that she had a little help from The Hubs and I. 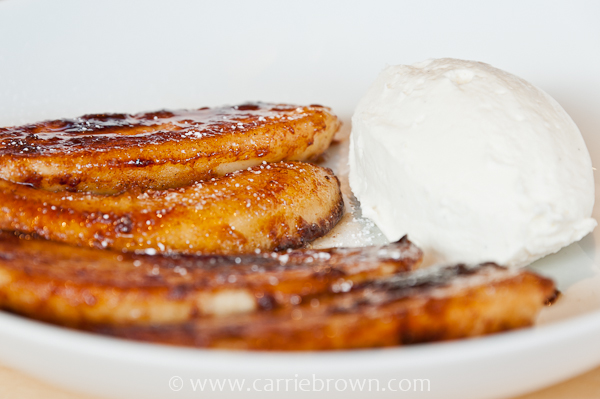 No one expected the fruit to show up in the form of deep fried, caramelized bananas.  I didn’t hear any complaints though. 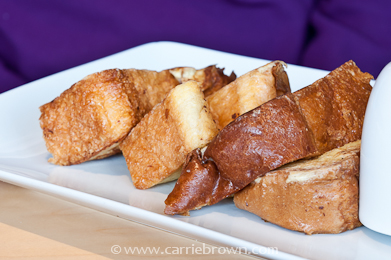 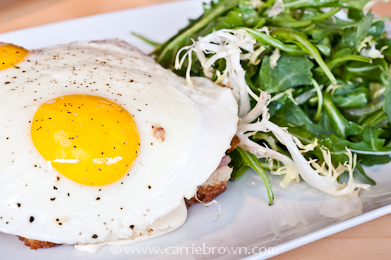 The Hubs got his brunch on with a Spring Hole – Griddled bread with two eggs, sausage gravy ($10). 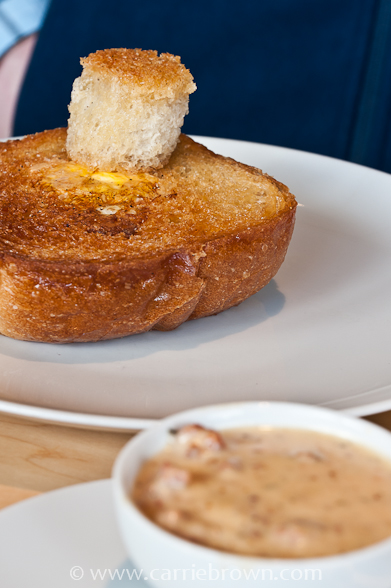 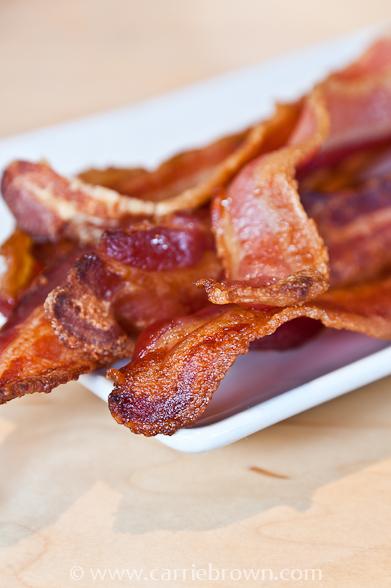 If Mini-Me’s fried chicken nuggets are an indication of the general state of the fried chicken dinners at Ma’ono, I can predict with a great deal of certainty that we’ll be back for one of those dinners.  I think we should make Swag Guy take us.  He owes me.  (Hi, Swag Guy! Love you!) 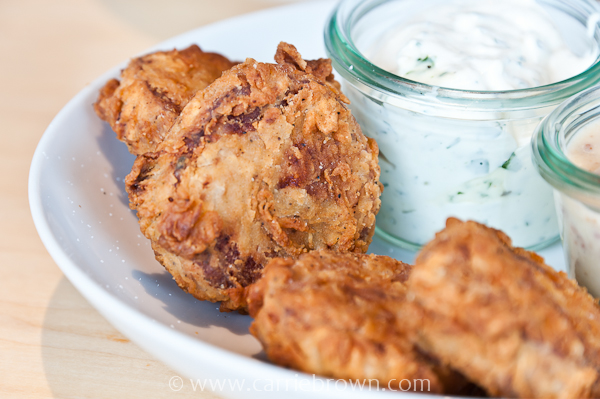 The tzatziki dip that came with them.  Oh my.

I kept getting food envy over The Hubs Spring Hole.  That Sausage Gravy, man.  On fried bread.  With eggs in.  Holy heavenly breakfast, Batman. 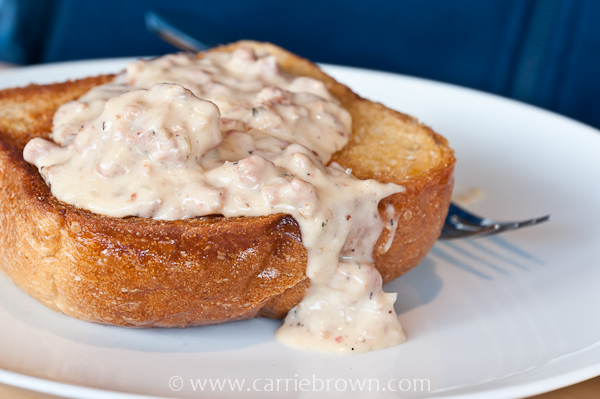 We sat there, in the window, with our bevy of dishes sprawled out all over the table.  We talked.  The Hubs got all technical when he whipped his laptop out to show me some stuff.  We talked some more.  I finally polished off my Croque Madame as well as hoovering up a few things from Mini-Me’s side of the table.  A fried chicken nugget here, a scoop of fried, caramelized banana there.

I suggested that we needed dessert, and then on a whim, offered up Shoofly Pie across the street as a suitable dessert spot.  Mini-Me was outnumbered by The Hubs and I.  It’s not hard to be outnumbered when there’s only 3 of you – and 1 of them is a guy & the other has the appetite of an entire army. 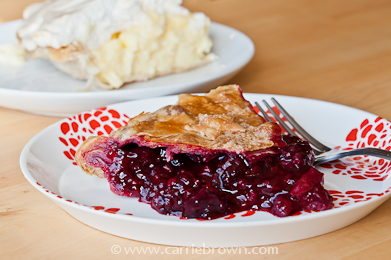 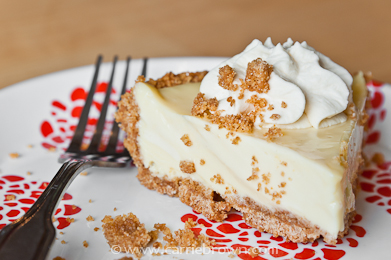 Shoofly Pie did not disappoint.  A case crammed full of pie after pie.  Honestly, the Mac ‘N’ Cheese Pie made me feel nauseous, but since we were there for dessert pies, I decided to just ignore it and move right along.  It was a tough, tough choice.  I wanted something fruity & was almost swayed by the Black Raspberry Pie, but the Lemon Meringue was calling my name and that Key Lime Pie was doing a great job of trying to trip me up too. 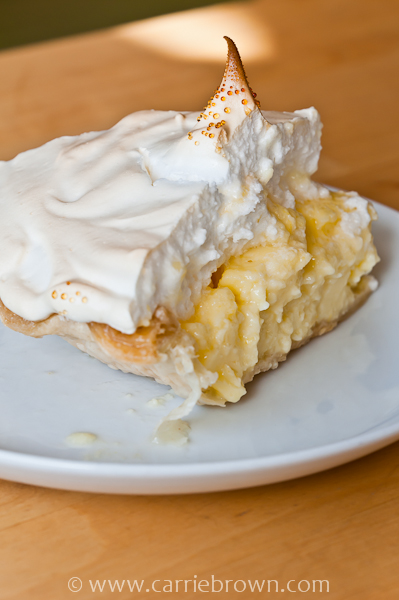 Mini-Me settled for the Key Lime, The Hubs went for the Black Raspberry, and that made everything a lot clearer for me.  I was destined to have the Lemon Meringue.  We sat in the window on that beautiful sunny Sunday afternoon & ate Shoofly pies.  Good pies.  Lots of people came and went, pies in hand.  A few tarried awhile and downed their pie alongside us.  There was lots of pie love going down in West Seattle today.

The Pie Lady was adorable, and if I might be as bold as to say, a little nutty.  But I’ve found that a little nutty is generally a good, fun thing.  It’s when people get a lot nutty that we should start to worry.  The Pie Lady is also the proud owner of the first place I have ever seen that serves Chocolate Mint Tea.  Chocolate Mint Tea!  Now I knew, by virtue of my mate Bob the Potter, that those clever plant people have cultivated a mint plant that tastes like chocolate, but I didn’t know that some other clever people had decided to dry it, chop it, bag it in little mesh bags & sell it to us Mint Tea Drinkers to guzzle.  I’ll be growing my own this year.  And making ice cream with it.

And so the 6¼ hour brunch came to a close over a cup of Chocolate Mint Tea & a few crumbs of escapee pie.  It was a beautiful way to spend a Sunday.

Now, when are we going to Ma’ono for a Fried Chicken & Whisky dinner?  We should definitely plan that.

3 comments
« All Kinds of Tart Going On
In A Retro, Tatty kind of Way »