In the last 3 weeks I have had 2 invitations to birthday dinners where I was the only person invited who was not an immediate relative of the Birthday Boy.  Both dinners ended with cupcakes, but that, and the fact that both the Birthday Boys were male, is where the similarity ended.  In March, Sam invited me to his 10th Birthday Dinner with his family at their home.  That dinner involved swathes of planked roasted salmon & terribly grown-up vegetables like potatoes au gratin made with fresh chicken stock.  Then last night I joined Mini-Me and The Hubs over at Ma’ono in West Seattle for an enormous stash of Fried Chicken, where The Hubs well & truly got his Fried Chicken on.  He even dressed for the occasion.  After all, red checkered shirts are what eating Fried Chicken is all about. 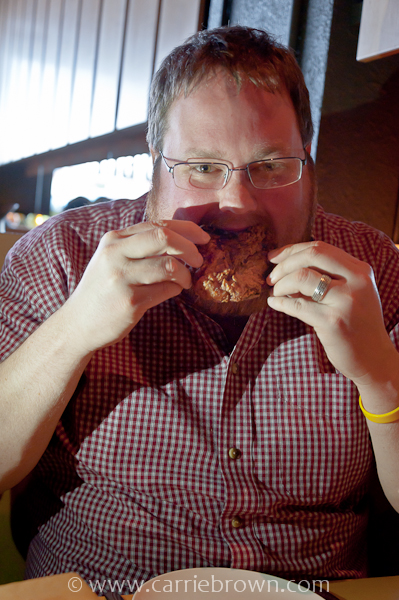 Before we get to the Fried Chicken though, let me tell you about getting to West Seattle from the eastside for 6 pm on a Friday night.

Don’t they realize we have chicken to get to???

I wish I were on it.

Parking, on the other hand, was a breeze.  An hour & fifteen minutes after leaving home, I was sauntering up to Ma’ono.  Except I wasn’t really sauntering because I was late and late will never do. 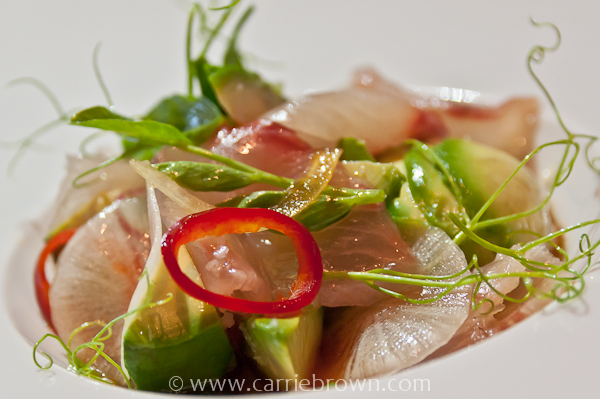 Mini-Me & The Hubs had already ordered up a couple of special appetizers.  The Hubs was already tying one on with a large glass of Hudson 4 Grain.  Hey, it was his birthday.

I added the Beet & Apple salad to the mix.  Shortly thereafter we were in appetizer nirvana.  The Kampachi (above) was divine.  So divine that even Mini-Me (who does not let raw fish passed her lips) declared it so. 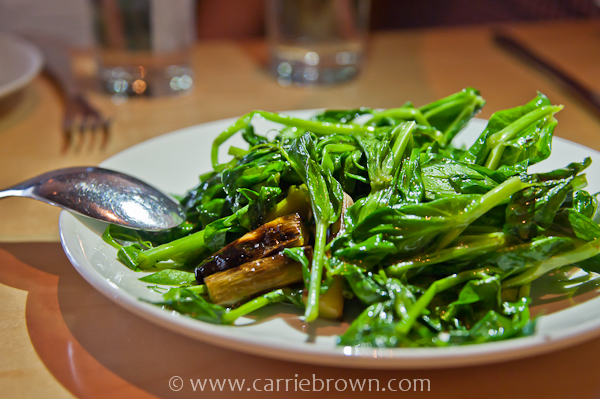 Who ever knew that the humble pea vine could taste so unlike what you’d always imagine a stalk would taste like?  Pea vines rock.  I have no idea what else was in it since I wasn’t there when it was ordered.  I can only tell you, “Order pea vines.”  “Immediately.” 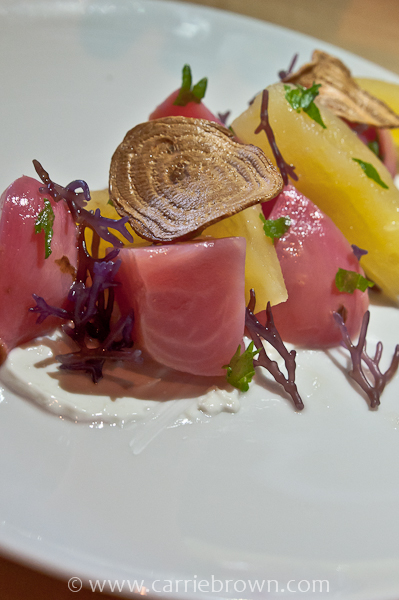 And this.  This almost brought me to tears.  Those purple branchy things tasted fantastic.  The apples were incredibly crisp and sweet and intensely flavored.  The beets were perfectly roasted.  And, on top of all that, this has to be one of the prettiest plates served up anywhere.  They lied about the horseradish yoghurt though.  About blew my head off. 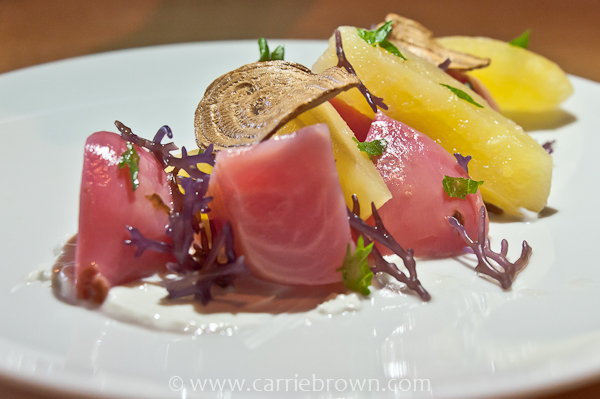 Finally, The Moment had arrived.  The moment of the Fried Chicken.  And we saw that it was good.  Very good.  The Hubs declared it amazing Fried Chicken.  It got very quiet at our table.  It had been pretty noisy up to this point. 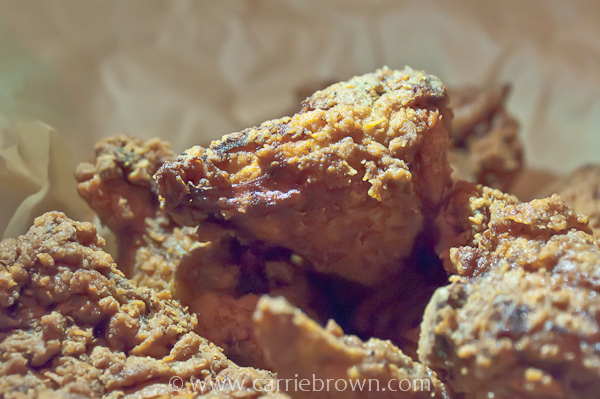 We ate Fried Chicken until we couldn’t eat any more.  It was juicy, succulent, flavorful.  The coating was crunchy, seasoned, non-greasy. 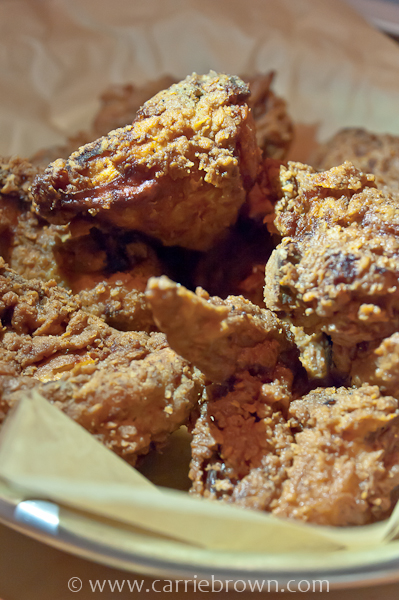 The dipping sauces were WAY. TOO. HOT.  But they sure looked pretty.  We didn’t even touch the rice and kimchi that came to the table with the chicken.  We’re sure it was lovely.  We just wanted Fried Chicken. 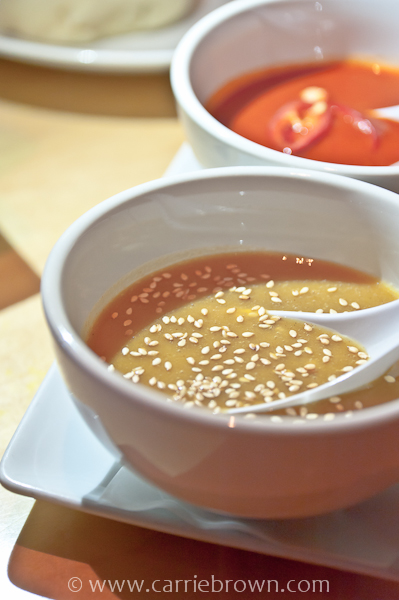 The Hubs had a couple of Manapua (Steamed BBQ Pork Buns) to boot.  They serve them with cucumber and shoyu-chili dip. 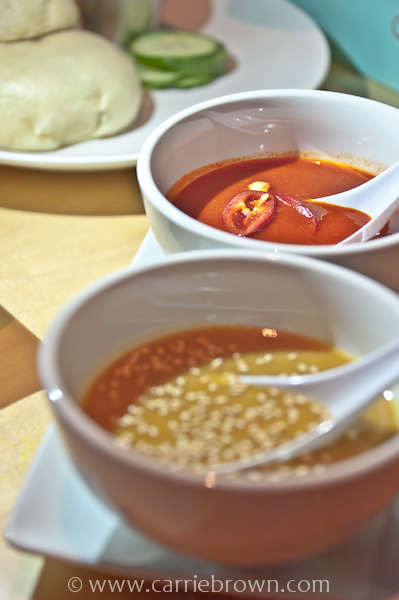 Once we had eaten the chicken, we had to tackle 6 cupcakes between us.  Had to because it was The Hubs birthday and it was just the right thing to do.  Plus, Mini-Me had valiantly battled traffic & even made up cupcake names in order to get exactly the perfect six from Trophy Cupcakes at The Bravern.  Those cupcakes were going down if we had to sit there all night.

We were up for the challenge.  Until it came to the second cupcake.  Mini-Me ploughed through hers, The Hubs refused to even start his and I had to take a break half way through.  But in the end, we made it.  It’s been a long, long time since I’ve been so full that I declared I could not eat one. more. bite.

Lastly, Mini-Me got really mad because I had called ahead and paid the bill before we even got there.  She’s says I’m sneaky.  I say I just wanted to buy The Hubs a birthday dinner without having a fight at the table & embarrassing Celessa the server.

Pretty much this was an awesome, awesome night.  I love those two.  Oh and THANKS, Mini-Me for being such a fabulous lighting assistant in a ridiculously dark restaurant.

4 comments
« A Tropical Stampede
Because Mushrooms Are Proof »