Staring Keenly At His Oysters

I think I fell in love today.  Maybe I didn’t fall in love, exactly, but something definitely happened.  Right there in the middle of the street at the Ballard Farmers Market.  In broad daylight!

But first, before everyone gets too excitable, let me tell you about the food – because the food was stinkin’ awesome.  I had brunch this morning with Mr. & Mrs. Milligan.  Mrs. Milligan is my absolute favorite pregnant lady, and she is, at last, looking decidedly pregnant.  To be honest, I think she’s ready for Junior to pack up and move on out.  The Milligan household is eagerly awaiting the day when they can strap their son & heir across their chests & go back to hiking up mountains & conquering all uncharted territory west of the Mississippi.

Volterra is delightful.  Kati, straight out the gate, is leading the pack in the “Awesomest Server of the Year Championship”.  I hadn’t ever thought of having a Servers Championship before, but Kati totally makes me want to. 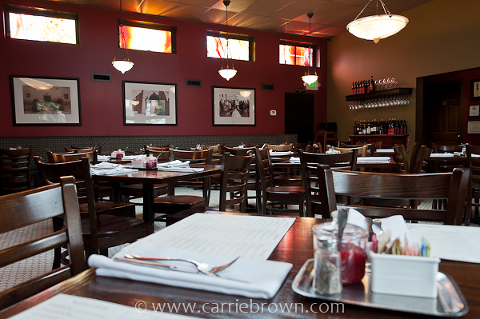 I was chomping at the bit outside the door at 8:59 am.  I knew this was going to be good.  Really good.  It was also cold & drizzling.  Not the funnest weather to be waiting in. 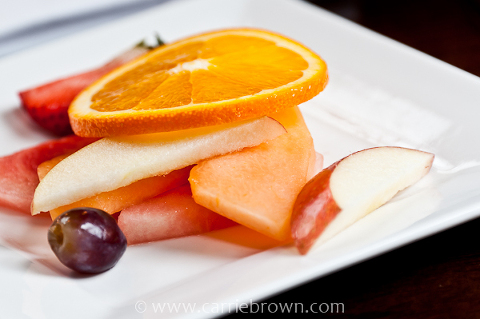 A spot of fresh fruit for the pregnant lady.  Almost made me want to be pregnant…<<JOKING>>. 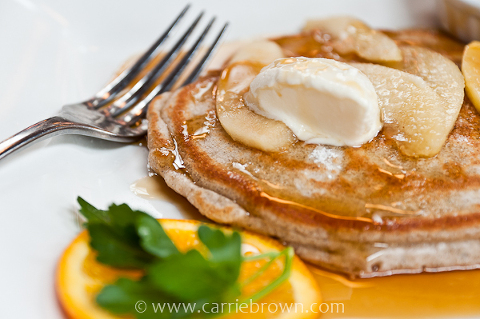 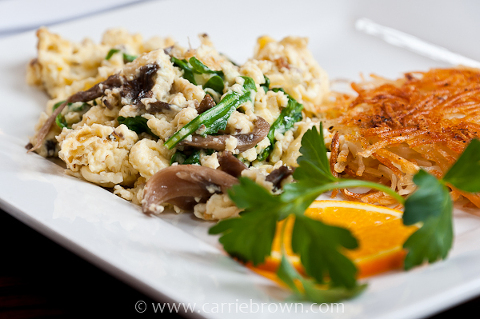 Wild Mushroom and Truffle Scramble topped with Fontina, arugula and white truffle oil. Served with Volterra hash browns.  Perfect pregnant lady food.  Life will be so much easier if Junior comes pre-equipped with a penchant for wild mushrooms and truffle oil. 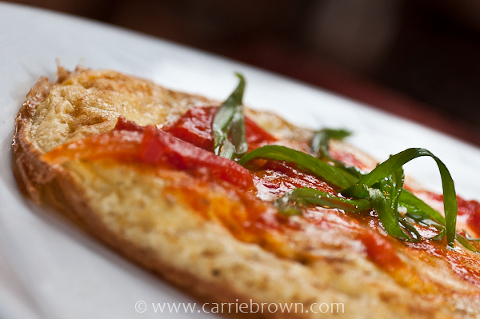 Lamb Sausage and Sweet Pepper Fritatta with Pecorino Pepato and green onion curls. Served with Volterra hash browns.  Totally fit for a Father-to-be.  And while this may not look like The. Most. Exciting. dish in the world, there were hidden treasures inside.  Lamb sausage.  Mmmmmm. 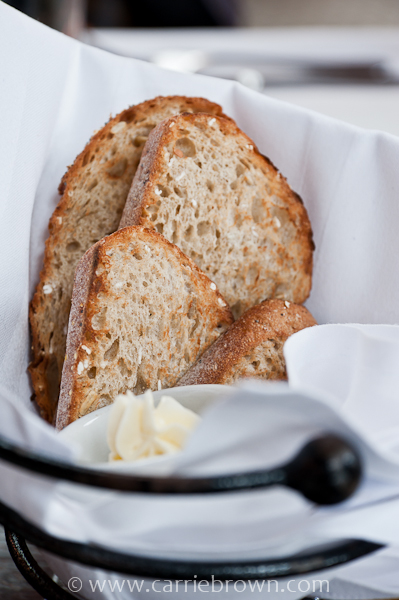 Even the bread is pretty.  And delicious. 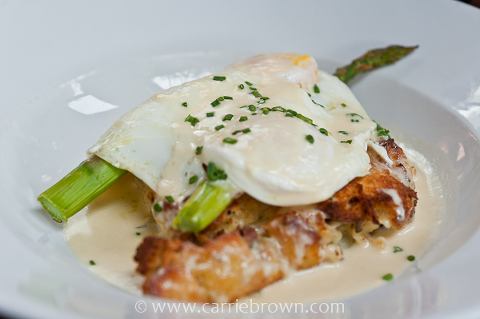 Milano! Milano! Savory herb bread pudding topped with 2 eggs any style, asparagus tips and smoked Gouda cream.  Yes, you read that right.  Bread Pudding with smoked Gouda cream.  Heaven have mercy upon my soul.  I want to assure you – those egg yolks were at just the right stage of runny to seep slowly into all those bready nooks & crannies below.  My only vaguely negative observation – that bread pudding was dense, man. 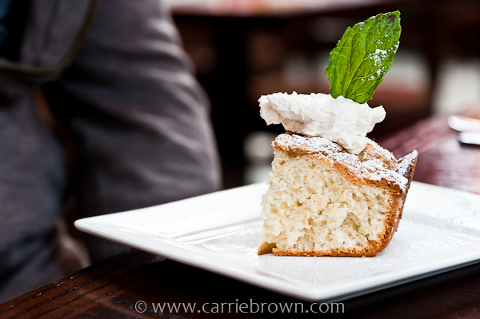 Coffee Cake.  Which Father-to-be gladly got a box for.  TOO. MUCH. FOOD. 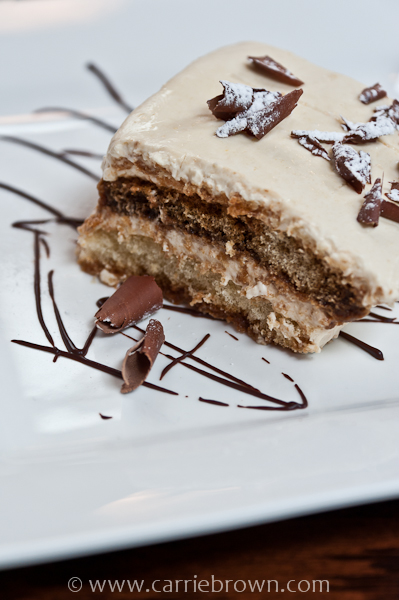 Tiramisu, which I happily hoovered up single-handedly.  Light, soft cake with the perfect balance of cream, & just enough booze to know it was there without feeling a kick.  One great version of an Italian classic, brilliantly executed. And that 3 course wonder brunch was just $15 a head.  FIFTEEN BUCKS!  This is why we love Dine Around Seattle.  3 fantastic plates of food (each) for the cost of 3 fancy cups of coffee.  Love.

After all that, I took Mr. & Mrs. Milligan on their very first foray down Ballard Avenue.  And you know what that means.  The Ballard Farmers Market.  I had warned Mr. Milligan ahead of time.  Mrs. Milligan was suitably enthused & energized by all the delicious foodstuffs in the market & all the arty, crafty, captivating stores on either side of it.  I pointed out that they might like to brunch at Bastille next Sunday and that they should plan to come early since lots of people like to brunch at Bastille on a Sunday.  I think they are planning on it.

We wandered down one side & up the other, sneaking a Jon Boy’s Caramel on the way.  Even when you’re full, there’s always room for a Jon Boy’s Caramel.  They have a new flavor – it was like liquorice.  I immediately wanted to eat a whole box.  On my own.  In a room with the door locked.

And then, then it happened.  Or rather, he happened: the Hama Hama Oyster Dude.  Tall, strong, dressed in fishermans gear & with his thick, unruly black hair restrained into a pony tail.  I immediately thought about how I might like to run my hands through that.  And those eyes.  Oh!  Those eyes.  The very color of the creamy, dreamy caramel I’d just eaten.  This was the second time in 14 minutes that I wanted to get a room.  OK, so maybe getting a room would be a touch premature, but I felt a sudden inclination to do things I haven’t done in a very long while.  Just like that.  In the middle of the street.  It quickly started to feel a little warmer inside my jacket than it had the minute before.

I realized after he sauntered over & introduced himself that if I looked in his eyes one more time, I’d likely turn into a jelly-legged, giggling school girl with flushed cheeks and short breath, and that I would probably start to say ridiculous things.  So instead, I focused intently on his oysters.  And strangely enough, although I’ve always claimed not to like them, I immediately wanted to eat oysters.  By the dozen.  I wondered what would happen if I did, given the state I was already in & given their famed status as aphrodisiacs.  I could find myself in serious trouble.  Yes, please.

So while I was absorbed with staring at his oysters, desperately trying to avoid looking at his eyes, he & Mr. Milligan were in a deep discussion about why his oysters are better than all the other dudes oysters.  Turns out, what the Hama Hama Oyster Dude doesn’t know about oysters, isn’t worth knowing.  And straight to the top of my bucket list went 1. Visit the Hama Hama Oyster Farm.

And then, in a flash, it was over and we moved on to the next stall, but really, my mind was still on the Hama Hama Oyster Dude’s oysters.  And that seemed like like a perfect thing to have on my mind, on a cold, drizzly Sunday in early March.

0 comments
« Many A Starry-Eyed Evening
We Talked About Bacon »