Lately, there’s been a lot of invites forthcoming.  Given my introverted nature, I can feel a bit overwhelmed when too many roll in.  Except when they involve cupcakes.  I don’t seem to have any reservations about accepting invitations to go eat cupcakes.  Who could possibly be overwhelmed by a cupcake?  They’re all pretty colors & swirly frosting.  So harmless & unassuming.  And *fabulous*. 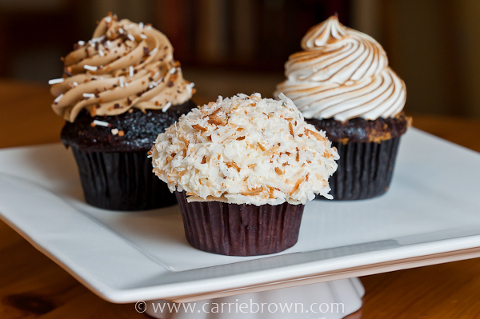 This past Sunday marked my second Cupcake VIP Event in 2 weeks.  Never one to turn down a free cupcake, or an opportunity to shoot stuff, I toddled off to Wallingford to participate in the launch of a new cupcake flavor at Trophy Cupcakes.  As I was speeding down the freeway, heading west towards a lovely patch of blue sky, I wondered if launching a new cupcake was anything like launching a ship.  Would there be champagne? Perhaps a posh lady in a fancy hat hurling a glass bubbly bottle tied with ribbon?  Maybe not.  That can get very messy.

A while back Trophy Cupcakes threw a competition out there, to see just how creative the closet bakers in Western Washington are.  Entries for new cupcake flavors flooded in.  A winner was chosen and a new Trophy Cupcake was baked.  Enter Deanna Morauski – B&B owner extraordinaire over at The Old Hen in North Bend.  Deanna had had a busy {winning!} week – the Tuesday before the Cupcake Launch she appeared on New Day Northwest in Seattle for winning the Girl Scouts Happy 100th Birthday Recipe Contest.  Her recipe?  Savannah Smiles Frozen Lemonade Tarts.  This girl’s been creating (and winning!) left and right.  Couldn’t have happened to a nicer, more talented gal.  Deanna has also been care-taking my heart-shaped, loose-bottomed, fluted tart tin for over a year.  There is nothing that this chick won’t do for her friends. 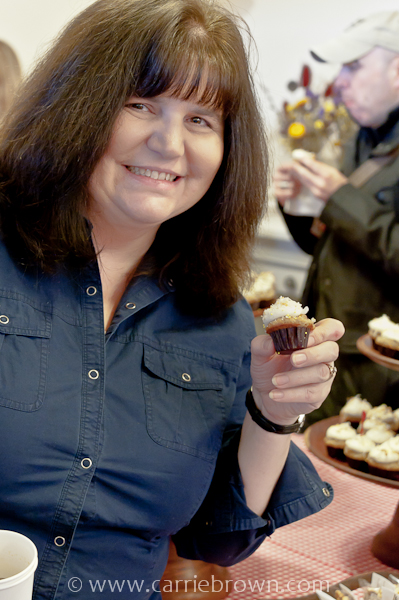 When you create a new cupcake, you have to launch it in style.  Turns out Jennifer Shea – Trophy Cupcakes owner – knows how to do that splendidly.  Along with Mobile Food Rodeo, Seattle Met magazine & Google Places, plus hundreds of Deanna’s baby “Tropical Stampede” Cupcakes all swanning around The Wallingford Center, this was one sweet party. 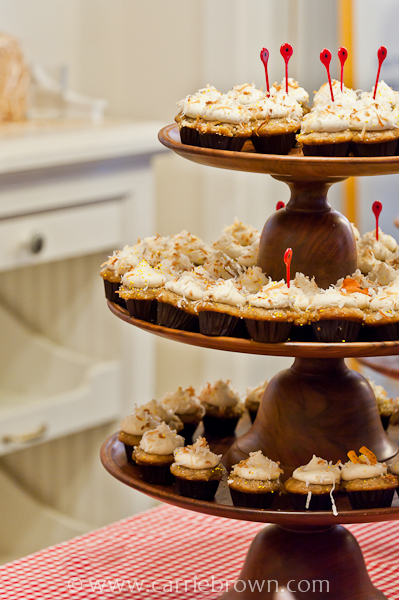 With a Hummingbird Cake base, studded with macadamia nuts & white chocolate chips, Deanna’s cupcakes were oh-so-moist & flavorful, with a fresh, juicy frosting that reminded me whole-heartedly of the Tropics.  To be reminded of sunshine, warm sand and pineapples on a dreary March day in Seattle was pretty darned welcome.

I ate cupcakes.  I met some fun new foodies.  Hi, Jessica!  Hi, Marisa!  I got to meet the mind behind Trophy Cupcakes.  And best of all I was able to cheer & clap as my friend took center stage as the creator of  Trophy’s new cupcake flavor.  What great afternoons are made of. 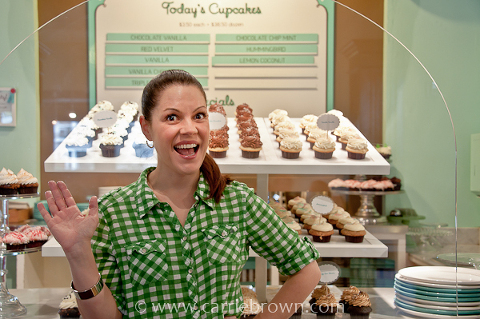 Before I headed homeward, the lovely Jennifer “Goddess of Cupcakes” Shea took a few minutes to guide me around her Cupcakerie – and I promptly bought 6 to take home. 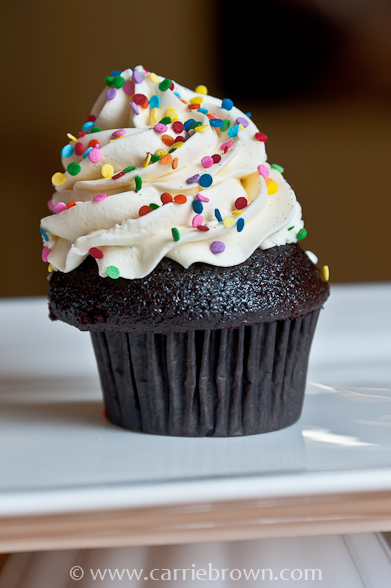 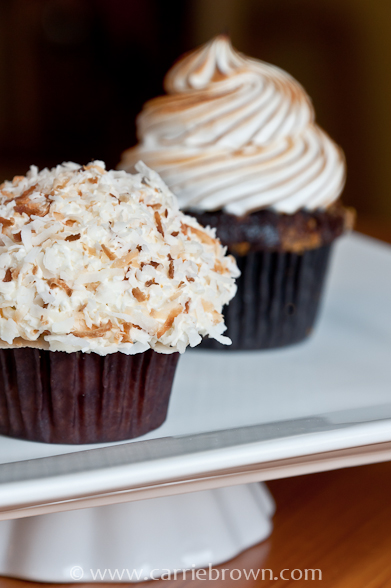 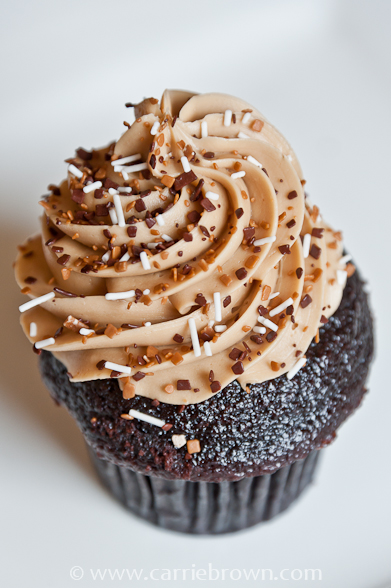 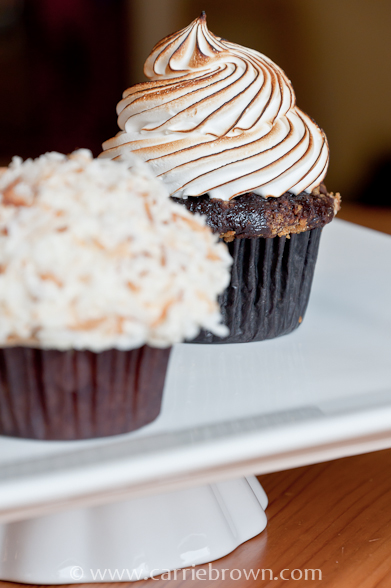 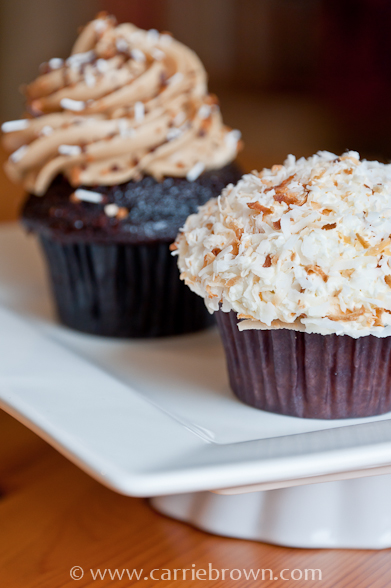 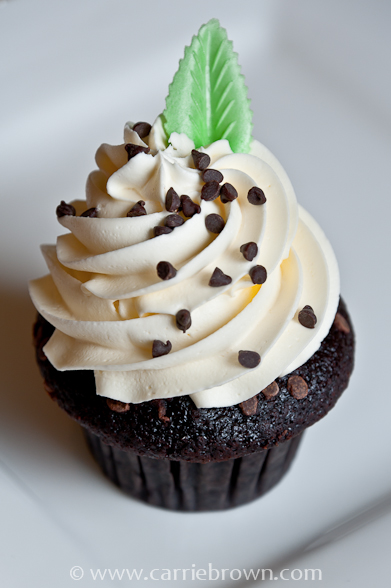 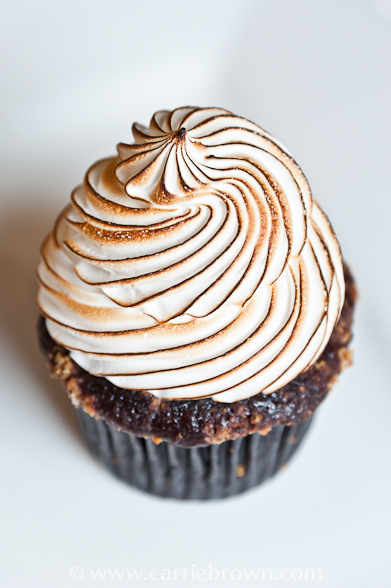 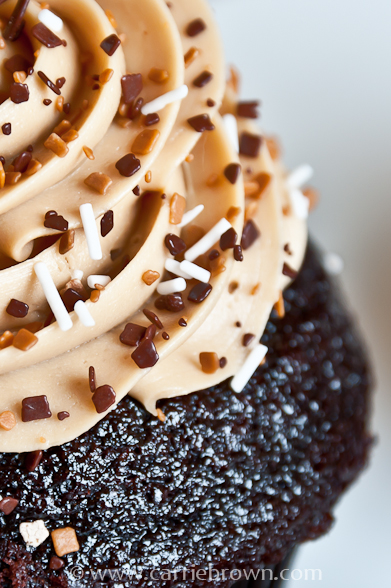 After all, it was the day before Sam’s 10th birthday, and every almost-10-year-old needs fabulous cupcakes for dessert.  I ate the Chocolate Mocha Cupcake.  I have never wished that I could have my cake and eat it more than I did after I ate that particular cupcake.  Except for maybe the Lemon Cupcake I had back last summer.

Oh happy, happy, Sunday.  Oh, and I can confirm that launching a cupcake is absolutely nothing like launching a ship.