Half Moon Bay and The Painted Ladies

While I was in San Francisco the other week, I decided that I needed to go to Half Moon Bay.  Mainly because the last time I was in San Francisco, in August 2010, I was on a shooting assignment for a client and only managed to swing through Half Moon Bay for 10 minutes after the sun had set.  I remember it seemed terribly cute, but that everything was closed.  I vowed that I’d be back – in the daylight, and when I had no other pressing deadlines to meet.

Monday seemed like a perfect day to go to Half Moon Bay.  When I woke up I had absolutely not one deadline in sight.  Of course, I had to have breakfast first.  And then I had to have pastries.  There couldn’t possibly be a trip to Half Moon Bay unless it was fueled by pastries.  So my day started at Brenda’s French Soul Food in the Civic Center & then I moseyed on west over to La Boulange, possibly one of the most popular French patisseries in San Francisco. 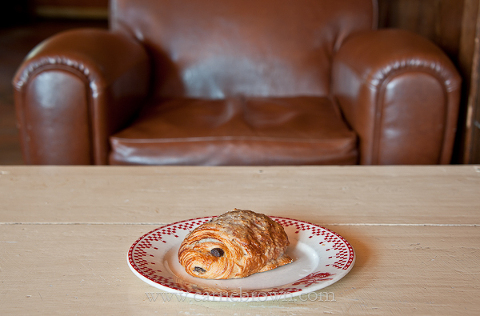 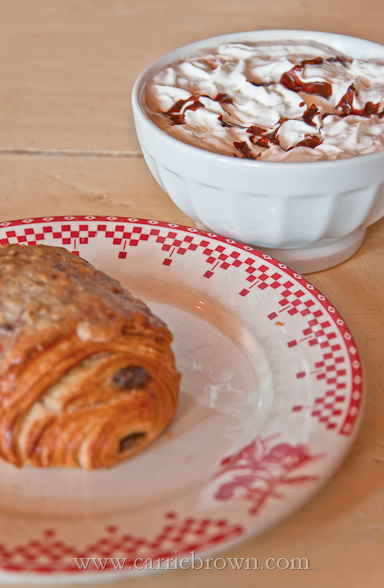 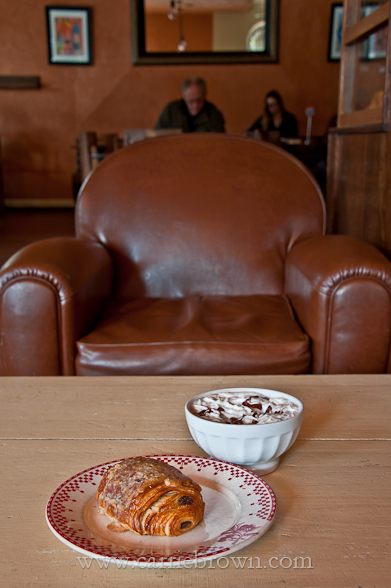 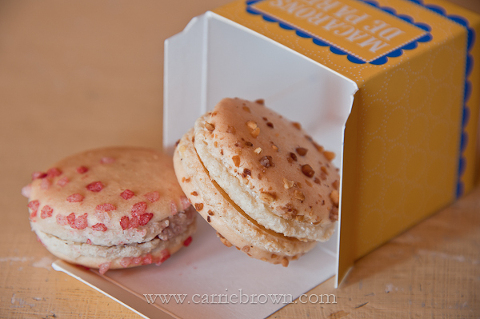 The ambiance was all that and {at least} 10 croissants.  Everything a neighborhood, corner patisserie should be.  Shabby chic coziness along with casefuls of glistening jewels of pastries and croissanterie.  I could hang out at La Boulange for hours.  The croissants, though, were disappointing.  They had great flavor, but the texture was doughy and not fall-apart flaky.  The Hot Chocolate was *way* too sweet and not a whole lot of chocolatey.  The macarons were delicious, the cherry one particularly so with its middle of gooey cherry jam.  They were up there with Honore in the macaron department.  They were certainly the prettiest macarons I’ve ever laid my peepers on.  La Boulange was remarkably well-priced.  That vat of Hot Chocolate was $2.40.  The croissant $2.75 and the macarons $3.75 for two.  Thems really good prices in a *very* spendy town.  Despite so-so croissants & hot chocolate, I’d definitely return to while away a few more hours in that leather chair.  Maybe with a book, or my trusty laptop.  I can see a fair few macarons slipping down the hatch, and it would be good to take a few other pastries for a test drive.

I had to drag myself out of that squishy leather chair in the window.  The sunshine helped with that.  How could I stay inside on such a gloriously, blue, sunshiny day?

After a tranquil drive through Golden Gardens, I hit the edge.  Because it was just time to see the ocean.  I could have hung out on this bench for hours, too. 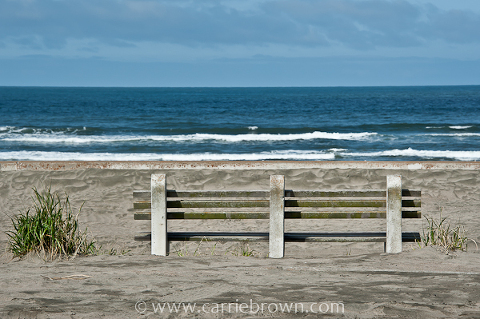 I turned south on Highway 1, and went sailing off down the coast road.

And a very pretty coast road it is, too. 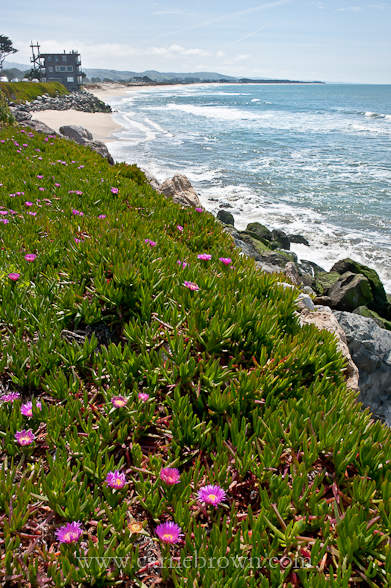 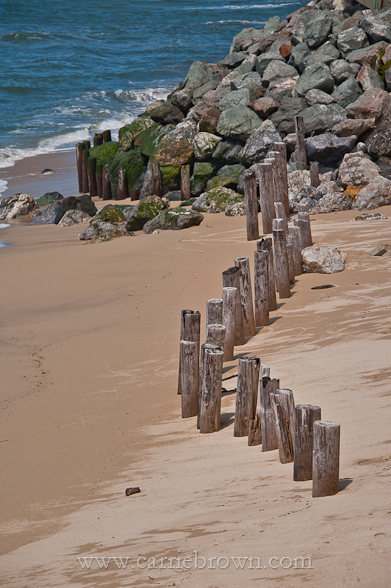 Downtown Half Moon Bay is equally delightful.  They are not afraid of color in this adorable seaside village.  Half Moon Bay is beautiful.  And full of crazy people.  Seems like a perfect place for me to retire to.  I’ll bear that in mind when it gets to that time. 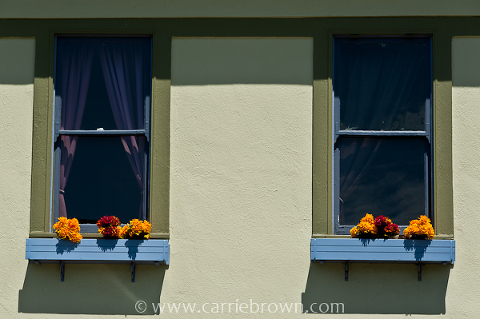 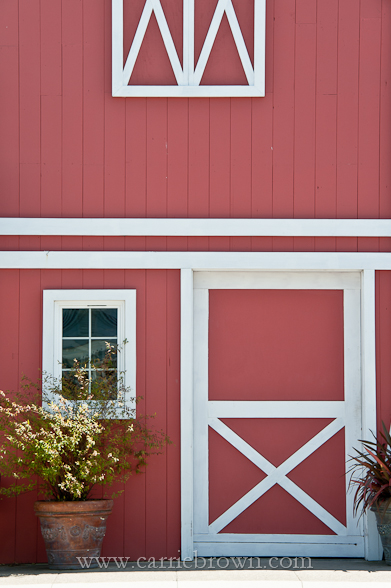 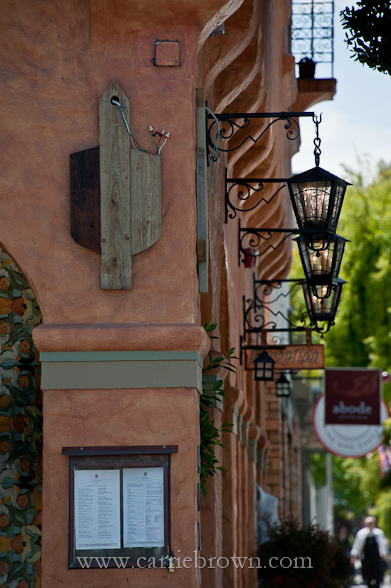 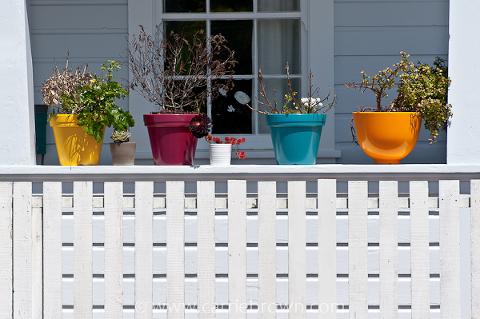 And then, then there were the poppies.  Poppy nirvana can be found on the way to Half Moon Bay.  California Poppies – they just make me happy. 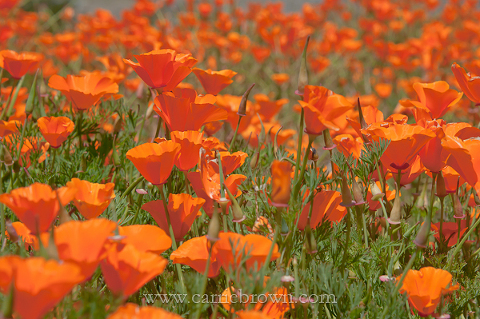 Driving back into San Francisco I got a bit lost.  Completely lost, if truth be told.  I love that I didn’t give a hoot.  Really, San Francisco is easy to get around – because it’s hilly, with a million viewpoints, and there are landmarks everywhere.  And because 3/4 of it is surrounded by water – so you can just drive until you reach the edge, or drive until you see a landmark or just go to the top of a hill.  And then you’re not lost anymore.

Secretly, I really liked being lost and it not mattering.  The thought that if I didn’t know where I was, then no one else did either.  And that, that was quite delicious.  Plus, it didn’t matter how long I stayed lost.  There was no deadline to meet, no people to be late for, no time that I had to be anywhere else.  I just drove lost with not a care in the world, and maybe because I was so unconcerned, and because I just knew deep down inside that I wouldn’t stay lost, suddenly, I knew where I was again.  I never stay lost for long.

Last time I was in San Francisco, the Painted Ladies were not on my list of shoot sites, so I made a mental note to swing by them on this trip.  I love the architecture in Fog City.  Every house is unique, and yet collectively they have a style that makes San Francisco all its own.  If you’re looking for “cookie cutter”, you won’t find it here. 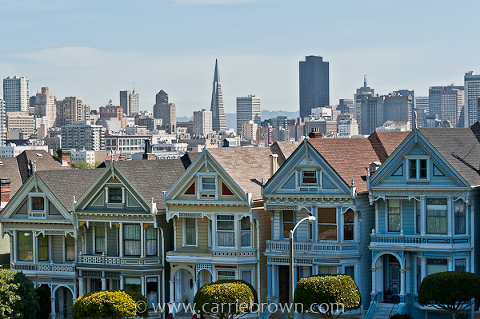 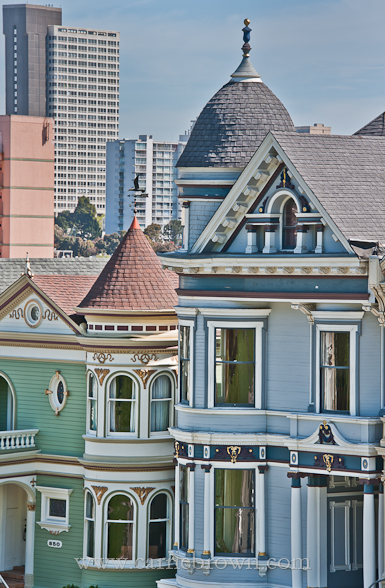 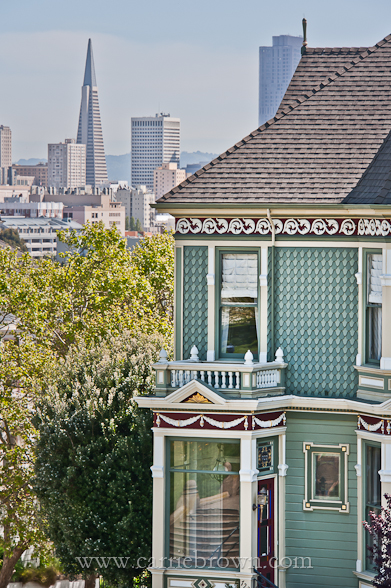 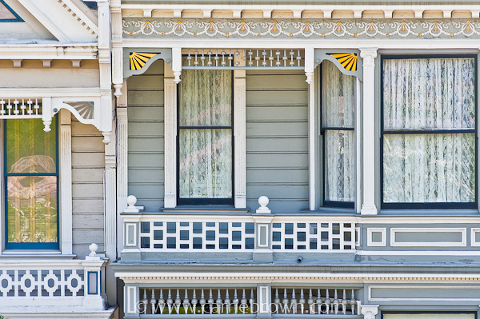 Alamo Square is a huge, green, hilly park which The Painted Ladies face, with the top of the hill graciously providing a most perfect vantage point of the stunning Victorian houses with the downtown cityscape in the background.  Because sometimes you just have to take the iconic picture, just because you were there.

I fell in love with the houses in San Francisco.  I could totally live there.  Despite the soft water.  Soft water = seriously fluffy hair.  When I mention that my hair was fluffy, what I really mean is there was so much fluffage going on that even two hair elastics & a baseball cap combined couldn’t undermine its enthusiasm for fluffing out all over the place.  Repeatedly.  Yes.  That’s what I really mean.

After hanging out with the ladies on Alamo Square, I determined that a trip to the beach would make a rather fitting end to my beautiful day.  Either that or I was already pining to the see the ocean for the third time today.  I headed off to a bluff high above Baker Beach where I thought I might snag a {yes, yet another} shot of The Bridge, as well as get to gaze out over the ocean.

What I found was a spot so beautiful I never wanted to leave. 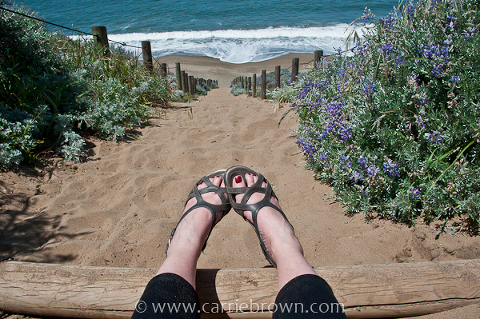 And a fence that I wanted to sleep next to.  (I restrained myself.)

But oh!  What a happy, happy San Francisco Day!

1 comment
« There Were Some Breakfasts Involved
It’s All Just Thermodynamics, Right? »