There’s this salad.   I made it up a long time ago.  It’s been an important part of my life for so long now that I don’t recall whether I first made it this side of the pond or the other, but I know I’ve made it at least a hundred times.  And I know that I enjoyed it as much the 100th time as I did the 1st.  I can’t imagine life without this salad.  If I had to chose one salad as a favorite, this would – for sure – be it.

I made this salad countless times when I lived in Spokane, where it’s hotter than Hades all summer long, and a cool, crisp, fresh salad can revive you like nothing else.  I made it for countless friends when they came over for dinner.  Everyone swooned.

It was my Canadian friend Kevin’s favorite salad too.  I remember us eating it in Canmore one Christmas, after a day shooting in the snow, and moose-spotting.  6 moose!  I mean, SIX MOOSE!!!!  Do you know how intoxicatingly exciting that was for an English girl who’d only seen moose in pictures before??  Worth celebrating with a splendid salad right there.  We ate this salad in the shadow of The Three Sisters.

I remember us eating it in Seattle several times.  We ate it after a long day painting the walls of the Beach House baby blue and mint green.  OK yes, you’re right.  Kevin painted and I supplied refreshments every hour.  We ate it after a crazy-long day-trip around the Olympic Peninsula; because who knew that the Olympic Peninsula was quite that enormous?  We ate it on a picnic half-way up the side of Mount Rainier.  That was a spectacular day – blue, blue sky dotted with fluffy white clouds floating aimlessly past the magnificent dome of Washington’s largest volcano.

Yes, I’ve eaten a lot of this salad in my time.  We’ve been through a lot together. 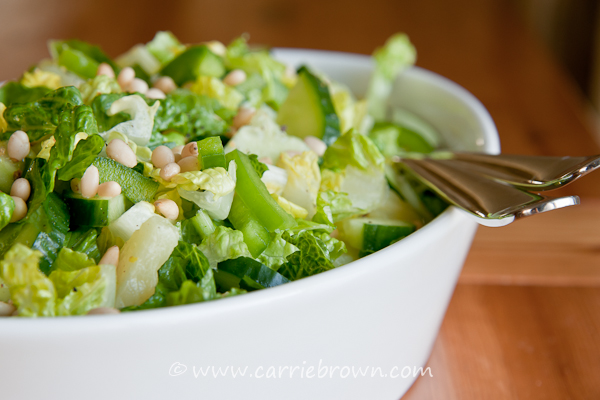 So when my own personal Geek Squad turned up in late March to set up Command Central in my living room for The Big Move from one domain to another, I knew I had to make my favorite salad to keep everyone fueled up and on track. I am pretty sure that it jumped straight to the top of the Geek Squad’s favorite salads list, too.

I love the crunch of the crisp Romaine and green peppers, the cooling slices of English cucumber, the sweet, juicy pineapple; the pine nuts adding their distinctive flavor and creamy texture to the bright and lively greenery.  Those pine nuts can be spendy little suckers.  Luckily you don’t need a huge amount to lift this salad from ordinary to extraordinary. 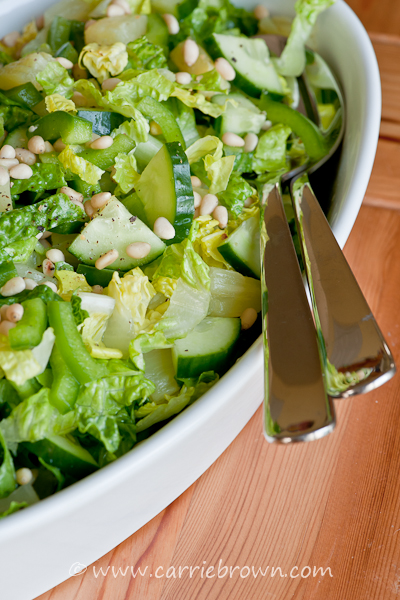 You can top this with your favorite dressing, or no dressing at all.  Most often I dress this salad with Brianna’s Poppy-seed Dressing.  I highly recommend you try them together.  It’s a match made in heaven, frankly.

Serves 4 as a side salad to a main dish.

Serves 2 as a main dish salad with a lean protein such as grilled salmon.