The stork is making a delivery to the Milligan household this weekend.  At least, Mrs. Milligan is sure hoping so.  She was hoping the stork would come early – like 2 weeks ago early – but Baby Milligan is clearly way too cosy to make his appearance ahead of schedule.

We needed to have one last pre-Baby Brunch before the Milligan home was turned entirely upside-down by the small human currently nestled under Mrs. Milligan’s always-stylish attire.  Mrs. Milligan would not have appreciated me shooting her in her current condition – beautiful though she is – so instead I shot Mr. Milligan enjoying a lovely cappuccino.  He does love his cappuccino, our Mr. Millligan. 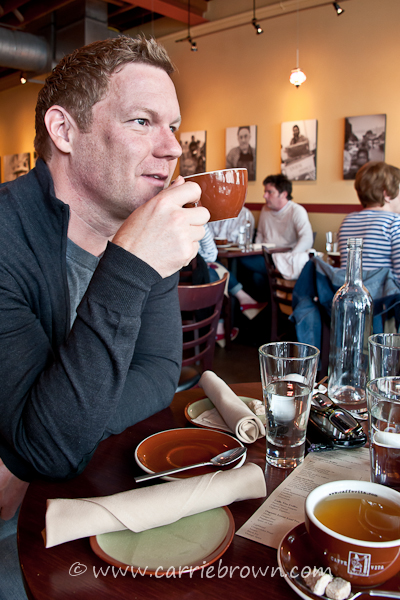 I picked The Golden Beetle in Ballard for our last pre-Baby hoorah because:

We had a grand old time sitting in The Golden Beetle, supping on our coffees and peppermint teas, and demolishing what between us amounted to a fairly large pile of food.  Mrs. Milligan downed a dish of Baked Eggs.  I plumped for the Eggs Mornay, which turned out to be Eggs Benedict.  Mr. Milligan, in a sudden departure from his usual orderly behavior, picked a bunch of sides off the menu and called it good.  The hands-down star of the show were the potatoes.  Luckily for Mrs. Milligan and I, Mr. Milligan graciously shared his potato prize.  Oh goodness me.  Cubed and then roasted until they had a thick, golden crust surrounding a soft, fluffy middle, these puppies are potatoes at their finest.  If you’re living a SANE* lifestyle these are worth taking a short diversion for.  Hey, if you’re going to go inSANE* for an hour it should be on something fantastic, right? 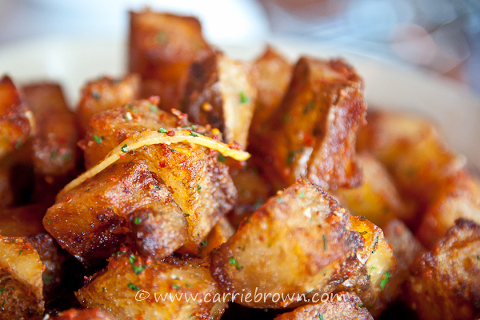 There was bread and honey. 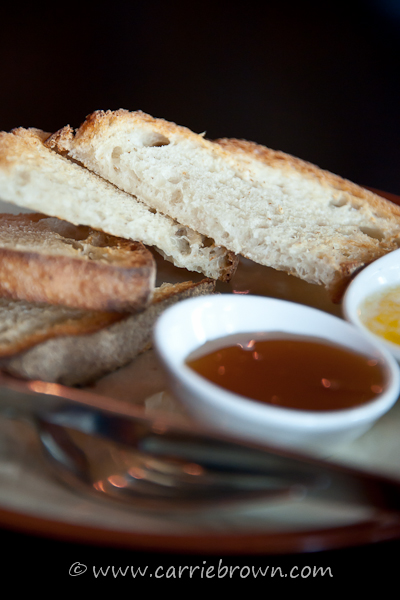 There was bacon.  You just knew there was going to be bacon. 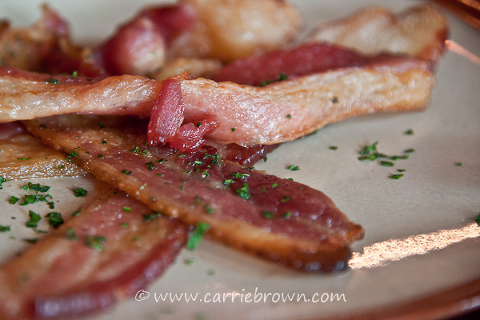 And there were lots of eggs.  Baked Eggs.  Poached Eggs.  Eggs Mornay.  We love eggs.

The Baked Eggs came with spinach, bacon and harissa ($10). 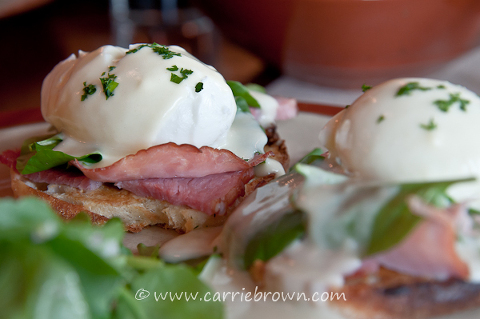 The Eggs Mornay came with swiss cheese sauce, ham and poached eggs ($11).  It made a lovely change to have a thin piece of good bread underneath the protein instead of a thick English muffin. 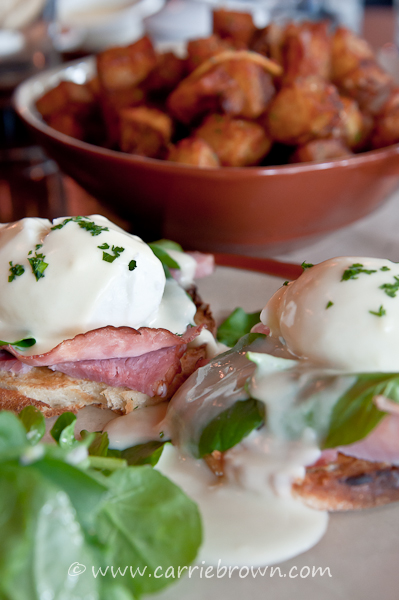 Served up as it was with a tender green salad, it made for a pretty darn SANE* dish.  I was happy to trade perfection for a couple bites of toasty bread, knowing that all week long I’d eaten more spinach than most people eat in 3 months. 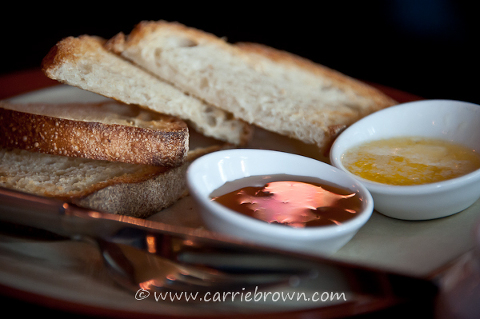 There’s Mr. Milligan’s bread again.  The light was so beautiful I couldn’t resist shooting it more times than was entirely necessary.  PS. They melted the butter.  It’s just so much easier to spread that way. 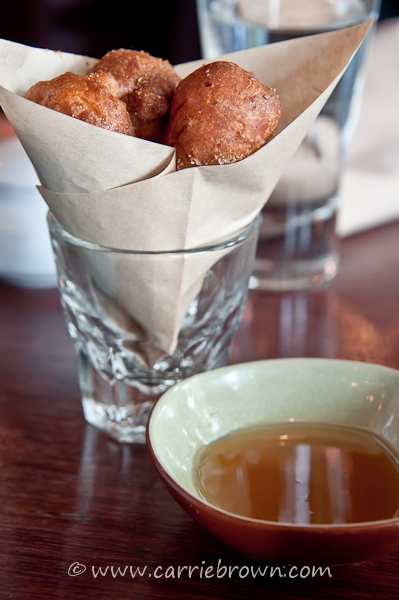 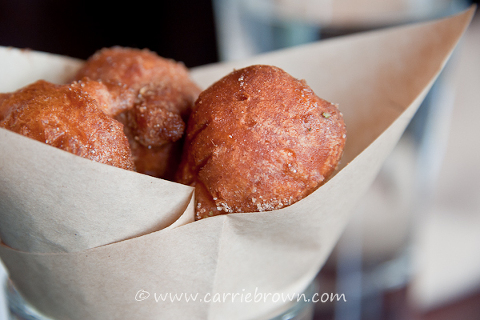 They were little balls of spicy, doughiness.  2 each was enough.

The service was slow and easy.  There was lots of time to gab between drinks and plates of food, which is a really good thing when you’re a {very} pregnant lady whose heir apparent might just decide they wanted out at any moment.  It was a quiet, tasty, leisurely brunch.  The menu isn’t large, but there was plenty there to keep our mouths happily occupied.  It also wasn’t packed – not because the food isn’t good – just because it’s one of Ballard’s lesser known gems.  Definitely worth a trip.

After we were done at The Golden Beetle we quickly determined that a trip to Honore Bakery was in order because:

We hit Honore around 12:30 so the line was relatively short.  Mrs. Milligan oohed and ahhed over the glass case filled with patisserie clearly made by the gods.  I recommended the Lemon Meringue Tart.  And macarons.  We waited patiently, and then scurried out clutching our respective little brown boxes filled with delicious pastries.  I only had macarons.  I decided that 6 macarons was exactly the right number for a Sunday afternoon tea sitting on the blanket on the lawn under my lilac tree. 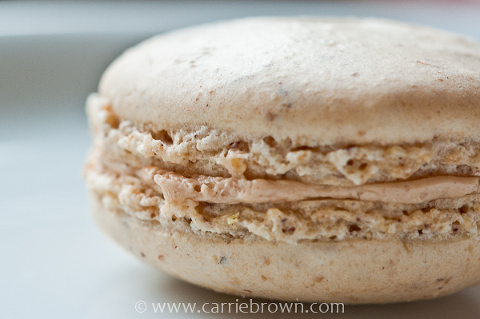 It became very obvious that Mrs. Milligan was utterly impressed when, as they passed me in their car driving away from Honore, she leaned out her open window waving a half-eaten caramel salted macaron, and screamed, “They’re amazing!!”, while Mr. Milligan silently offered up a prayer that this heightened state of euphoria would not induce Baby Milligan’s arrival until they had at least reached home.

Addendum: they made it home without a birthing incident.  Baby Milligan is scheduled to arrive in the next 48 hours.  Hoorah!