In my last post I was totally messed up.  I am still in a bit of a dither.  Nothing terrible happened; nothing really extraordinary, either.  We had a holiday.  The Fourth of July.  Independence Day.  It was all flags and fireworks and apple pie.  It’s a tricky holiday for a Brit; especially one who is also an American.  My first 4th July as an American was a huge celebration – friends and a fabulous bbq, a tye-dyed t-shirt that everyone signed, and red, white and blue desserts all over the show.  It was awesome.  For the last few July 4ths I’ve taken to celebrating my own personal independence from a whole bunch of stuff that it’s probably best I don’t identify.  Suffice it to say that I rejoice on Independence Day.  What sent me into a tailspin this year was that July 4th was slap bang in the middle of the week.

Tuesday, also known as The Day Before The Holiday, was an interesting day.  Trader Joe’s HAD NO BACON.  I forgot the eggs, paid $3.39 for gas, and recorded a podcast that made me laugh so hard I stopped wanting to smack someone.  Plus, someone – although not the same someone that I spent most of the day wanting to smack – used the word ‘slender’ in connection with my legs.  Secretly, that may have been my favorite part of the day.  That and sleeping with a pillow and not caring who knew.

Independence Day itself got off to a bit of a dodgy start; and just to be clear – it was not the pillow’s fault.  I had a spot of bother trying to get out of bed. 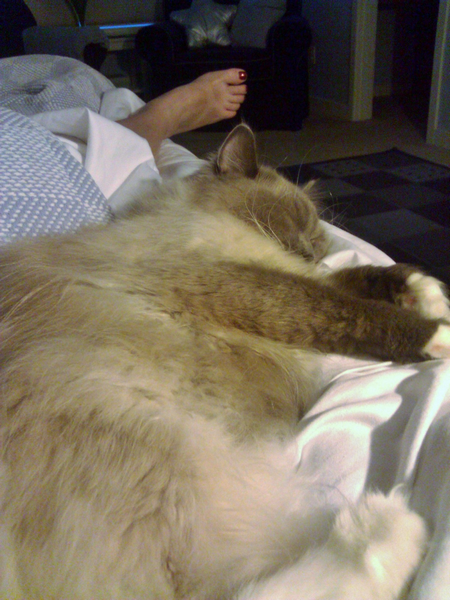 Once I had extricated myself from all the fluff and tangle of sheets, I was off to pull weeds in the yard.  Because IT WAS NOT RAINING.  If you have lived in Seattle for the last 3 months you will appreciate how heart-stoppingly exciting that last sentence was.  And how pulling weeds could be so appealing.  There I was – at 7:15 am – pulling weeds with the glee of a five-year-old let loose in a ball pit.  By 7:28 I had worked up quite a glow.  Off came the sweater.  Hello, Independence Day.  This was the first time I had been outside wearing anything without sleeves in over 21 years.  True story.

Mini-Me and The Hubs were due to come over with a big bucket of bird in the early evening.  My contribution?  To bring some dietary sanity to the proceedings.  Which, by the end of the evening, became known as How To Eat KFC And Lose Weight.  If you adore KFC, go ahead and have it – just pass on their sides and add a couple of your own super sane salads.  No mayonnaise required.  Oh, and don’t do KFC every, week, or even month.  High days and holidays only.

The period of time between baring my shoulders to the world and two buckets of chicken showing up at my door involved:

1. A drive to Issy because watercress and frissee are “too unusual” in my little town.

3. Filling my 96 gallon yard waste thingy with weeds.  My mind felt clean too.

4. Enjoying a lovely spot of sunbathing on the blanket on the lawn.  Thanks, Mother Nature!

5. Being desperate for a Dr. Pepper; and resisting the urge.

It also involved playing with my mandoline for the second time, and rustling up a twist on coleslaw that had me wishing I’d started this whole Friday Night Dinner thing about 20 years ago.  For anyone keeping track of days here, the Friday Night Dinner got moved to Wednesday, a) Because Wednesday was Independence Day and b) Because Mini-Me and The Hubs were heading off on Friday for some romantic tête-à-tête in Friday Harbor.  Like married people do.  At least the ones that want to stay married. 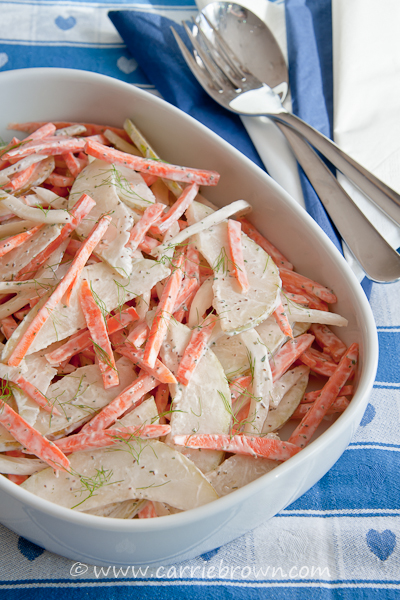 I. LOVE. THIS. SLAW.  Mini-Me and The Hubs loved it too.  The Hubs was wildly excited for coleslaw with no mayonnaise.  Mini-Me was just excited.  She told me the day after that it had made her crave pears.  Craving pears can never be a bad thing.  I just craved the whole thing.  The dressing was a revelation.  Who knew celery seeds could ever be the star of any show?  Plus. Greek yogurt instead of mayo, and no sweetener.  I won’t be waiting for next July 4th before I’ll be making this again.

Our Independence Day feast comprised copious pieces of fresh, juicy KFC, Summer Pear Slaw and Orange Hazelnut Frisée, on a blanket on the lawn while watching fireworks.  It was the bomb; and some of the fireworks sounded like them.