Lovely, lovely, patient people.  I have no idea where the time goes, sometimes.  I only believe that it’s been 3 weeks since I wrote to you in this space because when I checked the last post date it said September 14th.  And post dates don’t lie.  It’s all been so busy around here I completely lost track of time.  It wasn’t that I didn’t want to be here – I love hanging out with you; it’s just that I’ve been busy.  Busy with good stuff.  Stuff I think you’ll love.  Busy with a book, or two – for you.   There was my brain to consider as well, in all of it’s bright-shiny-object-syndrome glory.  Plus life with all it’s never-ending demands – a car that decided to overheat on the freeway one morning, a lawn that screamed to be mown twice a week, a checkbook to balance, clothes to repeatedly launder, trips to Trader Joe’s so I could make enough ice cream to fill a book; one of these days I’ll train the “kids” to load the dishwasher, or at least take the trash out.  Our lovely friend, Nancy, became The Roomie for 5 fun weeks, Mr. McHenry joined the gang and required extensive orientation (aka play time) and oh, I nearly forgot the day job.  But even so, I’ve been gone too long. Forgive me?

To make up for it in some small way, I made you something special – Lemon Mascarpone Tarts.  Yes there’s a story – because no one just randomly makes up fancy tartlets in their sleep.  There’s always a train of thought to these things, however disconnected it may seem to everyone else.

When I was working as the Head Pastry Chef at a French Patisserie in Perth – over in the great land of Oz – we used to make this tart that my team and I affectionately called Posh Pie.  It was a Pâte Sucrée (rich and buttery) pastry case filled with a mixture of mascarpone cheese and heavy (double) cream, topped with prunes that had been soaked in brandy, and then finished off with a beautiful glaze.  That was one epic pie, let me tell you.  I have often thought about Posh Pie since those days, but for reasons which are entirely unfathomable to me, I never made it again after I left Maison Perry.

I got around to thinking about Posh Pie a few  months back, and thought how fun it would be to make a keto version.  On reflection I decided that maybe prunes weren’t the best thing for you though, especially ones that had been soaked in brandy for 2 weeks.  And the whole mascarpone-heavy-cream thing didn’t seem quite right, either.  Ultimately, what I came up with is absolutely nothing like Posh Pie, but I thought I’d share where my mind started out. 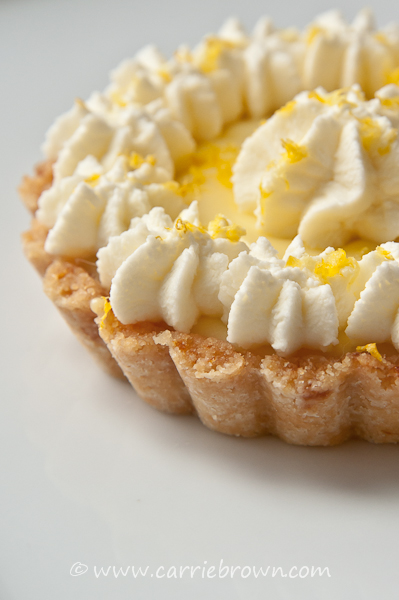 I decided, the morning after I made these Lemon Shortbread Cookies, that they would make a perfectly fine substitute for a tart case.  Then, since my tartlet already had this whole lemony base going on, I couldn’t think of anything better to fill it with than some fantastically lemony Lemon Curd.  As a pretty piped topping I was going to go with simple whipped cream, but I determined that I should at least give a nod to the mascarpone part of the Posh Pie from my pastry-cheffing past.  A sprinkling of finely grated lemon zest and voila!  A spectacular tartlet that simply no one will believe is keto.  Except you and me.  It can be our little secret.

I wouldn’t recommend you eat these every day, or even every week.  I’d have them as a high-days-and-holidays treat – but it’s always good to have a truly memorable dessert recipe in your back pocket – for those times when you want to give the non-keto peeps at your table something super-special – without feeling like you have to compromise on your own eating choices.  I’ve given you this recipe ahead of the holidays so you can get prepared well in advance.  They are a little more complicated and time-consuming that most of my recipes.  Choosing a keto or low carb lifestyle doesn’t mean you can’t have fancy desserts, too.

Posh Pie it isn’t, but scrumptious keto it most certainly is!