You often tell me how much you love the stories and little asides that I add to my recipe posts and cookbooks.  It occurred to me though that I am feeling rather anxious about having abandoned you during my elongated absence from creating recipes.  To ease my anxiety I am going to focus on simply getting a bunch of recipes to you, and that means I’ll forego much of the writing until I feel like I have redeemed myself.  Besides which, you learned more about me in 2014 than you might ever have wanted to know.  Let’s just say I think I front-loaded all the writing this year.

That said, let’s get back to the cooking!

No Friday Night Dinner – or *SANE meal any day of the week – would be complete without a bunch of veggies heaped on the plate.  While I was mulling over what veggies to dish up with the Baked BBQ Chicken the other week, I decided to do a salad for speed, but I wanted it to feel warm and comforting, not cold and fresh.  A winter salad, if you will.  Spinach immediately popped into my mind, probably because it’s not a crispy, crunchy green.  It’s softer and floppier and feels warmer, even when it’s raw.  I also wanted something that wouldn’t compete with the SANE BBQ Sauce smothering the chicken.  With warm, mellow-flavored leaves as a starting point I pondered which foods evoke thoughts of colder months: pears, dried apricots, walnuts; and before I knew it I had a salad on my hands. 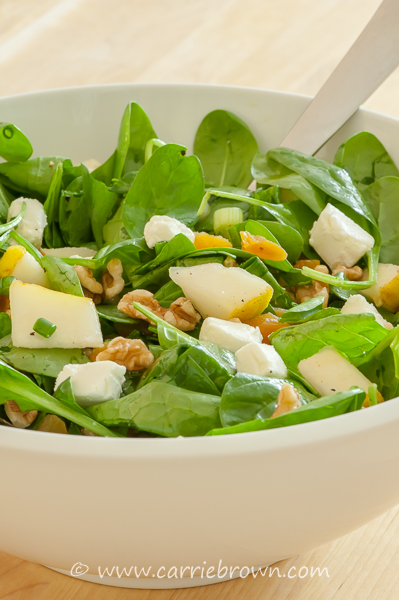 I whisked up a super simple dressing, added scallions (green onions) for a touch of ‘bite’, and finished it off with some goat cheese.  Food doesn’t have to be complicated to be delicious.  A good recipe and fresh, real-food ingredients and you’re there.

Wildman is a big fan of spinach salads, and this one was a winner for him.  He loved the soft, sweet pear pieces and the mild, creamy goat cheese, with a light dressing that was there but didn’t overpower any of the other flavors. 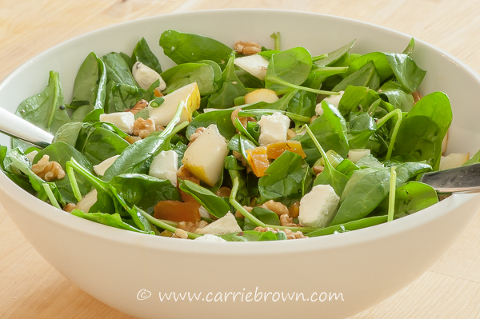