Look.  Yes.  I am fully aware that it is rushing towards the end of November and that for those of us in the northern hemisphere, BBQ season was over two months ago.  I am also aware that for our friends in the southern hemisphere, BBQ season has just started, and for everyone who lives closer to the middle, BBQ season is a year-long affair.  My point is, I am completely unrepentant about giving you a keto BBQ Sauce recipe in mid-November.  Not only I am completely unrepentant, I am way more excited than I probably should be about this recipe.  Here’s the thing: I’m British.  I didn’t grow up with BBQ as part of my national heritage.  Brits typically don’t have barbecue grills the size of small cars, nor ones that have the ability to cook an entire gourmet meal on them.

As I recall, my family got our small, round, charcoal-powered barbecue when I was around 16, and we really had no clue what we were supposed to do with it.  We were hopeless at lighting it, and it took forever to get hot enough to cook anything.  All we ever cooked on it were frozen hamburger patties.  Oh, wait, I think we did progress to chicken kebabs at some point, but our repertoire was exceedingly limited.  Plus, the whole barbecuing thing was more of a pain than anything else.  Net net – when I landed stateside just about 14 years ago I was not a barbecue girl, and I wouldn’t know good BBQ Sauce if it hit me on the head.  Americans, I soon learned, will merrily barbecue anything that stands still long enough, and grilling – as they refer to the act of cooking outside on a barbecue – is as simple as turning a gas tap and pushing start.  Americans grill at the drop of a hat, in all kinds of weather, and with a ton of glee.  Americans love their BBQ.

Given that Americans also know their BBQ Sauce – I’m surprised it’s not their national dish – it was with a pretty major amount of trepidation that I finally finished procrastinating, heeded all the requests in my inbox, and bit the BBQ Sauce bullet.  How do you make a KETO version of something you’ve never made before?  How do you make a KETO version when you don’t really know what it is you are recreating?  Not to be outsmarted by a bottle of deep reddish-brown, viscous liquid, I began thinking about how I was going to get the same result without using molasses (black treacle, lovely English readers) and / or dark brown sugar, both of which impart a depth of flavor, color, and body all their own.  While xylitol or erythritol can replace the sweet part of the equation, color and flavor not so much.

I mused for several days, letting ideas marinade in my mind while I focused on other things.  Molasses-y thoughts occupied my mind in the shower, at the traffic lights, and at 1 am on Thursday when Mr. McHenry bounced on my chest and I couldn’t get back to sleep again.  I wandered around PCC and Trader Joe’s looking for inspiration.  And then it hit me. You’ll never guess in a million years, so I’ll give you a clue: root beer extract. 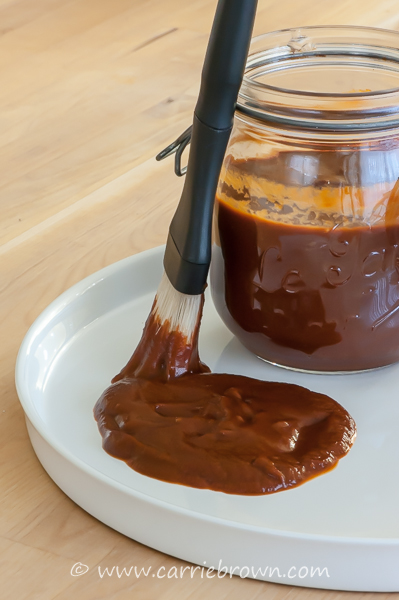 I also ventured into the world of Liquid Smoke to get some hickory going on.  I’d always imagined that Liquid Smoke must be some horribly processed bunch of laboratory chemicals, but turns out it’s real live smoke from smoldering wood, that’s been collected, cooled, and condensed into a liquid (at least the brand I bought was).  Who knew??  (Yes, friends from England, you can buy this at Amazon and other places online if you can’t find it in your local grocery store.)

I was terribly excited when I’d finished dabbling and had a jar of finished sauce sitting jauntily on the counter.  It tasted just like other insane BBQ sauces that I had tried since being stateside.  Nevertheless I was eager for Wildman to show up for The Friday Night Dinner so he could give me his bona fide all-American, BBQ-expert opinion.  When he arrived in the kitchen – the air still heavily scented with BBQ – he headed straight for the jar with a spoon.

Then I used the BBQ Sauce to rustle up Baked Barbecue Chicken.  I think you’ll love that too.  Wildman did.

I spent the rest of the evening and most of Saturday randomly yelling, “I made  KETO barbecue sauce! I made  KETO barbecue sauce!”  Because to me,  KETO BBQ Sauce is all kinds of exciting.  Not only that, but this is the first recipe I have created for you since March 7th.  To say that I am wildly enthusiastic to have my cooking mojo back is putting it mildly.  There were times when I wondered if I would ever cook again.

This BBQ Sauce is super simple to make and although it takes time to cook, the hands-on time is very short.  It’s really just assembly that gets simmered for 45 minutes. 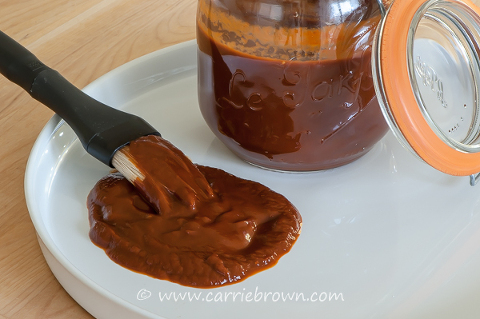 PS. If you are not in the US, I wouldn’t drive yourself mad looking for root beer extract. Yes, I believe it’s a better flavor and color (definitely color!) with it in it, but the world won’t end if you leave it out.  If you can get it – great, if not, enjoy it without.  This is the brand that I use.  I also used this brand for my Riveting Root Beer Ice Cream.

23 comments
« Get Yourself A Pedicure
Baked BBQ Chicken »