Goodness.  I got sucked into a black hole for a bit there, didn’t I?  The last 2½ months have been a particularly enjoyable and energetic black hole while I road-tripped all over Mother Earth.  Zooming round and round Washington, down into Oregon, and up into the Great White North, except it wasn’t white yet because it was only the end of October.  I’ve mostly been chasing volcanoes, seeing how many mountain passes I could romp over before the snow flies, and shooting stuff with a studly camera that’s been hopelessly underused this year.  I also met up with and enjoyed a keto meal with some of you.  Frankly, I’ve had a rip-roaring time, and it was sorely needed.

Somehow it’s now Thanksgiving and I must admit I’m glad to be home this week, in a kitty-filled house, with a steaming mug of Candy Cane Green Tea (Oh, Trader Joe’s not a day too soon did you get it back in the stores!), the dishwasher whirring ever-so-quietly in the background, a bowl of Cheesecake Ice Cream custard lolling in the fridge waiting for its 20 minutes of fame in the churner.  I am soaking up the silence, wallowing in my fat, fluffy slippers, with a hair-do that is channeling Pebbles.  And, while there is no one here to cook for today, nor was there yesterday or the day before that, I am pretty darn excited that for the first Thanksgiving in 8 years (EIGHT YEARS!) I am going to be sharing my turkey.

As evidenced by my post earlier this week, I am cooking again. And it feels mighty fine I have to tell you.

It started when a couple of Fridays ago I revisited my fiendish plan to inveigle unsuspecting friends over on a Friday night to eat dinner with me, and in the process unwittingly become taste-testers for a slew of delicious new keto recipes.  Just like that the Friday Night Dinners are back on!  Whoop!

Two Fridays ago I served up Sage and Onion Pork with Tarragon Green Beans, and Leek and Celery Stir-fry.  Then last Friday I whipped up Baked BBQ Chicken using keto BBQ Sauce.  Since I was deeply excited about the keto BBQ Sauce and just couldn’t wait to post it, I’m giving you the last Friday Night Dinner recipes first.  Let’s call it recipe developer’s license. 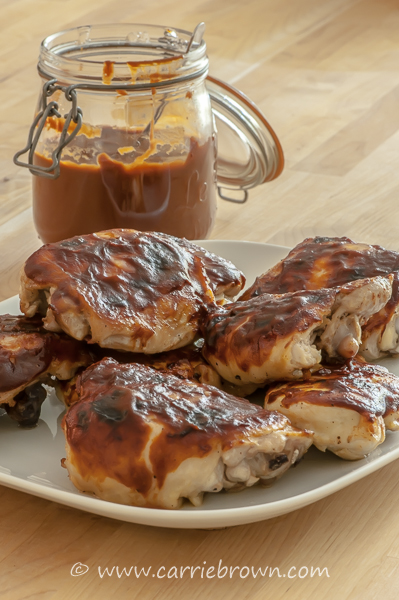 Mmmmmm.  Juicy, crisp chicken thighs slathered in BBQ Sauce.  Wildman *really* loved those thighs, and because he likes a lot of sauce he had extra on the side.  It’s keto, why not have an extra dollop on your plate?

Fast, no mess, and simple as can be.  Sling the chicken in marinade the night or morning before, toss them in the oven to bake, smother them in keto BBQ Sauce and finish them off under the broiler (grill).  Throw together a salad.  Dinner = done.

(NOTE: I also cooked two skinless chicken breasts using the exact same method to see how they fared.  Not to be recommended.  Significantly drier than the skin-on thighs.) 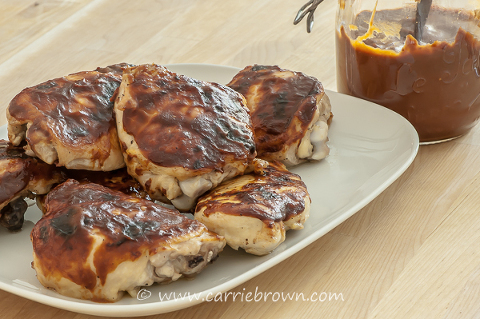