After the resounding success that was introducing Wildman to cauliflower, I felt it was worth the risk of pushing the food envelope a little bit further. Having previously declared his utter distaste for cabbage, and that he had certainly never purchased one, it seemed like an excellent next step in the vegetablization of Wildman. Let me just clarify that I am not suggesting we turn Wildman into a vegetable, rather that we turn him into a man that loves all things veggie. It’s going well so far. 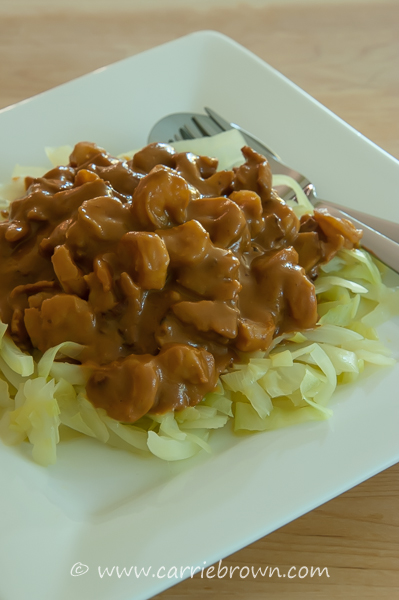 I wondered if I could lull Wildman into a false sense of security by making cabbage look like tagliatelle and spooning some delicious sauce all over it.  When you think about it, pasta really doesn’t have any flavor of it’s own, it just soaks up the flavor of whatever it’s with.  I wondered whether it would feel enough like eating pasta that he wouldn’t miss all the starch.

The idea for the sauce has been mulling around in my brain for several weeks.  I wanted to make use of the SANE BBQ Sauce in a new way, but I didn’t want it to be overpoweringly barbecue-y.  Originally I was going to do this with leftover turkey, but Wildman asked me for a new, fast, simple way to cook shrimp, and I do like to oblige where I can.

If you have the SANE BBQ Sauce already made, this dish is ridiculously fast and simple.  The braised cabbage is also so simple I hesitate to call it a recipe (up next!).  Cooking SANE does not need to be complicated or long-winded.  Truly.

The verdict: Wildman ate all his cabbage and announced that he loved it.  The sauce is super tasty and he didn’t miss the pasta in the slightest.  It was filling and comforting without the bloating and diabetes.  Winning! 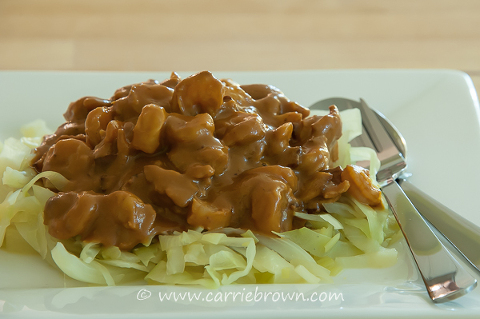 You can get the recipe for SANE BBQ Sauce here. Make a big old jar and keep it in the ‘fridge so you can whip up a fabulous dinner in a jiffy.