I had finally managed to escape from Lenox Hill Hospital with both kidneys intact.  I wish I could say the same for my dignity.   Anyway, I had been “upgraded” to the Westin Hotel on Times Square for the duration of my trip although it turns out, despite what you might imagine, that the Westin is tens of thousands of dollars cheaper per night than Lennox Hill Hospital!

I was SO ready for a big, fat decent breakfast…and with that in mind I headed straight off to Sarabeth’s on the south side of Central Park for what I hoped would be a glorious reintroduction to some great food.  I walked all the way from Times Square, which probably wasn’t the best idea I’ve ever had, having just left the hospital, but it felt like the exercise would do me good & the sunshine sure lifted my spirits.  It was already over 70 degrees by 7:30 am so I decided it would be lovely to sit outside at one of the sidewalk cafe tables & do some people watching while I ate.  The menu was disturbing.  There were so many things I wanted to eat and yet my mouth & my kidneys were in complete disagreement as to what they needed to eat. 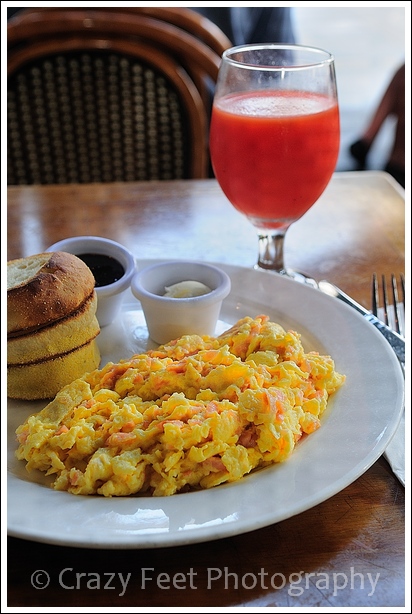 My kidney, however, deserved something other than an onslaught of carbs & my body needed some protein, so I finally settled on Sarabeth’s “Goldie Lox” – scrambled eggs with smoked salmon and cream cheese … $14.50…ouch!…but my, what an enormous plate of food that turned out to be!

I swear there were 6 eggs in that scramble.  They were also the creamiest scrambled eggs I had had in a long time.  The salmon was delicious and I was proteined-out in no time at all.  It came served with what the menu described as an English muffin.  Strangest lookin’ muffin I’ve ever seen.  Tasted good though.  I also ordered a Four Flowers Juice, which at $6.50 I figured had to be special.  It was billed as a special blend of orange, pineapple, pomegranate and banana, and I gotta tell ya, it wasn’t huge but it was good. 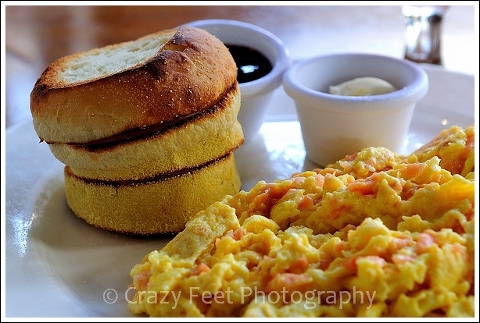 The strangest lookin' English muffin ever

It was a lovely breakfast.  A far cry from the one I’d had the last 5 mornings.  Sarabeth’s on Central Park South does also have the friendliest server in all Manhattan, and I left a note saying as much on my receipt.  I would highly recommend a trip to Sarabeth’s for breakfast.  Maybe it tasted better because I’d just downed hospital food for 5 days, but I have a suspicion that Sarabeth’s food would taste great every day.

After breakfast was done I wandered over to Strawberry Fields in Central Park.  A beautiful spot if ever there was one.  That was a trip I had planned to take on my birthday, but my kidney had apparently had other plans that day. 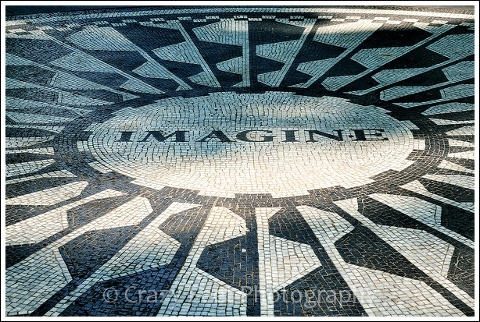 A beautiful spot to stop & ponder

My trip to New York hadn’t turned out much like I had planned it, but I am grateful for the experiences that I had, grateful for the care I received at the hospital, grateful that my kidney was feeling better, grateful for the folks that took time out of their busy lives to come & see me or call, for those that sent flowers, notes & gifts.  I am especially grateful for health insurance and medical benefits; & for the enormous bag of chocolate that a very kind man went out of his way to bring me.

I am very grateful.