Across the Pond | Mince Pie Mania

The British have a bit of crush on dried fruit.  Or so it seems.  Especially around Christmas time, the shops are filled with jars of mincemeat, mince pies, Christmas pudding & Christmas cake.  And what these all have in common is dried fruit.  When you think about dried fruit in England, images of sultanas, raisins, currants, mixed peel & glace cherries spring to mind, rather than dried apple rings, cranberries or slices of mango.  I’ve noticed that Americans do not share the same fascination for all things mincemeat or heavily {dried} fruited concoctions like the Brits.  It’s a rare American I’ve bumped into who likes Christmas cake or Christmas pudding.  Even rarer is one who likes mince pies.  But in England, Christmas just wouldn’t be Christmas without mince pies.  We eat dozens of them in December (and only in December.  Or maybe a few in November as well).  It’s rather like having Thanksgiving with out Pumpkin Pie.  Perfectly unthinkable.

I *love* mince pies.  When we arrived in Bowness my brother, my adorable nephew & I headed to the local store to purchase some vittles for the next days sustenance.  We were greeted by an enormous stack of boxes of mince pies as we entered the store & needless to say several boxes very quickly found themselves in the bottom of our shopping trolley (cart).  I can’t remember the last time I was in England during mince pie season.  It has been quite a while.  Maybe even 3 years.  Time flies. 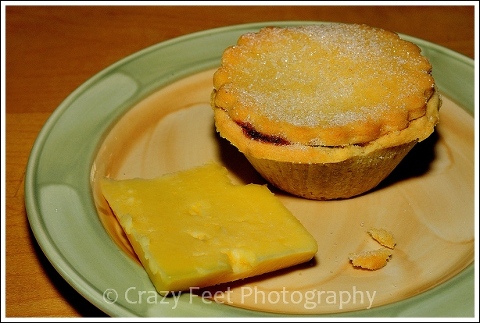 Mince Pie & a piece of cheese

It was the next day when the mince pies were finally released from the safety of their box & tossed into a warm oven, just to take the chill off.  Warm mince pies are somehow even more delicious than cold mince pies.  The pastry is softer, more tender & the filling more comforting, more juicy.  If you read my earlier ramblings on raisins you won’t now be surprised to learn that mince pies are often served with a tasty piece of cheese.  It’s that raisin & cheese thing again.

Sweet crumbly pastry surrounding thick, dark, juicy succulent raisins & currents in a syrupy sauce.  Swoon.  What on earth is not to like about that? 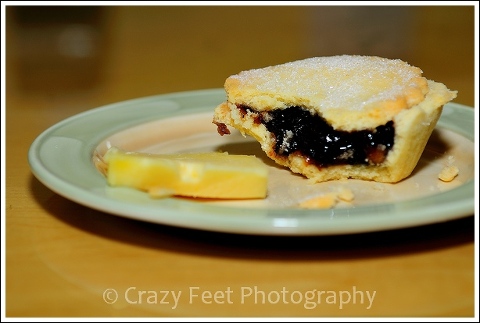 Mince pies are very simple: mincemeat encased in pastry.  Either pâte brisée (shortcrust) or pâte sucrée (sweetcrust) are the usual pastries of choice for the containment of the mincemeat.  I grew up eating mince pies made with  pâte brisée (no sugar added) which were utterly delicious.  My mother was a mince pie master back then & made dozens & dozens of the things.  But while doing my Pastry Chef training I learnt the joys of pâte sucrée (sugar added).  That first year at school I took over the role of mince pie master & made dozens & dozens of them to stock the family Christmas pantry.  Most store-bought mince pies use pâte sucrée & to be honest they are one of the few things that are every bit as good as home-made.  Except you don’t have to make them. 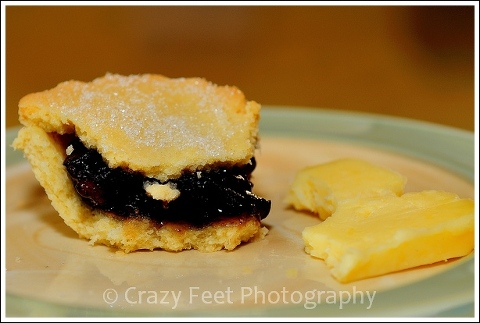 It's that raisin & cheese thing

I lost count of the number of mince pies that I consumed over the last week.  It really doesn’t matter.  I won’t be getting another one for at least a year, so I feel no shame about my week-long mince pie mania.  I am not sure  that I can even get mincemeat in the US to make my own.  I have a suspicion that the suet in mincemeat would prevent it from being an importable product.  I’ll have to check that out.  But even if it turns out I can get mincemeat on this side of the pond, I am just not sure that it would be quite the same as having mince pies in England.  Funny how that works sometimes.  It’s that physiological / psychological connection again.