Will, Kate, and a Beast of a Burger

Uh oh.  Deja vu.  As I sat in Sage Organic Bakery & Cafe up on Capital Hill with Deanna from The Old Hen today, taking a shot of her fabulously lush-looking vegan brownie with vanilla cream, my lovely friend said, “Is that it?  You just take one shot to get those fantastic pics on your blog?”  Yikes.  I remember what happened last time someone uttered those words to me.  It wasn’t pretty.  And it ended up costing me dosh.  Plus a tiny dent in my self-esteem. 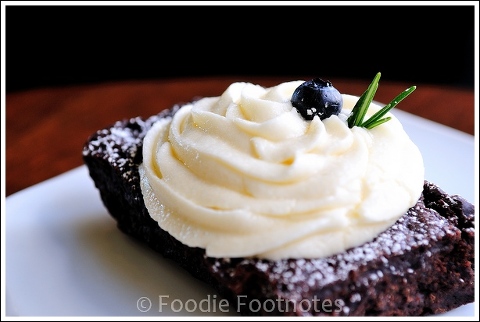 Phew.  No re-runs required today.  Not that I would have minded a re-run to Sage Cafe, but more about that later.

Deanna and I have been trying to align our respective calendars for quite a while; at least 3 months.  But today was the day.  We finally got to have lunch.  I was just coming off a 70-hours-in-4-days work week.  A great week, but a long, busy week.  Wednesday night I slept on a cloud (aka the comfiest bed in the world) on the 4th floor of the Heathman Hotel, which although blissful, made the week seem even longer, somehow.

After I got home from the office at 10 pm last night I fell into {my own} bed & made the {normally disastrous} decision to not set my alarm.  I knew that would mean that I’d miss THE Wedding, but, honestly, having grown up in England & being raised on Royal Weddings, it’s really only the frocks & the faces that change.  Everything else is pretty much the same.  I planned to catch up via BBC Online whenever it was that I woke up.  Consequently, my Friday went sideways before it even started.  I finally rolled out of bed around 7:30, stumbled down to my desk & fired up the laptop.  Then, before I knew it, it was 9:30 & I had but an hour to get dressed & head out the door for lunch.  This is also known as “getting nothing done”.  I hate when that happens.

It was interesting going to Capital Hill later than 8 am & on a Friday.  However, I am beginning to see yet another advantage to the whole breakfast thing.  Parking.  Thank goodness I thought to bring my shoe-horn with me, otherwise I might still be there, jammed between that big green Chevy Tahoe & the rusty red Ford Explorer.  Sage Cafe is a couple doors down from Smith where I had a fabulous Full English Breakfast last year.  Quite fitting that I should be almost back there on Royal Wedding Day.  I wonder what Kate had for her last breakfast as Miss Middleton, the commoner?  Maybe she just left space for all those smoked salmon sarnies coming her way later on at Buck House.

When I strolled up, Sage Cafe was empty apart from the darling Deanna.  I am glad we got there early though, since it wasn’t long before the place was packed.  And strangely, a lot of the customers were wearing scrubs.  Is that a sign?

We perched at one of the tiny tables & began to peruse the menu.  Deanna had predicted via Twitter that I would have Hot Chocolate.  Alas, Sage has no hot drinks on offer.  None. 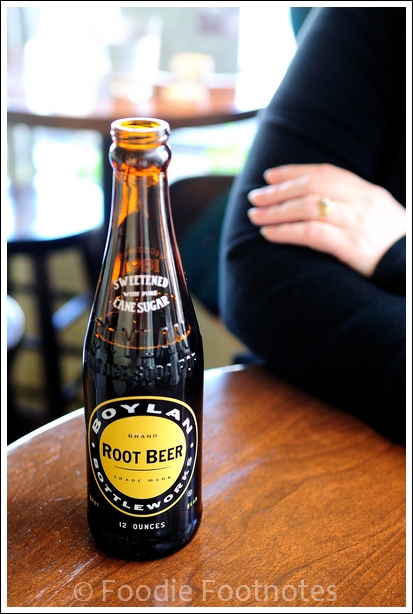 It was as we searched the menu for something familiar that it slowly dawned on us that we were in vegan territory.  I knew Sage was organic, but I had somehow missed the whole vegan part.  Deanna tweeted that she was scared.  We still kept hoping that under one of the enticing sandwich names – The Bacon Burger, The Crazy Jamaican Burger & The Fremont Philly – we would find some meat lurking.  Or maybe some cheese.  Or, in fact, anything that used to be alive & either clucking or mooing.  Turns out the menu is a total bait & switch.  There were some strange words floating around on it too.  Like seitan.  Who knew?  We asked our tiny server what was good on the menu.  She pointed out various things that she liked, but really, we were still lost.

Until I took my first bite of this. 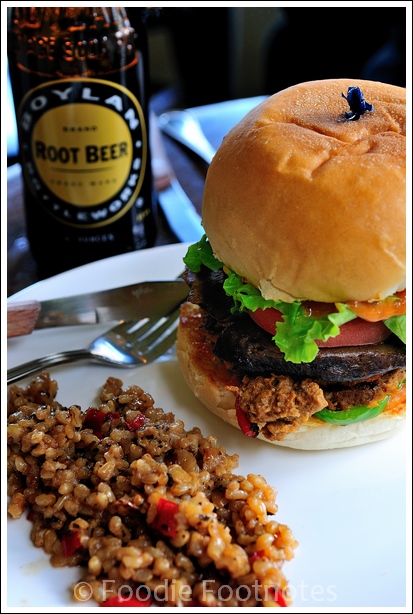 And Deanna took her first bite of this. 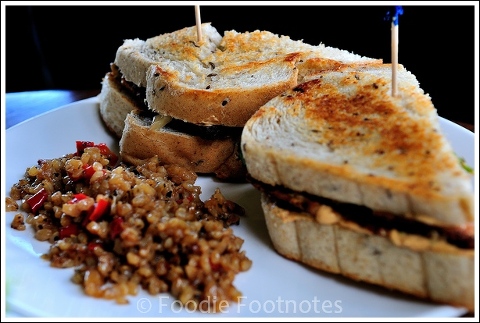 And, almost in an instant, we were both thinking, “Wow.  If this vegan food tastes like this all the time, I could be converted.”

Deanna’s Chipotle Grill ($10.00) – baked tempeh on grilled rye bread with avocados, beefsteak tomatoes, caramelized purple onions, cilantro, and chipotle mayo – was a huge hit, except that it was a little too spicy hot for her delicate little lips. 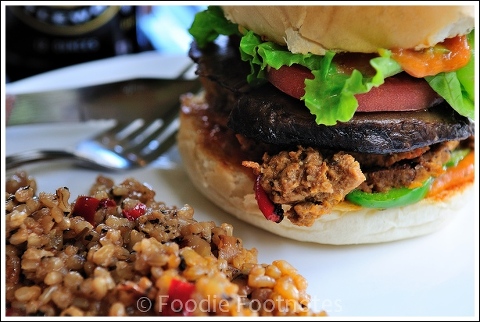 My Portobello ($11.00 ) – a smoked portobello mushroom and seitan on a small patella bun with caramelized onions, tomatoes, sweet peppers, lettuce, and vegan portobello sauce – was a drippy, messy, beast of a burger.  With no meat.  Turns out I didn’t miss the meat part at all.  It all went slip-sliding away pretty quick because no matter how hard I tried I just could not hold the whole thing together while I attempted to get my chompers around it.  I didn’t care.  Every piece was delicious.   And that grain “salad” that came on the side…I could have polished off a huge old bowl of that stuff.  Yum.

Then came the dessert goodies.  I was tempted by the Pear & Ricotta Tofu Crêpes ($12.00) with spiced maple butter sauce, but was also wowed by the display of cupcakes by the till.  Deanna honed in on the Chocolate Brownies.  I settled on the Vanilla Cupcake with Raspberry & Mint.  The cafe was a little warm for the frosting, hence the frosting-slide. 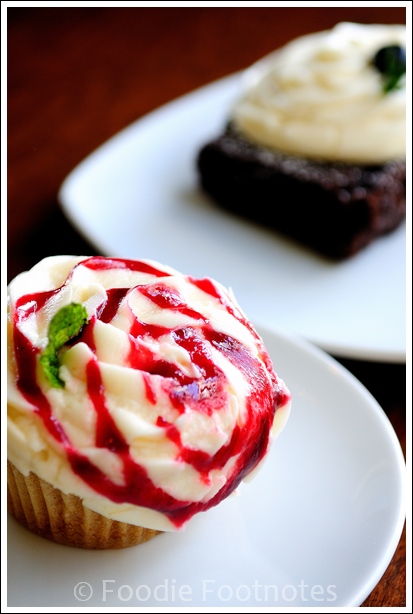 Honestly, I am not sure what the cakes were – vegan, gluten-free or both.  What I do know is that they were good.  Really good. 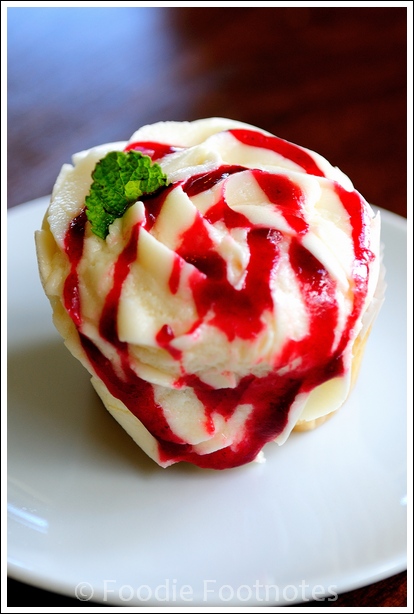 We had a short exchange on what the frosting could be made of if it wasn’t made of milk, cheese, eggs, butter, shortening or anything else animal-y.  The exchange was short because we were stumped.  A few minutes on the Internet just now revealed that there are such things as vegan margarine & non-dairy cream cheese.  Who knew?

We also had a short exchange about hot chocolate & how Deanna wouldn’t know a good one if it hit her on the head.  The exchange was short because that was the only encouragement that I needed to suggest we relocate to Cafe Presse so that Deanna could become intimately involved with the mother of all Chocolat Chauds in Seattle. 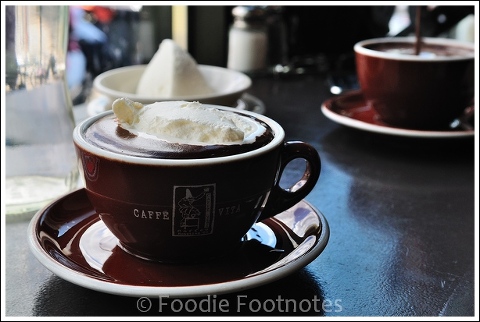 I don’t believe there’s a need for words. 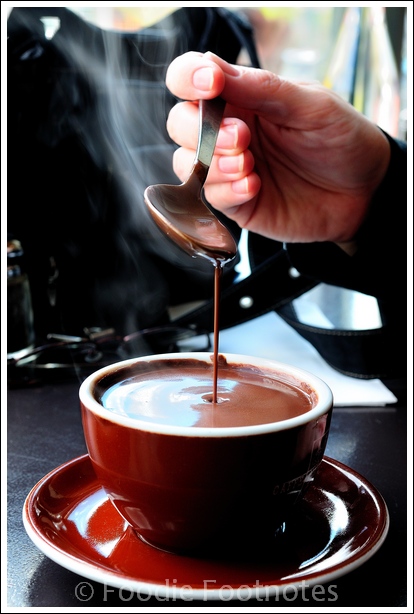 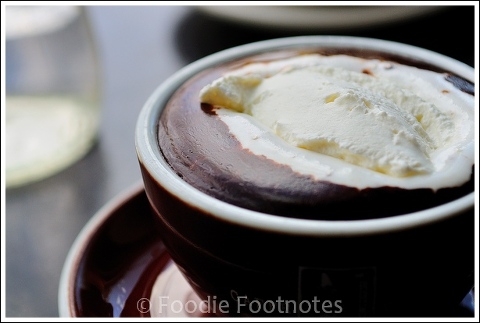 This turned out to be a most splendid lunch.  I can even say that I am excited to eat vegan food again, and that is something that I never thought would happen to me.  Ever.  Given that Sage is the first vegan restaurant that I have eaten in, I have nothing to compare it to.  I still say that it would be difficult to top the vegan burger I ate there today.