Yesterday was a *fantastic* day.  I skyped with my nephew, Charlie.  He showed me his bendy bus & his big lorry.  He high-fived with the web-cam & blew me kisses.  He told me that he still thinks tractors are the most fabulous vehicles ever invented.  Now that it’s Spring in England he gets to ride his little John Deere around the garden like a pro.  And at high speed.  He also told me that the best medicine for a bump on the head is cake.  He sure is smart for a 2 year old.  I love that boy to death.

Then, the special charity project that I am working on had a submissions deadline of midnight last night and this morning when the numbers were tallied up we discovered that our work had produced an amazing result.  As the other {grown-up} Charlie in my life so eloquently put it, “This just blows the doors off the hinges!”  I can’t tell you how grateful I am to have been cajoled into being a part of this project.  I have lost count of the number of times I have been laughing out loud over the last 5 weeks with my Team mates.  Awesome, awesome group of people.

The other highlight of my day was realizing that I had dodged a huge bullet.  When the first 2 communications written by someone that you don’t know are littered with the word “morons” it really shouldn’t come as any surprise when a strange flame mail shows up next containing the word “stupid” while also berating you for using your nickname instead of your full name.  Er, OK.  Time to get out of Dodge.  Faster than a greyhound at the races.  Phew.  Mind you – I’m {very} grateful that the flame mail showed up so {very} soon.  WYSIWYG.  Love that!

Today is also shaping up to be a *fantastic* day.  A fabulous breakfast, a big, blue, wide-open sky & a toe-curling amount of sunshine.  Talking of toes – there’s a pedicure at Penterra Spa in my future this afternoon – THANK YOU, Belinda!  YAY!

The only downside to the last 36 hours was getting an email from my Breakfast Buddy, Taylor, saying that she was sick & couldn’t meet me today.  Rats.  Feel better, Taylor!  Given that I could now just randomly go anywhere I fancied for breakfast, I decided to just head up the street & support my local community over at Mabel’s On The Ridge.

I’d been to Mabel’s for dinner quite a while back when they were newly opened & I wasn’t impressed, but I’d heard really good things lately.  I firmly believe that everyone deserves a chance to figure out any new-restaurant-wrinkles.

Emily is about the jolliest server I’ve had the pleasure of bumping into in a while.  Mind you, the sun was well and truly out, & that in itself was bringing smiles to every face I’ve passed so far today, including mine.  Mabel’s breakfast menu is pretty traditional – corned beef hash, eggs benny, steak & eggs, omelets – but they’ve livened up a few dishes with names such as Molly Wolly Waffles & Vanilla Kissed French Toast.

I decided to keep it simple with The Seattle Omelet ($11.95): “Sautéed smoked Salmon, sliced green onions, and shredded Monterey jack cheese make this Pacific Northwest favorite simply delicious” exclaims the menu.  And you know what?  The menu is right. 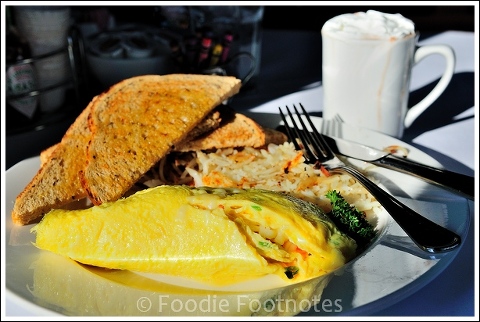 Mabel’s make a great omelet – in fact, it’s one of the omelets I’ve enjoyed most in the last year.  Fantastic flavors, beautifully cooked.  I asked for rye toast, although I still don’t know why.  I am glad I did though – that rye toast is delicious.  I was expecting something much darker, but was happy as a clam with this blond version once I’d had my first bite.

I was disappointed when the hash browns showed up all pale & uninteresting, but I have to report that taste-wise they were some of the tastiest hash browns I’ve eaten since The Georgian Hotel Big Breakfast Adventure.  I’d ask for them crispy next time.  Yes, there will definitely be a next time for me at Mabel’s. 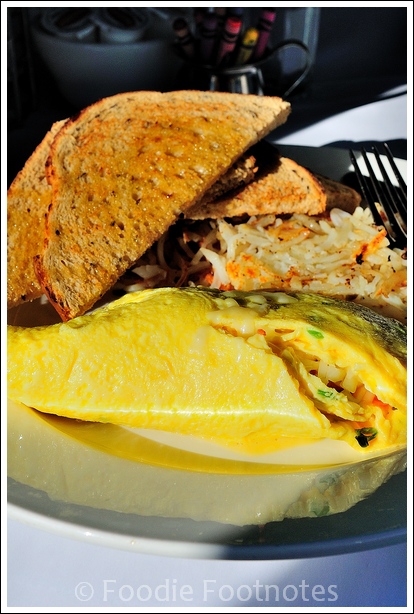 The only disappointment was, of course, the hot chocolate.  I’ve had worse, I’ve had better.  If they would just use real cream instead of that ‘whipped topping’ (what IS that stuff anyway?) it would help.  A lot.  I’ll have Peppermint Tea next time, please.

Mabel’s on the Ridge is just a lovely place to head for a weekend breakfast.  Great food, warm & friendly service, comfortable family environment & very reasonable prices.  If you’re ever out and about at Snoqualmie Falls early one weekend I highly recommend dropping into Mabel’s for a hearty breakfast on the way.  It’s only about a mile away.  And if you’re local, you’ll likely be thrilled to know that there’s a breakfast gem right in your back yard.

Go Mabel’s!  Meanwhile, I am going back to laughing out loud.

2 comments
« Complete with Lipstick
Will, Kate, and a Beast of a Burger »