Arriving at what-turned-out-to-be a fabulous dinner at Marjorie the other week, I noticed a gaggle of people spilling onto the sidewalk from the joint a couple doors down.  A gaggle of people outside any eaterie will surely spark my attention.  Turns out the eaterie getting all the lovin’ was Skillet Diner – offshoot of the fantastically popular Seattle food truck housed in a vintage Airstream trailer: Skillet Street Food.  The vibe emanating from the corner of Union & 14th had me adding Skillet Diner to my go-to list immediately.  Once I discovered that they open at 7 am for breakfast, they moved straight to the top of my list.

Today I had plans to head over to Ellensburg to hang out with a fellow photog & shoot stuff.  What better way to get things started than with a Big Breakfast Adventure up on Capitol Hill.  There’s a significant number of places that only open for breakfast or brunch on the weekend, so I was even more eager to try Skillet Diner when I saw they start servin’ up the good stuff at 7 am every day of the week.  Traffic was heavier than I am used to having to tangle with, but it was still early enough to whizz right down the freeway & up 14th without a hitch.  I rolled up at 6:30 & there it was: street parking right outside the door.  It was like they knew I was coming.  One conference call later it was 7 am and I was ready to hit the Skillet Diner’s door.  Being first over the threshold I had my pick of tables & cozied up next to the window.  Thinking about it, it’s hard not to sit by a window here – huge picture windows line both sides of the corner building. 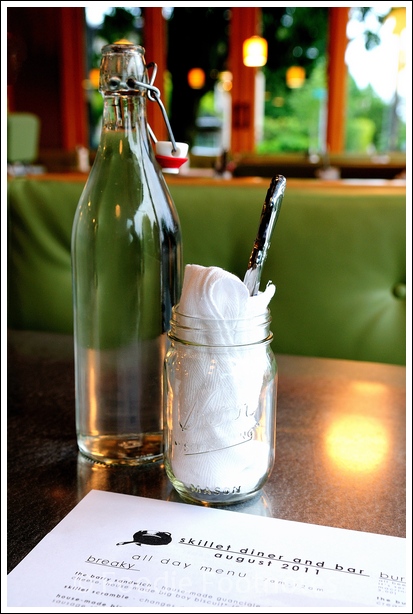 Skillet Diner have that whole Mason-Jar-for-a-glass thing going on, made even cuter by them popping the {kitchen cloth} napkins & the {mismatched} cutlery inside.  I was also lovin’ the mint green seating & the bubbly, wide-awake servers.  I felt right at home the instant I slid into my booth.

Brandon (that name always makes me smile) was just as perky as can be when he came over to get me started.  “Are you carnivorous?” he asked.  Well it sure beats the most asked question of me so far in 2011, “Are you straight?”  I didn’t have to think too hard since the answer to both is the same.  “Yes.  Very.”  Once we’d got that settled, it didn’t actually make choosing what to have any easier off the way fun & eclectic menu.  I think I pretty much ignored all of Brandon’s advice.  But that’s OK because I’ll definitely be going back to try all the things I didn’t have today.  Yep.  It was that good. 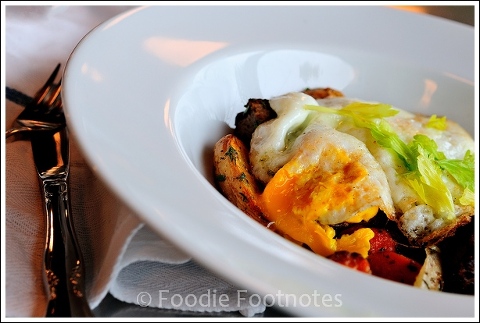 The vegetables were ridiculous.  Shockingly flavorful with a slight crunch.  It’s been a while since I’ve had veggies that good.  The aroma of the fennel & celery alone was about enough to make a girl become a vegetable groupie. 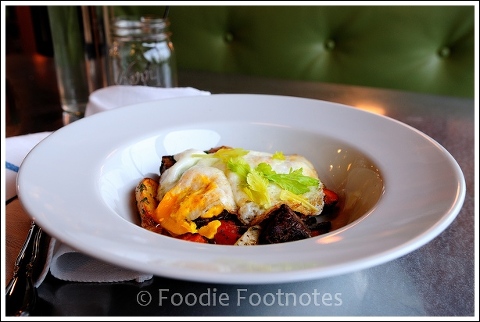 And then there was the beef.  Oh my.  It had a slightly crispy surface & then fell apart the instant I went to bite into it.  The flavor was incredible.  If I had the tiniest jot of criticism about this dish, it would be this:  NOT ENOUGH.

It’s Friday, Brandon.  Give me something more.  Brandon came to the rescue with, “Seize the Griddle Cakes!” I have never eaten a Griddle Cake.  At least, I didn’t think I had, but you know how I love {good} surprises, so I was game to try them.  Griddle Cakes seems to be another name for hotcakes or pancakes, although these were decidedly different looking from any hotcakes or pancakes that I’d ever seen.  These were fat & dense, erring towards the texture of cake rather than the light fluffiness of a pancake.  Honestly, a little too dense & cakey for me. 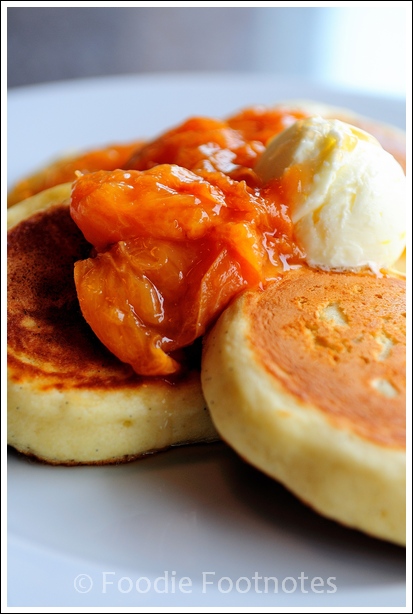 The peach compote was fresh, syrupy & delicious, with an intense peach flavor.  The lemon zest butter was mad.  Like eating solid whipped cream with a powerful lemon kick.  That butter kicked all kinds of pancake-topping a**.  In fact, I could easily have just eaten a bowlful of that compote with a couple spoonfuls of that butter & been deliriously content.  I daydreamed about that butter all the way to Ellensburg.

I was beaten out by Griddle Cake #4, but I didn’t leave one tiny smear of compote or butter on that plate. I loved Skillet Diner & everything about it.  It just has a really good feel.  Neighborhood but upscale, trendy but retro, clean & simple but warm & friendly.  Brandon & The Butter totally made my day.  Then I toddled off to Ellensburg & shot things.  Including my own feet. 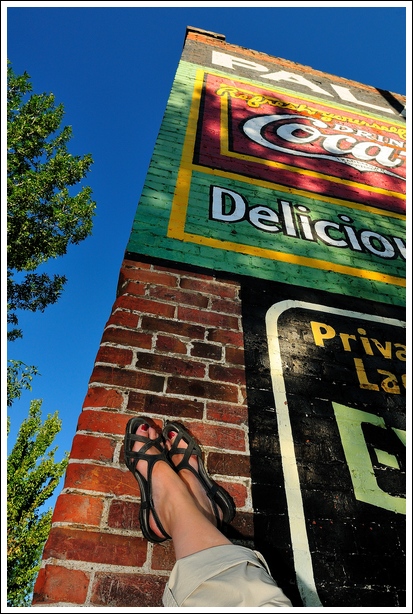 An all-round fantastic Friday:  driven by passion, powered by the best corn beef hash on earth.

3 comments
« Twitterpated, But Not Totally
Moby Dick & The Pie That Tasted of Summer »