Green, leafy, and kinda slimy if it’s bruised, old, cooked or you’ve chewed it – spinach and I, we go way back.  We’ve had a pretty tumultuous relationship.  For 34 years spinach was on my forbidden foods list, along with melon and coconut.  Oh, and {hot} spicy stuff.  My inventory of hated foods has always been very short.  There are things that I generally won’t choose if I have an option – celery, radish, tomato-based sauces and wholemeal anything – but the no-go’s are very few and far between.  Spinach was one of them.

I was introduced to spinach by my mother, before I was conscious of anything other than the need to eat, sleep and poop.  She will claim that I liked it.  My first recollection of spinach was dark green and slimy with the taste of old socks.  I promise you, mother, it was not good.  I grew up thinking that spinach was square, because the only way I ever saw it was in a small, square boxes in the frozen food section.  I still have flashbacks to those days when I caught sight of the spinach box crammed into our tiny freezer.  In my mother’s defence, she didn’t feed it to us very often, but when she did, inevitably a battle royale ensued.  Not eating every last cell of food put in front of you was not an option in our house.  Even if it was something that you hated – it was all going down the hatch before you left the table.  Including heated frozen spinach.  The slimy texture disgusted me.  The taste was an anathema to my taste buds.

My mother seemed to believe that forcing me to eat something that I hated was character building.  Or something – which TO THIS DAY I have never understood.  I mean seriously, I ate everything else that was ever put in front of me.  What was the deal with force feeding me spinach??  Could there not be *one thing* I was excused from munching on?  Nope.  So, on spinach days it was a given: my time at the table would stretch on for hours until the last slimy spoonful had slid down my gullet; and another wedge had been put between my mother and I.  “It’s good for you.”  My mother would snap.  I am still waiting for an explanation of why making me eat a food I detested was in any way good for me. While I am at it, can anyone explain to me why parents continue to believe that saying, “Because it’s good for you”, will cause children to be motivated to eat something they find entirely distasteful.  Who cares about how good something is for you when you feel physically sick shoving the stuff down?  If my body is busily staging a revolution, I generally go with it not being a good thing.  Down with spinach!

Gosh.  Am I starting to sound a little bitter?  I  was!  I say “was” because a few weeks after I moved to the US, I was invited to Daniel’s Broiler in Bellevue to sample their lunch menu.  The chef had made me small portions of just about everything on the menu, one of which was Creamed Spinach.  Having escaped from my mother’s grasp on my tender spinach-hating taste buds some 13 years earlier by moving to Australia, I had not eaten spinach for an awfully long time.  I am still not sure what came over me, but I heard myself saying to the Catering Director, “Let me try the Creamed Spinach, please.”  I took just one mouthful before uttering, “Could I have a whole side of that, please?”  And so began my love affair with spinach.

So inspired was I by Daniel’s Creamed Spinach I scoured recipe books to find the perfect recipe, determined that I was going to eat that stuff every week – just not at Daniel’s Broiler.  Shortly thereafter I bought my first bag of fresh spinach.  In my life.  I’ve bought an awful lot of fresh spinach since that day.  Coming to America was a spinach revelation to me.  I’d never eaten raw spinach before landing here, and I am not convinced I even knew what spinach looked like, other than dark green and square.  The irony is I now eat more spinach than any other food.  I easily get through 3 lbs a week.  Easily.  Spinach for President!

So when the author of The Calorie Myth called me up this week and said, “Hey Carrie, can you cook us up something at your Friday Night Dinner this week that uses spinach as a base?”, I said, “Your wish is my command, Jonathan.  Consider it done.”  The poor guy is enduring hours trapped in a studio with me recording podcasts every week.  It was the least I could do.

Given that last week was particularly mad in the NOT. ENOUGH. TIME department, I was also planning on a one dish meal instead of the usual pattern of a protein dish plus two sides, or salad and side, or two salads.  I had reached a one dish limit.  On top of that I wanted to take my new mandoline for a test drive.  That required watching a training CD first.  Who knew a super-fancy slicer required a training CD?  I’m glad I watched it.

With all that in mind I came up with Peanut Butter Chicken Salad. 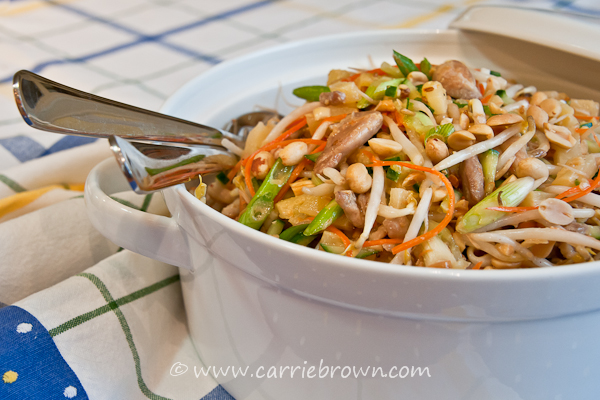 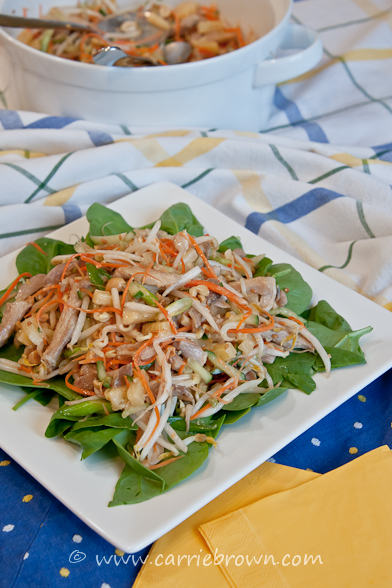 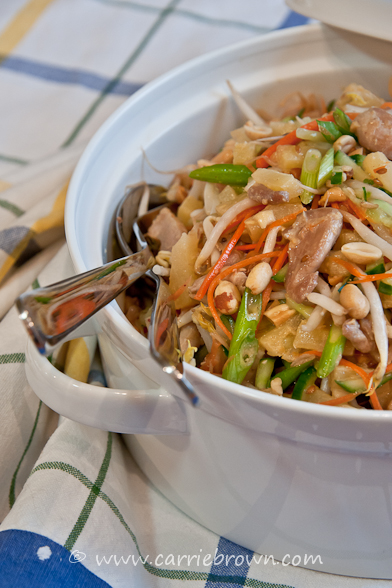 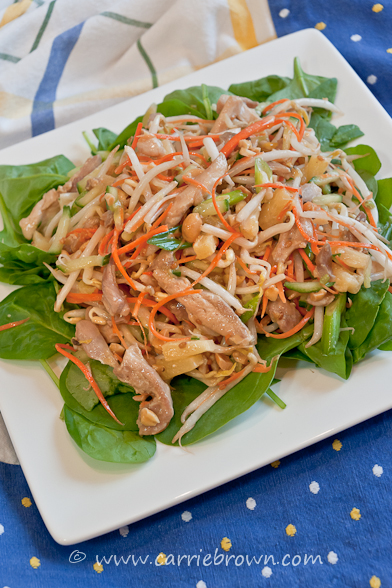 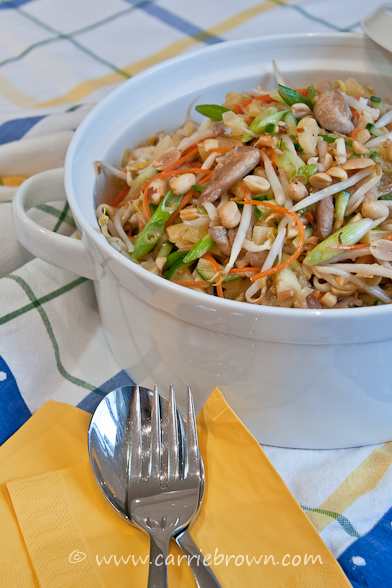 This salad is an absolute snap to prepare.  Especially if you have a mandoline to make light work of slicing the carrot and cucumber.  The dressing is also whipped up in a New York minute.  The only thing that takes any time is sautéing the chicken strips.  If you’re organized, you can sauté chicken strips ahead of time and freeze, or keep in the ‘fridge, just grabbing the amount you need as you toss the salad.  If you froze them you’ll need to defrost them before the tossing bit.  Unless you have a fondness for watery salad. 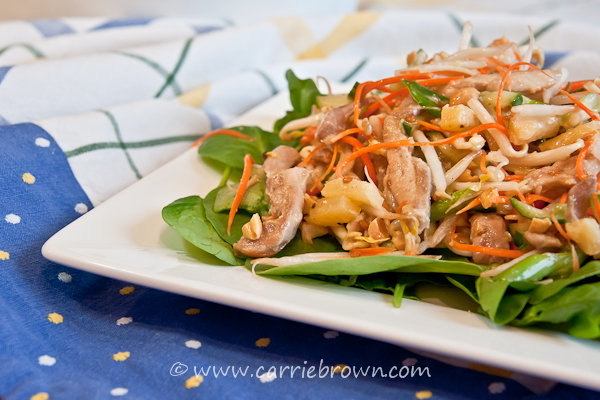 Becky & The Schoenster loved this salad.  They thought it would make a great work-day lunch.  We thought that it would not be so good the next day, but, since it is the next day and I finished off last night’s dinner for lunch, I can confirm that it is as crunchy as satisfying the next day as it was 10 minutes after I made it.  The dressing loses its body after a night in the ‘fridge, but apart from that, it was all tasty, crispy goodness.

A fine way to get a ton of veggies inside you without you even realizing it – coat them in peanut butter, add chicken and pile it all on a bed of spinach.  Yum.

Are you happy now, mother?