Gosh.  I had no idea I was going to get the reaction that I did when I innocently posted a casual shot of my pre-baked creamed spinach on Facebook last night.  Yikes.  I used to get that reaction in my pre-keto life when I posted cupcakes, but spinach??  Who knew.  Everyone wants creamed spinach it seems.

I’ve written about my dodgy history with spinach before.  Given my early hatred of the green stuff, that I even contemplated creating a keto Creamed Spinach is miraculous.  The contemplation happened while I was Atlanta this last week.  I made my now-annual trip to Ruth’s Chris to eat lamb chops and a double serve of creamed spinach, and enjoyed it so much I decided I wanted to eat creamed spinach more often than once a year.  That decision required me to create a low carb version.  So I did.  Little did I know that lovely readers the world over were also anxious for Baked Creamed Spinach. 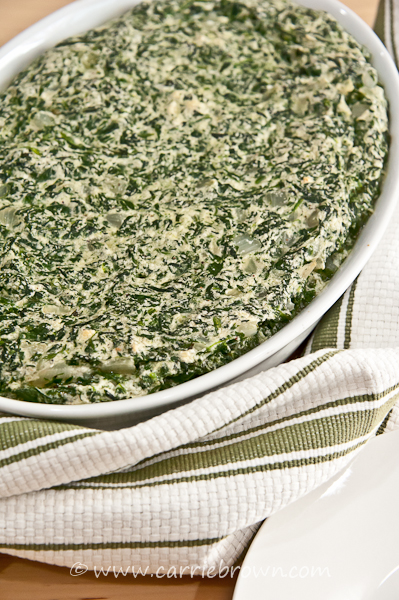 As soon as I got back to Seattle, and after a good nights sleep, I legged it down to the grocery store to buy a ridiculous amount of fresh, green spinach goodness.  Plus an onion.  Then I set to work.

As if 2lbs of spinach and a splash of coconut weren’t enough, I added some whipped egg whites to amp up the nutrition, and conjured up a soufflé-style version of Baked Creamed Spinach that really rocked my world.  It is thick, creamy, and entirely delicious.  I don’t mean to brag, but I liked it even more than Ruth Chris’ regular version.  No, really.  More flavor and a thicker consistency.  We love that. 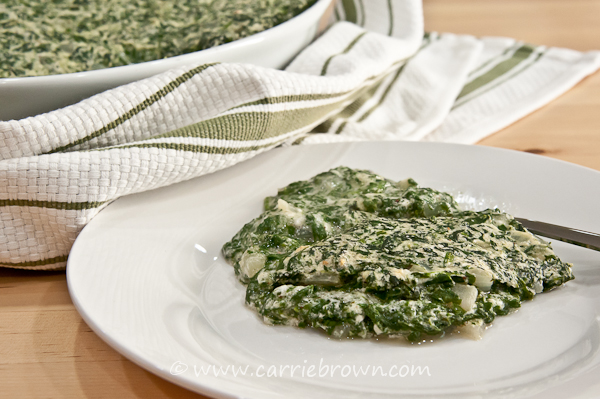 This Baked Creamed Spinach is even good cold the next day.  Or re-heated.  I know – in a very rare occurrence – I had leftovers.  Even I can’t eat 2lbs of spinach and 1lb of onions in one sitting.  Well, I expect I could’ve done had I not also had a fantastic grass-fed steak on my plate to polish off.

If you are not a spinach lover, I urge you to try this once and see if your taste buds can’t persuade you to change your mind.  Creamed Spinach is what did it for me.  I just wish I hadn’t waited so long.  Mmmmm, Baked Creamed Spinach.

28 comments
« Grass-fed V. Grain-fed And How To Cook A Perfect Steak Without A Grill
Rikke: “Eat To Live And Live To Eat” »