This morning when my eyes fluttered open it was 4:47, or something very close to that, and I could tell, even before I’d finished focusing on the window, that the entire house was wrapped in fog.  Like a chunky, knitted woollen scarf pulled snuggly around your neck in winter.

Daisy {the cat} and I decided against getting up, and instead, lolled under the covers reading cook books and fantasizing about salads.  We’re in denial about this atrocious weather we’ve had lately.  It’s summer and we want to wear flip-flops and flimsy tops and throw the windows open.  And eat salads.

Armed with a large stack of post-it notes, I laid in bed scribbling and sticking, scribbling and sticking, like I was somehow convinced that if I concentrated on salads long enough and hard enough, summer would appear.  Isn’t that how the Law of Attraction is supposed to work?  After an hour of furious note-making and page-turning I popped my head out from under the covers and peeked towards the window.  Fog.  So I snuggled back down and had a nap.  Daisy approved.  A cat with a penchant for a Saturday morning lie-in. 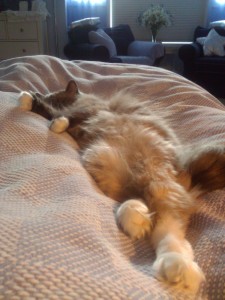 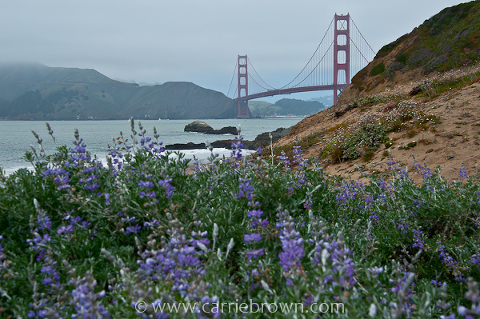 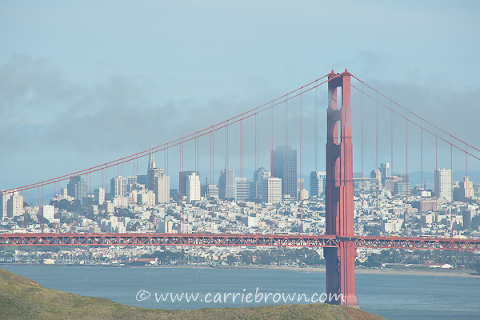 There’s so much about my last trip to San Francisco that I haven’t shared with you.  When I got back at the end of April, life got a little bit crazy.  I’ve been getting busy with that modern-day Adonis, Jonathan Bailor, and I’ve been cooking like mad for The Friday Night Dinners.  Throw some Big Breakfast Adventures in there too.  Plus another project…another collaboration that I’m still working out the wrinkles on.  It would be a very fun project, but only time will tell if it comes to fruition.  If it does, I promise you’ll be the first to know.

It’s all very exciting.  And a little scary.  And a whole lot of work.  And by work I really mean time and effort.  Because I am having so much fun with all this stuff I can hardly call it work.  Once I was home from San Francisco though, I quickly ran into that thing called NOT. ENOUGH. TIME.  After managing to cobble 5 posts together, my glorious road trip became a sweet, sunshine-and-doughnut-filled memory.

So as I lay there buried beneath a bunch of blankets and a small, purring, over-fluffy cat this morning, thinking about San Francisco, I got all enthused to share with you some of the bits that went unmentioned earlier.  I clambered excitedly out of bed and – I admit it – turned the heating on.  I have no shame.  My mother would tut-tut at such a thing.  I’m OK with that – both having the heating on in June, and my mother’s tut-tutting.  There’s five thousand miles of water between us, but I can still hear “Tut-tut!” ringing in my ears; I just don’t pay any attention to it anymore.  My mother would tell you that I never did anyway.

I discovered, while in San Francisco, that I have a love for fire escapes slapped onto the sides of buildings.  I could happily spend a whole week there just shooting fire escapes.  I am thinking next April.  In the meantime, please welcome my favorite fire escape from this last trip.  I think I shall name him Walter.  Whoever chose Walter’s paint colors was definitely in their happy place that day. 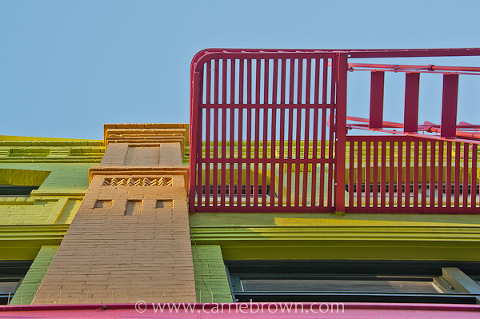 I also had some foodie moments which I haven’t shared with you yet.

There was dinner at Cafe de la Presse, right by the gate to China Town. 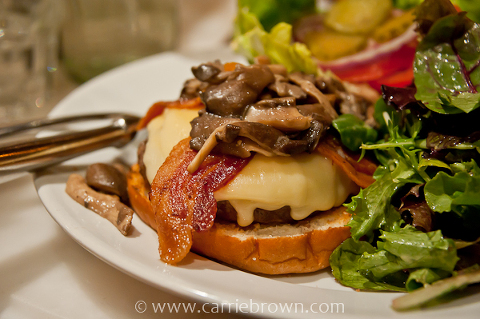 They serve up a mighty fine burger in their I-think-I-might-really-be-in-France style restaurant.  Sparkling glasses, highly polished silverware and yards of white porcelain, marble tables, shiny black wood.  Handsome waiters dressed in black and white, with dazzling white, starched half aprons.  Genteel service and an air of sophistication without bank-loan-required pricing.  They happily subbed out salad for the fries.  And a very good salad it was too.

China Town is a fun place to scoot around.  A hive of activity and a riot of colors. 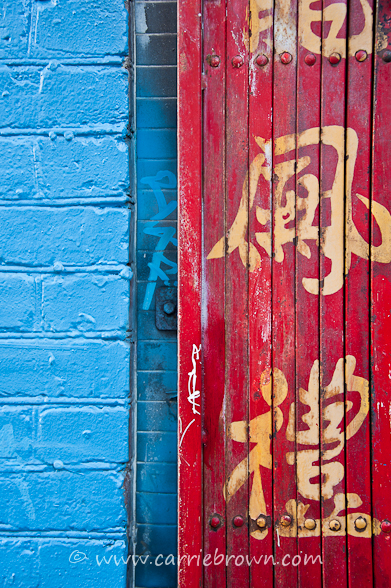 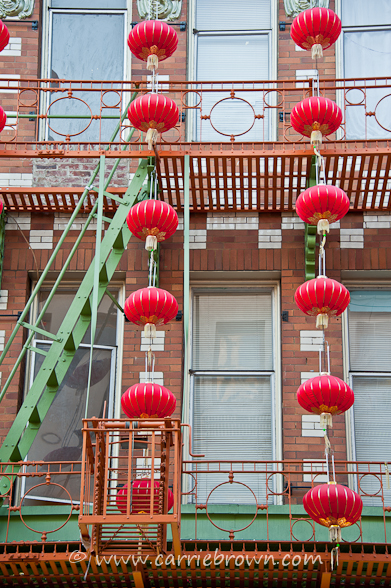 Haight-Ashbury is always good for a spot of color, too. 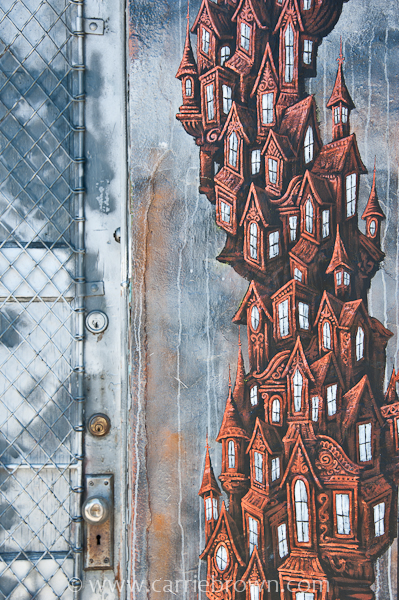 And Golden Gardens.  San Francisco: it’s just very colorful; in many more ways than one. 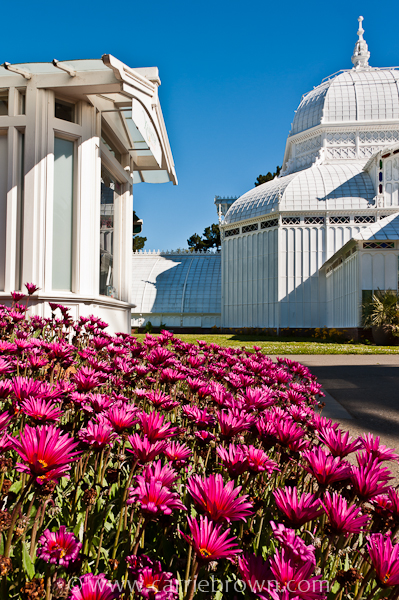 The Golden Gate Bridge is like a magnet to me.  In the end I forced myself to be near it and shoot other things.  Like gunpowder barrels at Fort Point.  And the stairs leading skyward from Baker Beach. 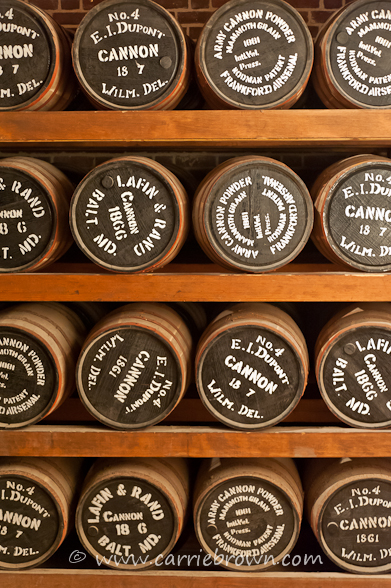 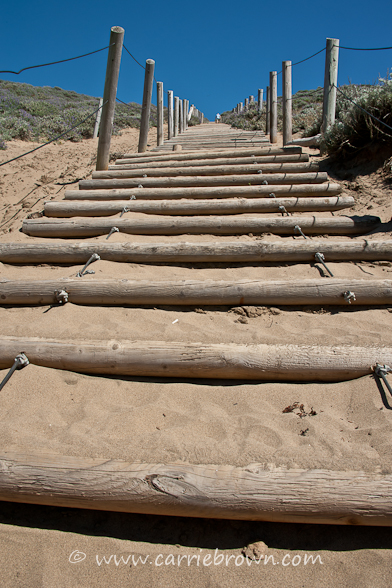 I went to Tartine and ate a Chocolate Hazelnut Tart.  Roasted hazelnuts make me giddy. 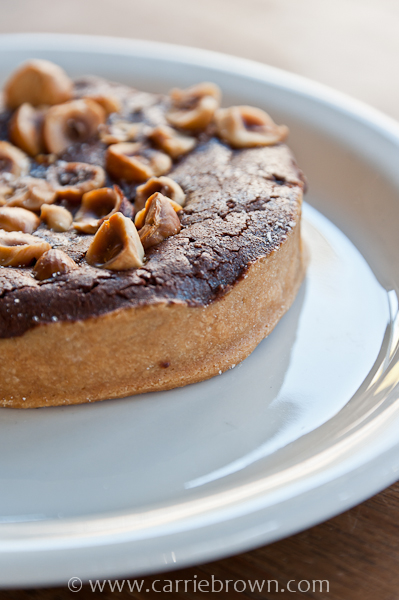 Another day I went to Tartine and ate an open sandwich for lunch. 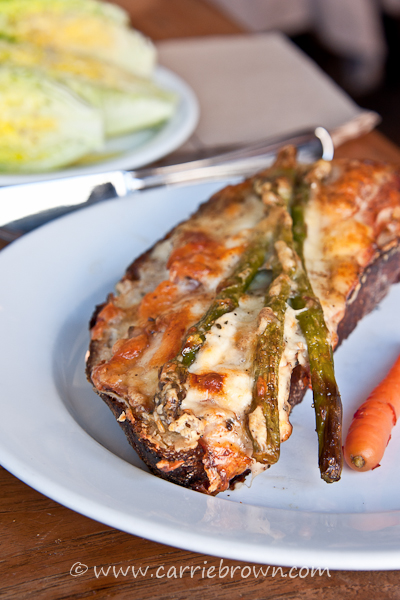 And salad.  That lettuce was rooted firmly in the ground no more than 17 minutes earlier, I am certain.  I swear I saw one of the leaves still growing. 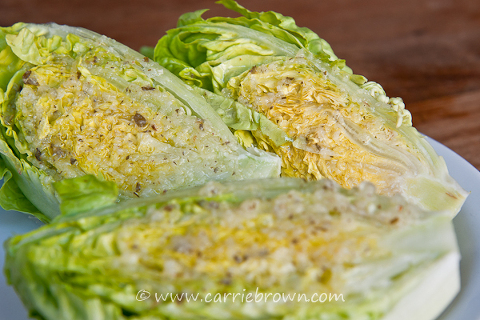 And I am pretty sure I ate another Lemon Cream Tart.  Plus a meringue thing with cocoa nibs, the name of which I quite forget.  I blame the Lemon Cream Tart for distracting me. 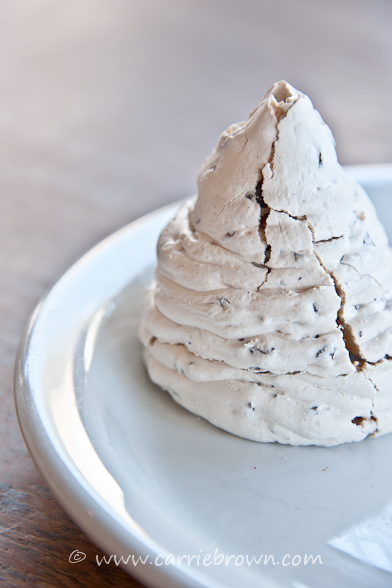 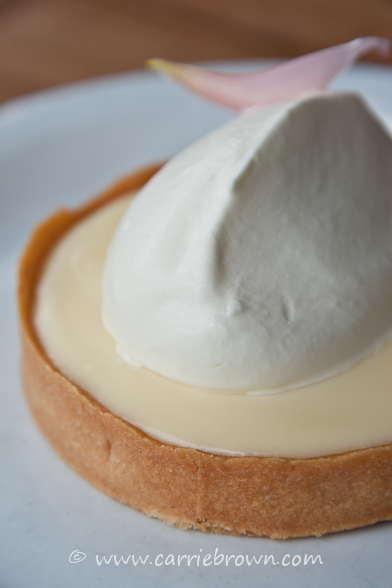 Here’s something I think I’ve shown you before; but please bear with me here.  Indulge me for just a few moments.  I went here many times the week I was in San Francisco, and this is my favorite shot of the trip.  I still love this image.  I can still feel the sun and the gentle sea breeze on my face as I stood with my toes in the warm sand, watching the ocean roll in and roll out.  Roll in and roll out.  I breathed in peace and tranquility.  I breathed out stress.  It was quite magical. 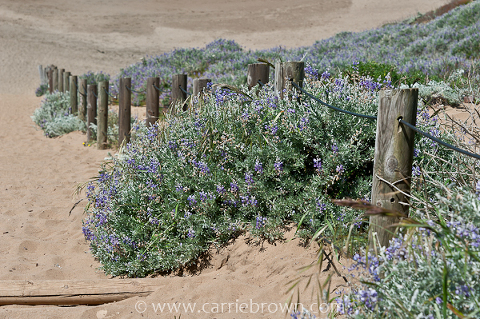 If you’re wondering where the hiccup was in my week, I’ll tell you.  It was at DeLessio, where I had the worst cupcakes I have ever bitten into.  You may find this hard to accept, but I threw some of each one away.  I know.  Can you even believe I relegated cupcakes to the trash?  A veritable travesty!  In this case, however, the travesty would have been subjecting my body to one more crumb.  Trust me on this one.

They looked pretty enough.  The Chocolate Caramel Sea Salt Cupcake proclaims to be the best cupcake on earth.  Yikes. 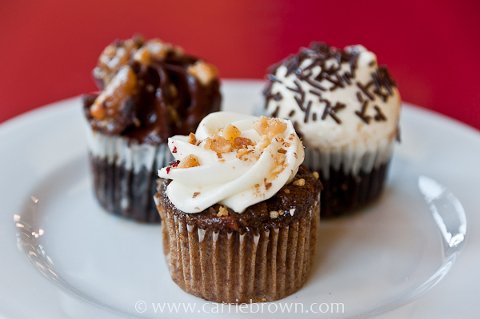 The cake was so soggy you could have balled it up in your hand and squeezed liquid out.  The frostings tasted so artificial I wondered which lab they grew up in.  Truly, they were nasty.  I am so glad I only bought mini ones. 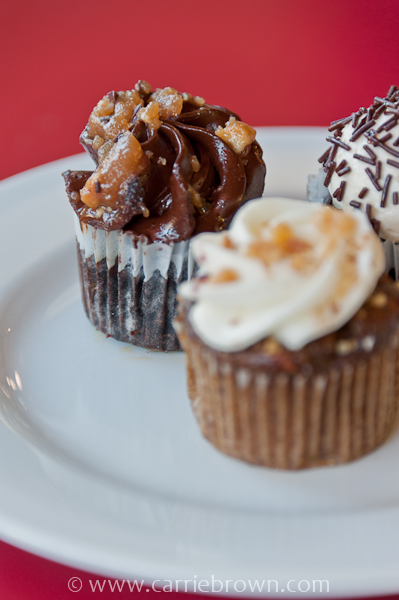 Hey, if we didn’t experience the bad, we wouldn’t recognize the good, right?  And that goes for a lot more than cupcakes.

One thing I have never found a bad one of is something that I have a huge affection for: fences.  If you’re new here (welcome!), let me explain about this whole fence thing. When I am on a road trip I do a pet project called “Fence of the Day”.  Every day I shoot a fence and post the image on Facebook.  Turns out I am not the only one who loves a good fence.  I’ve even been heckled for missing a day.  So to wind up my trip report, here’s some Fence of the Day shots, à la San Francisco. 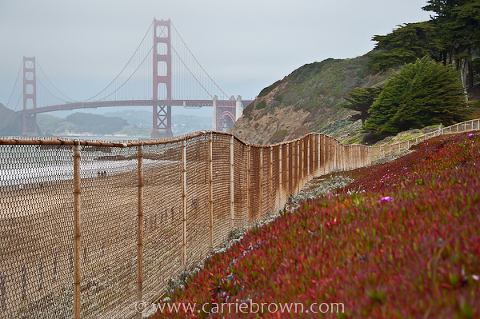 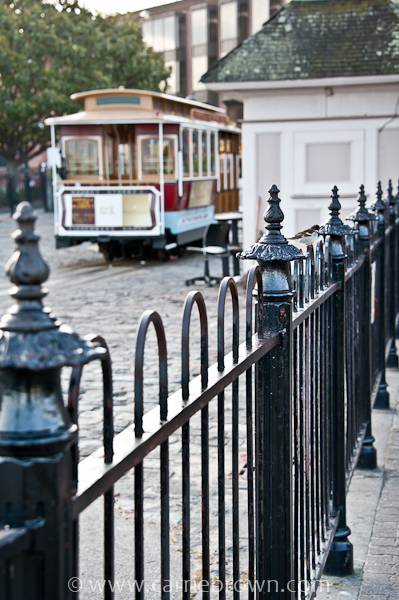 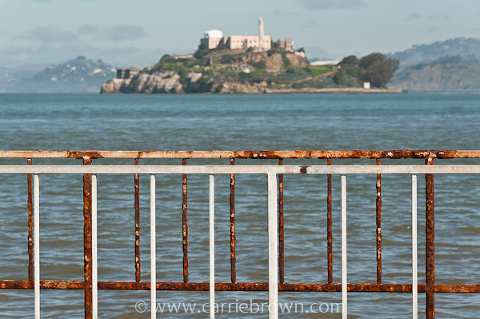 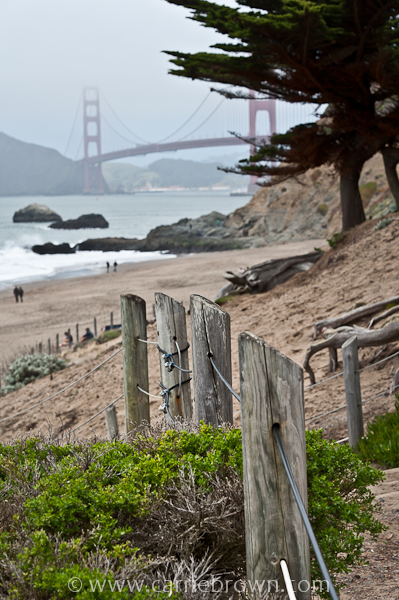 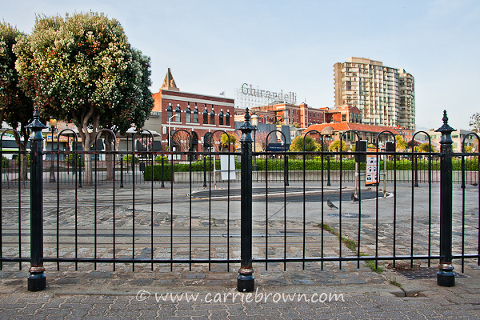 San Francisco, I simply adore you.